Your Genotype; Your Future

By Maryam Adegoke    Genotype remains one of the most controversial health issues widely discussed among people, especially partners considering marriage and reproduction. The reason for this cannot be overemphasized as incompatible genotype union comes with mental and financial stress.   Before I continue, what’s your genotype? Do you know your partner’s genotype? Have you taken your time to read about genotype compatibility and how you can avoid risking…”
Yusuf
featured Health 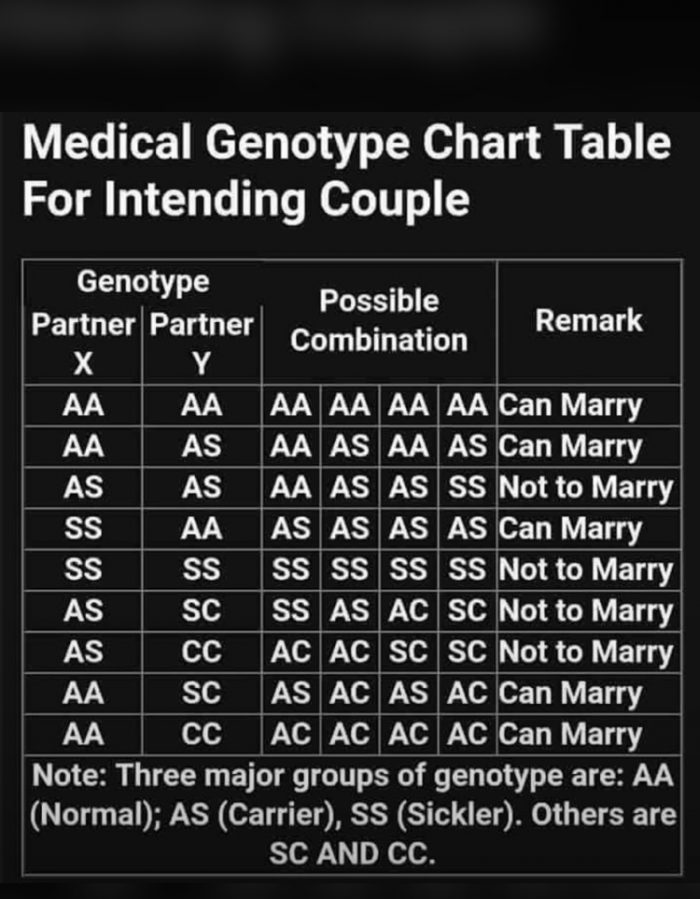 Genotype remains one of the most controversial health issues widely discussed among people, especially partners considering marriage and reproduction. The reason for this cannot be overemphasized as incompatible genotype union comes with mental and financial stress.

Before I continue, what’s your genotype? Do you know your partner’s genotype? Have you taken your time to read about genotype compatibility and how you can avoid risking the lives of your unborn children? Do you know that the combination your genotype and your spouse deteremines that of the child? Are you mindful of the implications of incompatible genotype between two lovers? Let’s talk about these questions one after the other, but I will advise that we add the “What is your genotype” question to our first date questions.

Genotype according to research is an individual’s collection of genes. The term also can refer to the two alleles inherited for a particular gene. The genotype is expressed when the information encoded in the genes’ DNA is used to make protein and RNA molecules. The expression of the genotype contributes to the individual’s observable traits, called the phenotype. Simply put, genotype is the genetic constitution of an individual organism.

Genotype is different from your phenotype which is a description of your actual physical characteristics such as your eye and hair color, the history of diseases and character traits. It is very important you know your genotypes before you say yes to your partner, because your yes means that you are ready to spend forever with such person, and forever is a very long time to be miserable. The main thing to look out for in a genotype compatibility test for intending couples is the sickle cell disease ( a recessive disorder). It is a very serious and critical medical condition with high prevalence rate in Africa south of the Sahara.

Types of genotypes present in humans are AA, AS, AC, SS. These types of genotypes refer to the hemoglobin gene constituents on the red blood cells. Genotype AA and AS are both normal and common. Genotype AC is considered abnormal and rare, SS; abnormal and common. Genetic specialists refer to them as sickle cells. The genotype of a child is determined by the combination of the genotypes of the parents. Mostly, children born of same parents have different genotype- exceptions can be twins, triplets, or multiples that were in the same womb.

Also, genotype is commonly referred to as blood group, which is totally wrong. Genotype and blood group are entirely different from one another. Blood group or blood type is a classification of blood based on the presence and absence of antibodies and inherited antigenic substances on the surface of the red blood cells (RBCs). The antigens may be proteins, carbohydrates, glycoproteins, or glycolipids, depending on the blood group system. There are four main types of blood groups A, B, AB, and O. Each person’s blood group is determined by the genes they inherited from their parents. The major similarity between blood group and genotype is they are both determined by parents.

Genotype and the carrier “SS” are concepts I got familiar with as early as age 13. We shared flats with some middle aged couples who always had reasons to visit the hospital because they had a daughter who was SS whom we will be referring to as F. It is suffice to note that there was a twin before F but one them died at birth and the other a few days after her 5th birthday.

After F was born an SS, her chances of surviving were slim to everyone and the reason for this can not be farfetched. This was evident in peoples relationship with her as no one wants to be a victim of her death. Teachers in our school never chastised her even when necessary. Having grown up in a polygamous home, My father was an AS and my step mum was an AS too… They had 2 carrier children of which one died at birth and the second child died few days after her 5th birthday! a 5year old looking like a toddler all through her life, her eyes were always deep yellow that at a sight of her eye, you’d have reason to question God “why”.

It was very difficult for everyone in the house to fully concentrate on whatever they were doing each time she is around because you’d have to keep an eye on her to know if she was breathing or was fine. She experienced different pain many of which we don’t understand, received numerous blood transfusion, Today she got blood, tomorrow she is getting another again. She was always in and out of the hospital. When she was 3yearsold, she had a terrible pain crisis. She was given medication but she wasn’t responding. Her pain and health continue to worsen, she was rushed to the emergency unit of the hospital.

The list is endless of how the lackluster attitude of people to understanding the essence of knowing their partner’s genotype before getting to start the life contract. It is a situation of one deaths too many of the situation which has continued to rear its ugly Head for decades. In fact, the peculiarities of spending so much more in terms of monetary value and other sundry challenges which plagues the sojourn of a stickler on earth makes it imperative to follow the necessary steps to avoiding the possibility of other stories that touch.

For intending couples, it is non-negotiable for the duo of partners to do routine medical checkups especially as it relates to Genotype. Many have resorted to the blame games as to the causative effects of deaths as a result of non adherence to medical prescription during the process of the relationship.

Married couples but without the awareness of genotype should be encouraged to do it to further safeguard the society. Those who are living currently with sickle cell should be always be supportive to helping them navigate through the hard times. Good news there are some survivours today.
Everyone should be alive to the awareness. Genotype is as important as that Aso Ebi, Jollof and the other paparazzi of marriage. It is as important. Play your part. Let the reason for love be worth it at the end!
Maryam Adegoke is a 400-level student of English and International Studies, Osun State University.

Magu: Nobody Is Above Scruitny – Presidency

It Would Be Difficult For Aregbesola’s Successor – Sen. Mudasiru Hussein