Ismaeel Uthman YORUBA is very rich in culture and tradition. The glamour of the Yoruba culture and tradition resonate in various festivals of ancient towns in the South western part of Nigeria. Each town in Yorubaland has her own distinctive festival(s) that appeals to non-Yoruba speaking people to participate. Aside from traditional rites which…”
Yusuf
featured hero Op-Ed 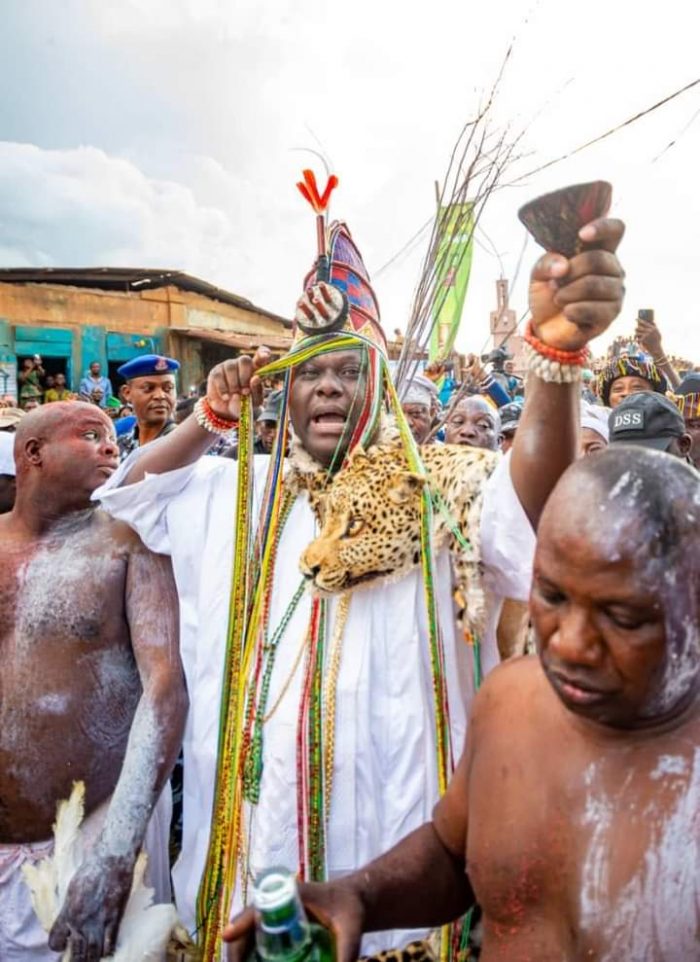 YORUBA is very rich in culture and tradition. The glamour of the Yoruba culture and tradition resonate in various festivals of ancient towns in the South western part of Nigeria. Each town in Yorubaland has her own distinctive festival(s) that appeals to non-Yoruba speaking people to participate. Aside from traditional rites which are core activities that are always seclusive, the Yoruba festivals are adorned with cultural display to entertain the audience.

One of such beautiful and popular festival is Olojo Festival in Ile-Ife. Ife is the cradle of Yoruba race. It is an ancient city in South-western Nigeria. The city is located in the State of Osun, and it is about 218 kilometers northeast of Lagos. The town lies at the intersection of roads from Ibadan (40 miles [64 km] west), Ilesa, and Ondo. It is one of the larger centres and probably the oldest town of the Yoruba people.

Olojo is an occasion held in celebration of the “Ojo ti Ojo di jo” which literally means the day of the first dawn, believed to had been first experienced in the historical city. It is also an event celebrating Ogun, the god of iron, Sango, the god of thunder and Aje, goddess of richness. The event is an embodiment of culture and tradition.

The 2022 edition of the Olojo festival was held between Friday, September 23 to Monday, September 26. The four-day event was themed “African Continental Free Trade Area: Showcasing Domestic Tourism With Olojo Festival”.

The festival started with Ojo Ilagun which is manifested in the Iwode, a community cleansing rite. There was also a terrestrial message from the Ooni of Ife, Oba Adeyeye Enitan Ogunwusi, Ojaja II, to the people of Ile-Ife and to the world. Ooni’s Adire Hub Fiesta, a showcase of the City’s indigenous local fabrics, the Adire Oodua, was also featured prominently on the first day of the Olojo festival .

The third day was Ojo Ajoyo or Asekagba on which presented Ooni’s Grand Royal invitational reception.

Known as Ojo Ibile, the Ooni’s ancestral traditional propitiation as well as a cultural talent hunt was held last Saturday which was the peak of the festival. The event was witnessed by prominent Nigerians and tourists from the world over.

OSUN DEFENDER reporter was at the event and noted that Olojo festival is a unique annual culture event that attracts millions of people and gets the ancient city agog. Members of different occultic groups were openly displaying their identities. It was a no hold back traditional event with maximum security operatives. There was no incidence of violence before, during and after the event held at Enuwa Square, the Palace of the Ooni of Ife.

Traditional rites which are not harmful to the people were openly performed at the festival. There was procession for the wizards, supernatural human being, appeasement of the god of riches. Cultural performance was also held to showcase Ogun, the god of iron and Sango, god of thunder.

A middle-aged man who incarnated Esu, (the divine messenger, trickster god of chance, principle of indeterminacy, and essence of fate among the Yoruba traditional believer) was seeing drinking a cock’s blood after decapitating its head. The man was moving round the premises of the event with the dead cock hanging on his left shoulder.

After the cultural displays and open traditional rites, the Ooni of Ife retired to Ile Aare to wear the ancient Aare crown. The crown is said to weigh 50kg and would only be worn by Ooni after special rites, among which is a seven-day seclusion before the start of Olojo festival. After wearing the crown, Ooni was seen in different form. He appeared possessed by some spirits, but he was also averagely conscious. His walking steps was not balance as he managed to pray for the people of Ife, the ancient town, Osun and Nigeria at large. He was walking amidst conventional and traditional security operatives. There were also some long-cane-wielding men who were scaring bystanders away to create a clear part for Ooni.

At the event was President Muhammadu Buhari who was represented by the Minister of Interior, Ogbeni Rauf Aregbesola.

In his goodwill message, Buhari charged Nigerians to restore the old glory of the country in farming, saying that the bedrock of Nigeria’s economy was famously known to be agriculture.

The president said farming is the only solution to end hunger and food insecurity. He recalled that Olojo festival showcased Yoruba culture at its best. It was in the olden days a socio-cultural event to showcase farm produce, hardwork and declaration of agricultural profits.

The President also tasked Nigerians on collective effort in ending insecurity in Nigeria, saying that security agencies should not be left alone to tackle various threats facing the nation.

He said: “Olojo festival was an event in the olden days to showcase farm produce, profits made in farming and agriculture at large.

“It will gladden my heart if Nigerians could restore the old glory of farming; this Olojo festival too should also bring back the old days of showcasing farm produce, hard work and good character.

“We are collectively responsible for provision of security. The government will do its own while the people should also support the security agencies. We should report any suspicious move or person in our environment to the security agents.