They Are Starving Us, Nigerian Soldiers In Maiduguri Lament 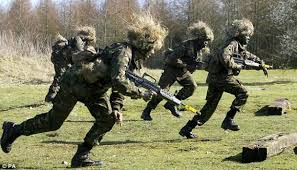 Nigerian Soldiers in the battle field fighting terrorism (Boko Haram) have cried out to the public accusing their commander of starving them.

Lieutenant Colonel S.A Ochalla, the Commander of the 145 Battalion, Damasak Maiduguri, Borno State has been accused by a soldier onbehalf of his colleagues in the battle field of starving without any excuse or reason for such.

According to the soldier who spoke to newsmen on the condition of anonymity said, “the troop (Soldiers) are not pleased with how they are treating us, that our two months allowance called cigarette allowance has not yet been paid”.

In his statement, the soldier said, “the Nigerian Army is corrupt considering this practices of the Commander without any justification”.

The soldier who spoke with newsmen stated, “We soldiers of 145 Battalion Damasak, Maiduguri, Borno are dying of hunger and we are not comfortable at all, Lieutenant Colonel S.A Ochalla who is our commanding officer refused to feed us for four to five days now. He has refused to give us our March and April allowance. The world should come to our rescue”.

He said, “No water and food to sustain with as we are talking and we have to fight on regardless, because our life come first before food. Despite in this condition, we are still combating insurgents in Borno”.

The soldier on behalf of his colleagues calls on the Public to help prevail on their commander to do the needful as a matter of importance, so they can deliver for the progress of the nation as determined soldiers.

BREAKING: One Dead, Many Injured As Masquerade Attacked Mosque In Osogbo