The Peoples Democratic Party (PDP) has suffered a painful blow in Oyo state as the former Secretary to the State government under the administration of ex-Governor Rasidi Adewolu Ladoja, Chief Ayodele Adigun at the weekend defected to the ruling All Progressives Congress (APC). Report had it that Adigun, a former permanent secretary in the Oyo…”
Editor
Politics 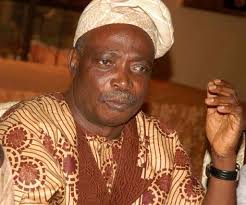 The Peoples Democratic Party (PDP) has suffered a painful blow in Oyo state as the former Secretary to the State government under the administration of ex-Governor Rasidi Adewolu Ladoja, Chief Ayodele Adigun at the weekend defected to the ruling All Progressives Congress (APC). Report had it that Adigun, a former permanent secretary in the Oyo state civil service joined APC officially after he was registered in his ward 8 area of Ibadan North East Local Government.

It was gathered that Adigun was received by party leaders, among whom were former commissioner for information and orientation in the state, Prince Gbade Lanan, who expressed happiness over his arrival in the party. Oyo state chapter of the Peoples Democratic Party (PDP) is presently engulfed in another survival crisis as leaders of the party on Saturday, November 4, held two separate state congresses. The congresses were held simultaneously at Baptist Secondary School, Oke-Ado and Watershed ground, Old Ife road, both in Ibadan, the state capital.

It was gathered that Chief Jacob Adetoro emerged from Oke-Ado congress and Alhaji Kunmi Mustapha emerged from Watershed congress. According to a report, one major reason the two parallel congresses held was due to failure of the leaders to agree on how to share party executives among different interest groups within the Oyo PDP. It was also learnt that a meeting to broker peace between the two groups was fruitless. But despite the development, leaders of the party insisted that Oyo PDP remained one and is determined to capture power in 2019. Those at the Watershed ground include former Governor of the state, Senator Rashidi Ladoja, Chairman of the party’s caretaker committee, Hon. Tunde Akogun and other stalwarts of the party. At the Oke-Ado congress were former Social Democratic Party (SDP) governorship candidate in the state, Engr. Seyi Makinde, Senator Hosea Ayoola Agboola, Hon. Mulikat Adeola Akande, Alhaji Hazeem Gbolarumi, Alhaja Bose Adedibu, Hon. Oluyemi Taiwo Hon. Tirimisiyu Okunola, and Hon. Dare Adeleke.

The Oke-Ado congress also produced Chief Ogunlade Segun‎ as Vice Chairman and Mr. Wasiu Adeleke as Secretary. There were over 750 accredited delegates at the venue. The Watershed congress on the other hand produced Alhaji Wasiu Emiola as state secretary and Engineer Akeem Olatunji as publicity secretary. It was conducted by Senator Liyel Imoke, former Cross River governor and in attendance were INEC officials. Addressing party members, party chieftains at Oke-Ado, Senator Agboola, Akanda Gbolarumi and Alhaja Adedibu, denied the insinuation that there was rancour among PDP leaders in the state.

Makinde in the same vein declared that leaders of the Oyo PDP have resolved to work together to ensure that the political party returns to power in Oyo in 2019. Makinde added that: “What we are witnessing here today is normal in politics. There is no rancour among us. “What we are doing here today will lay foundation for our party to return to power in 2019”. Meanwhile, it was previously reported that Senator Rashidi Ladoja, former governor of Oyo state joined the race for the national chairmanship of the Peoples Democratic Party (PDP).