The Reign Of Abba Kyari By Tunde Odesola

(Published in The PUNCH on Monday, April 20, 2020) So much dust has been raised since Abba Kyari bit the dust last Friday. When he walked the surface of the earth, the Chief of Staff to the President, Major-General Muhammadu Buhari (retd.), was omnipotent. He was a sociologist and a lawyer – two unique…”
Yusuf
featured Op-Ed 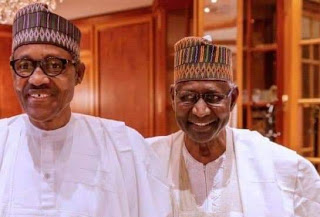 So much dust has been raised since Abba Kyari bit the dust last Friday. When he walked the surface of the earth, the Chief of Staff to the President, Major-General Muhammadu Buhari (retd.), was omnipotent. He was a sociologist and a lawyer – two unique fields that expound theories and ideas in human behaviour and regulation. Kyari combined his learning with the abdication of powers by Buhari to emerge the most powerful CoS in the history of the country. James Arogbofa was the random CoS to President Goodluck Jonathan. He never had Jonathan in his pocket.

When Kyari coughed, service chiefs shivered. When he sneezed, the Office of the Vice-President got goose pimples. When he yawned, ministers clapped. When he spoke, his word came to pass. Even Aisha who belongs in the ‘kitchen and the other room’ failed woefully to turn Buhari against Kyari. She tried hard, but she failed. She employed emotion and the media, she failed. Kyari was Buhari and Buhari was Kyari. Mammam Daura, the unelected but all-powerful 80-year-old uncle of Buhari completes the comatose Fulani-Kanuri gerontocratic trinity at the apogee of Nigeria’s rulership.

Upon the death of Kyari, the land was expected to be soaked in tears. Grief and heartbreak ought to be enrobed in green and white sackcloths. Mourners should see one another in glistening tears streaming down sorrowful cheeks. Nigeria should quake in gloom. But none of these is happening; the land is not mourning Abba, the son of Kyari. The land only opened up and swallowed his body, never to be seen again.

Haba! Since the bell tolled for Abba, the land is not soaked in tears. But the wind echoes drum beats of comeuppance and indifference. In countless communities across the land, fists punch the air. Flutes float on songs. Online and offline, many laugh and rejoice, happy that a calamity has befallen Aso Rock. They smack their lips and taunt Aso Rock to carry its pots of ashes alone. This is the tragedy of governance or misgovernance, if you like. Nigerians’ indifference to the death of Kyari is embedded in the distance between the Buhari regime and the Nigerian masses he swore to serve. The unmourning masses’ retaliatory apathy against Buhari and his hegemony is located in the numberless, undelivered electoral promises; the suffocating inaction and creepy-crawly corruption that have characterised the nepotistic administration.

I won’t mourn Abba Kyari. I won’t gloat over his death, either. For death is the iron curtain that falls with a finality before the actor on stage performs his finale. One day, some day, everyone is going to kick the bucket. It’s Kyari today, it could be me tomorrow or you, yes you, the reader, next week. Whenever I go to my grave, I look forward to being judged solely by the deeds of my hands. I don’t expect to gain eternity through unanswerable prayers by clerics for the repose of my soul. For it is appointed unto men to die once, after death – judgment. I know for a fact that no amount of eighth-day firdaus prayer or memorial commendation service will change a scarlet list of endless sins into a whiter-than-snow, paradise-deserving passage to eternity.

Tyrants, their cohorts and the ignorant will always say, “Shhh! Don’t talk ill of the dead!” Yet, they read history books stuffed with the villainies of Adolf Hitler, Osama bin Laden, Sani Abacha, Illiya Bisalla, Bukar Suka Dimka, Basorun Gaa, Efunsetan Aniwura, etc and talk about them. Are these villains still alive? These naysayers never stop to think that if God doesn’t want mankind to learn and talk about the dead, the Holy Bible and the Holy Quran won’t brim with the stories of tyrants.

True Christians pray daily to be like Jesus Christ, the son of God. The same way true Muslims seek to emulate the holy Prophet Muhammed (SAW). If Christianity, Islam, African religions, Buddhism etc preach afterlife punishment and reward, there’s nothing wrong in believers taking notes from the lives of departed men and women. It’s not being judgmental. It’s exploring God’s innate freewill deposited in Man. That’s why He created Man in His own image. Particularly, Jesus, in Matthew 10:34, says, “…you are gods!” Similarly, David says in Psalm 82:6, “You are gods, And all of you are the children of the Most High.”

Kyari is dead. I’ll leave, entombed in peace with him, the legacy of his public service. The countless number of articles churned out in favour or disfavour of him since his passage amplifies Nigerians’ desire for good governance. It also shows Nigerians’ growing impatience to break away from the past stupidity of turning the other cheek and keeping silent in the face of poverty, diseases, hunger and government’s indolence. I’ll interrogate Kyari’s last five weeks on earth and attempt to show why Nigerians on the street fail to feel his demise.

Breaking the news of his coronavirus infection, Kyari told Nigerians that he had made his ‘own care arrangements to avoid further burdening the public health system, which faces so much pressure’. But Nigerians weren’t fooled. They knew that the decrepit nature of public hospitals informed Kyari’s preference for the much more efficient and costlier private hospital that he ostensibly checked into in Lagos. Public healthcare facilities treating COVID-19 patients, even now that the country’s cases are rising, are not burdened. Though sick, Kyari still engaged in the syllogism of his health.

Integrity embraces transparency. Corruption cuddles secrecy. From Europe to America to Canada, Australia and Asia, the world battles coronavirus with openness. The infection, treatment and healing of British Prime Boris Johnson; wife of Canadian PM, Gregoire Trudeau, and many global personalities were splashed online across the world. But the whereabouts and treatment of Kyari were kept away from Nigerians. The terse statement from the Presidency announcing his death was like a secret cult signal, giving no information about his age, his underlying illnesses, the hospital where he died and his family. If the Presidency says that Kyari had the right not to disclose his medical information, I’ll ask: why did he publicly disclose his infection and course of treatment?

Many Nigerians on social media hailed the coronavirus as a leveler. They said it was the first time privileged government officials couldn’t twitch their noses as they went through dingy Nigerian airports to hop on the next flight for medical treatment abroad. If governments had fixed facilities back home, the ridicule officials faced today wouldn’t have occurred. The situation got to a head for Aisha Buhari in 2017 when she lamented that the over N3.2bn budgetary allocation to Aso Rock Clinic in 2017 was money down the drain as the facility had no syringe. It’s to the eternal shame of the Buhari regime that there was no public hospital in the FCT that could treat Kyari. Medical tourism by government officials isn’t only a waste of public funds, it’s also a veritable avenue for corruption.

Nigerians weren’t oblivious of the sheer hypocrisy in Kyari’s burial. Information Minister, Lai Mohammed, had earlier warned that the Federal Government won’t release the corpses of patients that died of COVID-19 pandemic to their families. But not only was Kyari’s corpse released for public burial, the number of the people at the burial was far more than the few people at the house party actress Funke Akindele threw for her husband. While Funke and her husband were convicted and the people that attended her bash underwent self-isolation, hundreds of potential vector-dignitaries that attended Kyari’s burial departed to mingle with the society.

STRIKER: Where Are Our Popular Organisations?