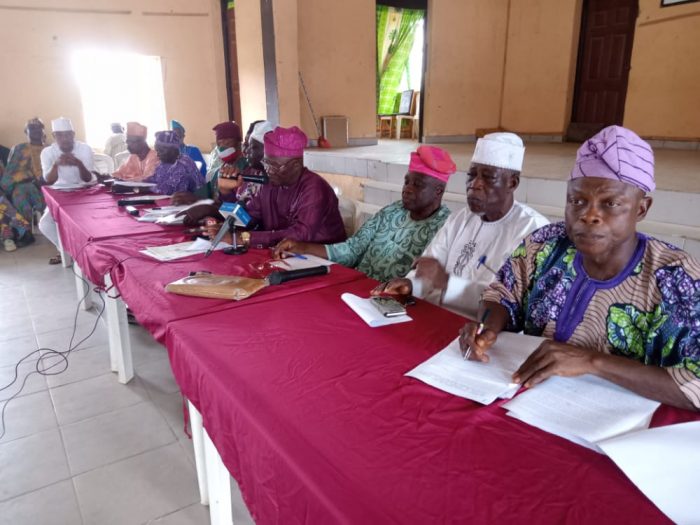 It was gathered that the former Chief of Defense Staff, General Alani Akinrinade (Rtd), who hailed from Yakooyo, and other personalities in the affected communities have made several efforts, but all to no avail.

Findings showed that the only transformer (7.5MVA) that connected all the affected towns had spoilt four months ago due to heavy load placed on it.

The Communities demanded that the transformer, 7.5MVA Substation at Moro be upgraded to 14kv transformer.

Speaking at a press conference held at the hall of Ipetumodu on Thursday, leaders of the communities under the aegis of Ife North Progressive Presidents, appealed to the Ibadan Electricity Distribution Company (IBEDC), to find a solution to the blackout and restore electricity back to their towns.

They also appealed to the State Governor, Adegboyega Oyetola, to intervene in the matter, saying that the situation has subjected residents of the affected towns to danger.

Speaking with newsmen, the president, Yakooyo Progressive Union, Prince Oyebowale Adewale, Chief Julius Olaleke Ojediran, representing Asipa, and other leaders from different communities, said the blackout has given kidnappers and other criminals opportunity to carry out heinous crime in the towns.

According to them, “the blackout has encouraged stealing in the communities. At Asipa town, a shop was recently looted by the thieves taking the advantage to perform their bad act in the darkness.

“The total blackout has paralysed the economic activities in the local government. Those people using electricity to do their daily works find it very difficult to transact their business and this need urgent attention so that the society will not become desolate.”

Noting that some business owners have run into debts as a result of the blackout, the communities said, “if IBEDC does not want any problem in the local government, positive action must be taken on time.”

Echoing a similar views, President of Ipetumodu, Sunday Oyebowale, said the substation is grossly inadequate and requires a total upgrading and overhauling. He said, “It is very sad and very disheartening to note that Ife-North Local Government have been experiencing total blackout four months ago and nothing has been done by the IBEDC to alleviate our problem.

“The total blackout has been encouraging kidnapping of people, as we know that when there is no light, nay bad cat is easy to perpetrate. Non supply of electricity has encouraged theft in the communities. At Asipa community, a shop was looted by thieves who took advantage of the darkness; this same problem had been reported in many areas in the local government.

“Our economic activities have been paralysed as people using electricity to do their daily works find it very difficult to transact their businesses and this need urgent attention so that the society will not become desolate. Ife-North has been known for peace but this absence of light has made it to be a lawless society where different people just come into the Local Government unchallenged at night. Out System Government and the IBEDC must make sure that positive step is taken before things go out of hands.

“We have written several letters to the State Governor and the IBEDC even to their main office in Ibadan but nothing has been done. We are imploring people in authority and Nigeria Government to stand up and assist us so that we won’t continue to suffer,” he said.

Meanwhile, students of tertiary institutions and secondary schools, tripped out with banners of various inscriptions such as “Governor Oyetola, Come To Our Aid,” “IBEDC is Paralysing Our Economy in Ife North,” “We Say No To Darkness,” “IBEDC, Bring Back Our Light,” among others.

The students, led by Aduragbemi Ogunlola, urged the IBEDC to take urgent steps at restoring the electricity before it lead to mass mobilization for protest.

Women Are More At Risk Of Developing Chronic Kidney Disease