The federal government has inaugurated an inter-ministerial committee to tackle the illegal refining of crude oil in the Niger Delta. Members of the committee are drawn from the ministry of defence, Nigerian Army, navy, defence headquarters, Nigeria Security and Civil Defence Corps (NSCDC), Nigerian National Petroleum Corporation (NNPC), ministry of justice, ministry of environment,…”
Olamide
News 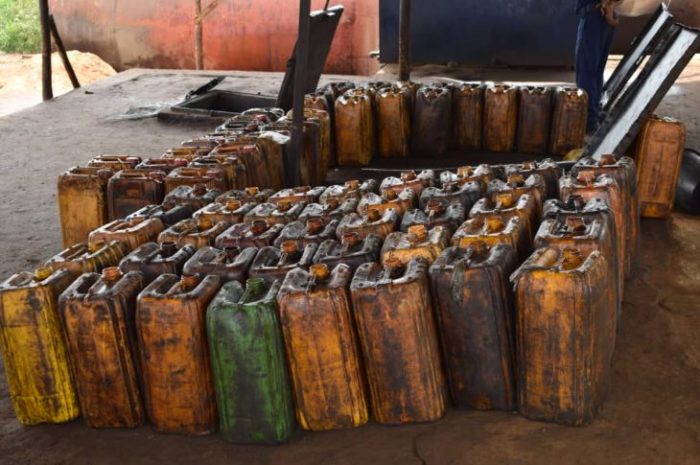 The federal government has inaugurated an inter-ministerial committee to tackle the illegal refining of crude oil in the Niger Delta.

Speaking at the inauguration of the committee on Thursday, Umar Mohammed, acting solicitor-general of the federation who represented the attorney-general of the federation.
According to him, “the mandate of the committee is for “the recovery of illegally-refined petroleum products (crude oil) in the dug-up pits found around the creeks of the Niger Delta in line with the policy of the current administration on security and economy, as well as the preservation of the environment from negative hazards.

“The office of the honourable attorney-general of the federation and minister of justice, in collaboration with all stakeholders, have put in place a mechanism for effective and efficient management of illegally-refined products recovered from dug-up pits found around the creeks of the Niger Delta.

“This mechanism was agreed by the relevant stakeholders and submitted to the honourable attorney-general of the federation, who considered and approved the establishment of the inter-ministerial committee for the purpose of implementing the mechanism known as standard operating procedure (SOP) for the recovery of illegally-refined petroleum products (crude oil) in the dug-up pit found around the creeks of the Niger Delta.

“The responsibility of the inter-ministerial committee is to detect, report, evacuate, assess and ensure transparent disposal of the product with due consideration to the environment.

“The inter-ministerial committee shall be guided by the SOP, developed for the project. The content of the SOP is drawn from the provision of the Asset Tracing, Recovery and Management Regulations 2019.

“It is my hope that the proceeds from this exercise will be a source of additional revenue for the country”, he stated.