On my way to Federal High Court, Lagos recently, my route passed through Awolowo Road. One of the historic structures on the street is Military Hospital. It is to your right if you are coming from Onikan driving towards Falomo. I saw Nigerians trooping in and out of the hospital. And I remember that if…”
Editor
featured hero Oduduwa 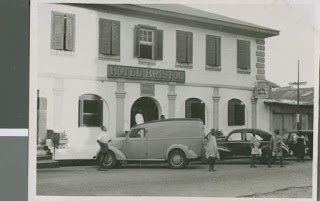 On my way to Federal High Court, Lagos recently, my route passed through Awolowo Road. One of the historic structures on the street is Military Hospital. It is to your right if you are coming from Onikan driving towards Falomo. I saw Nigerians trooping in and out of the hospital. And I remember that if not for the struggles of some Nigerian youths, the hospital could have remained a forbidden territory to Nigerians, at least until independence.

When we talk of apartheid today, it is common to discuss the practice of racial discrimination with reference to only South Africa. This is not entirely accurate. There was a time in this country of ours when Nigerians were prohibited from accessing certain public facilities.

Yes, you read that right. Some hospitals funded by the government were reserved for only Europeans. Some clubs did not admit Nigerian members. Some hotels were not open to people who were not white in colour. Onigegewura had already told you that Pa Tony Enahoro was the first Nigerian to be admitted as a member of the Ikoyi Club.

How was this practice stopped? Who were the young Nigerians who spearheaded the struggle?

Today, Onigegewura brings you the first hand historic account of how the practice was forced to stop. The following account is in Pa Alfred Rewane’s words. And by a very strange historical coincidence, the road named after Pa Alfred Rewane is not far from the Military Hospital.

History Does Not Forget

In 1948, Mr. Ivor Cummings, a distinguished African-Caribbean national and a top official of the Colonial Office in London was scheduled to pay an official visit to Nigeria.  Naturally, his first port of call was Lagos, then our capital. Accommodation was reserved for him at the Bristol Hotel, Martin Street, Lagos, then owned and managed by expatriates.

Apparently, the hotel authorities thought, from the name Cummings, that he was a white Anglo-Saxon. But they were shocked when he presented himself at the reception to find that he was black. He was refused a room at the hotel on that ground.

One witness to the incident was a Warri-based Sierra Leonean legal luminary called T. E. Nelson-Williams. He deeply resented the action of the hotel management but was helpless in the circumstances.

It was a hot and humid afternoon and Nelson-Williams left for the Grand Hotel (now defunct), on Broad Street by Odunlami Street, Lagos, to rendezvous with friends for an afternoon drink. There, he met Frank Olugbake, the trade unionist, and others and narrated to them the Bristol Hotel incident.

They later trooped to the Island Club where they met me and my friends, also having a drink and cooling off in the gentle breeze from the lagoon. The Onikan Stadium was not walled round then. Nelson-Williams told us what had happened, and we were dumb-founded, angry, outraged, furious and bitter.

One of my friends at the Island Club was Oladipo Odunsi, a distinguished and enterprising Lagos lawyer. He stood up and exclaimed, “Our Nigeria of 1948, we cannot have this, let’s go and die.” I jumped up and shouted: “Die? No! Let’s go and teach them a harsh lesson.”

The atmosphere of the club was now charged, and under Odunsi’s leadership, the late Milton Macaulay, the late Akiniran Olunloyo, Prince Adeleke Adedoyin, the late Garnet Williams and others and I marched through the Onikan Stadium, to the Marina.

Our elder friends, the late JK Randle and the late Bolaji Finnih, wanted to join us but we asked them to go and get hold of two lawyers, the late Oladipo Moore and the late Alaba Akerele, and our other colleagues to go to Tinubu Police Station (now defunct) on Customs Street, which is now part of the land on which the Central Bank of Nigeria headquarters is located (then), to wait for us because we were sure that we would be arrested and brought there if we carried out our plan “to die or teach them a lesson.”

At the Onikan Stadium point on Marina, we assembled all sorts of people known compendiously as Boma Boys, who collected their clubs and sticks and horse whips (koboko) and followed us without hesitation, although they did not know our plan or where we were headed to.

We then launched an assault on Bristol Hotel. By the time we finished, the reception, bar and restaurant were sacked and the white men in the hotel premises and its vicinity had a sorry tale to tell. The whole place was wrecked and left in a shambles.

Meanwhile, some police officers arrived on the scene but, surprisingly, did not arrest any of us. The job completed, we trooped back to the Island Club, to a rousing reception and warm congratulatory embrace from members.

But the then chairman of the club, late Mr. Omololu, was deeply concerned about our action, realizing that the then British Governor of Nigeria, Sir Arthur Richards, was himself the grand patron of the club. Mr. Omololu was sure that sooner or later we would be rounded up. We had only a pyrrhic victory and the inaction on the part of the colonial government was no more than the calm before the storm. However, we waited all day but there were no arrests.

Meanwhile, Mr. Omololu contacted our patron, the late Sir Adeyemo Alakija, to intervene with the authorities to preempt our arrest. Subsequently, Sir Adeyemo made an appointment to meet with Sir Arthur in his capacity as grand patron of our club and it was suggested that we who led and participated in the sacking of Bristol Hotel should accompany him. We reluctantly agreed.

A day or so before we were to meet with Sir Arthur, the Governor made a statement to the nation in which he referred publicly for the first time to the Bristol Hotel incident. His Excellency declared that some seventy years previously, there might have been justification for whites and blacks to live apart, for the reason, if none other, that there were some diseases to which whites were immune but which killed blacks, and vice versa.

But for well over seventy years there had existed a medical department in Nigeria maintained at public expenses to find a solution to the problem and if no solution was found, then there was left only one of two choices, that is either to continue to live apart and abolish the medical department or to live together and continue to maintain the department.

Sir Arthur then declared: “I have chosen the latter. With effect from today, there will be no more European hospital, club or reservation in Nigeria.”

Led by Sir Adeyemo and Mr. Omololu, we later went to meet with Sir Arthur at Government House, Marina. Naturally, we expected a hostile reception, but we were widely mistaken. Sir Arthur, undoubtedly tempered by age and maturity and experience, welcomed us warmly, smiled broadly and, turning to Sir Adeyemo, said jokingly something in words like these:

“Sir Adeyemo, I did not make my statement because of your young rascals, who took the law into their hands, but deliberately to preempt an imminent danger. This is the first time that violence has been introduced into the public life of Nigeria, and once it started, it may never recede. I have seen it happen in many countries where I served, in India, Burma and the Caribbean. My statement, therefore, was to prevent violence spreading.”

Apparently, Sir Adeyemo expected us to apologise to Sir Arthur but we never did. The Governor then turned to Sir Adeyemo and asked: “Will you and your friends like to have a drink with me?” Sir Adeyemo thanked the Governor for the invitation but expressed regret that we had no time and had to go.

On our way back to the Island Club, travelling in two cars, all of us somehow began to develop a guilty conscience about what we did at the Bristol Hotel. This was because Sir Arthur, who had the security agencies and the full force of British imperial might behind him, chose to completely disarm us with his charm and unprecedented diplomacy.

At the club, Odunsi was the first to speak. He addressed me and asked me how we could be sure that, in fact, all the white men we attacked at Bristol Hotel supported racial discrimination and the treatment meted to Ivor Cummings? Was it not possible that many of our victims would have disapproved of the treatment? How could we be sure that many of them were not innocent persons who did not even know what happened to Ivor?

We felt thoroughly ashamed that in prosecuting a worthy cause, we might inadvertently have wronged innocent people. We were all convinced that if a similar act of discrimination was re-enacted, we would never yield to violent reaction as we did at Bristol Hotel.

Sir Arthur had taught us, as youths, an enduring lesson – to be responsible and give peace and reason a chance.

I hope next time you are on Alfred Rewane Road and Awolowo Road in Ikoyi, you will remember this story and its inherent lessons.

May the soul of Pa Alfred Rewane continue to rest in peace.

Uzodinma Takes Over As Imo Governor, Promises To Deliver