Governor of the State of Osun, Ogbeni Rauf Aregbesola; the state House of Assembly and Secretary to the State Government, Alhaji Moshood Adeoti have congratulated Muslims in the state for witnessing the beginning of the month of Ramadan, urging that they should use the period to move closer to Allah. The governor in his Ramadan…”
Yusuf
Osun 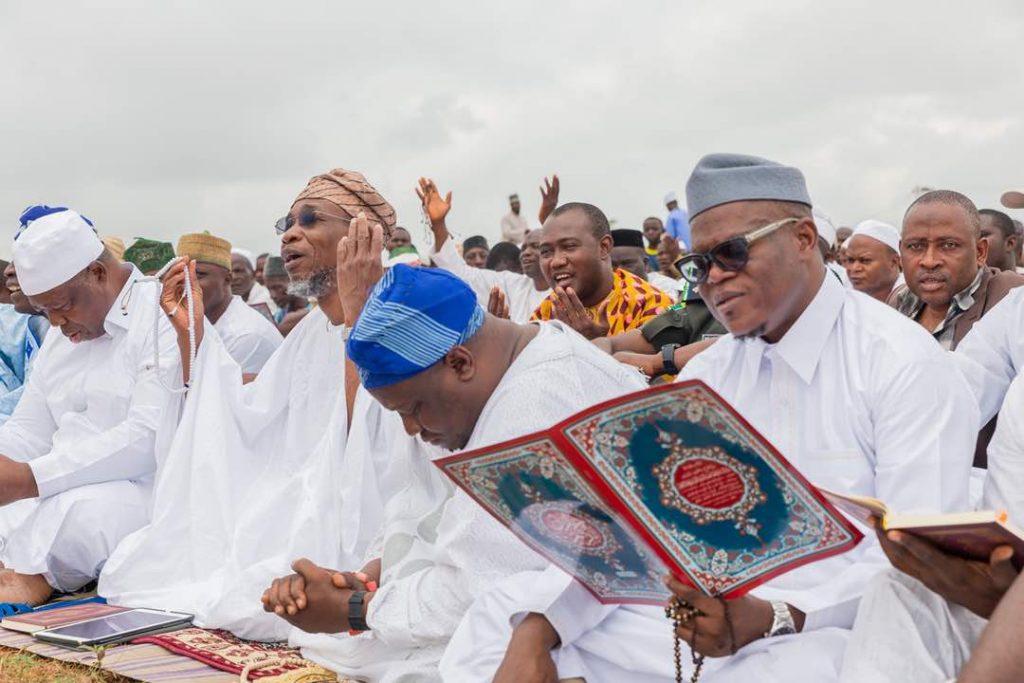 Governor of the State of Osun, Ogbeni Rauf Aregbesola; the state House of Assembly and Secretary to the State Government, Alhaji Moshood Adeoti have congratulated Muslims in the state for witnessing the beginning of the month of Ramadan, urging that they should use the period to move closer to Allah.

The governor in his Ramadan message to Muslims in Osun state and Nigeria on Wednesday signed by the Media Adviser to the Governor, Sola Fasure, charged Muslims in the country to observe Ramadan with best practices and share love with fellow Muslims and neighbours.

Aregbesola said: “I am most pleased to see the beginning of this year’s Ramadan. Ramadan is that period when Muslims worldwide engage in fasting – a physical and spiritual act of self denial, cleansing, prayer, fellowship and charity.”

“As one of the pillars of Islam, Ramadan is also a time of deep consecration to spiritual matters. It is therefore a time of spiritual awakening and commitment to the tenets of Islam.”

“Let us be sober and do all things with moderation. Let us remember the poor, the sick, the beleaguered and those in one difficulty or another in our prayers and work of charity.”

“As we celebrate this great festival of the religion of peace, may the peace and comfort of Allah SWT rest upon us, our family, community, state and nation.”

“This is wishing all Muslims Ramadan Kareem, with love and grace on behalf of the government and the good people of Osun,” the Governor said.

Also, the House of Assembly under the leadership of Hon. Najeem Salaam in a statement by its Chairman, House Committee on Information and Strategy Olatunbosun Oyinmtiloye said witnessing the Holy Month of Ramadan which is renowned for core worship is a great blessing made possible by Allah.

The parliament urged Muslims to use the period to renew their commitments to the virtues of love and peace taught by the Holy Prophet Muhammad and also work towards achieving them.

The assembly noted that the period was one of the spiritual virtues, which entails perseverance, temperance, introspection, and retrospection with the Almighty Allah.

While wishing the Muslim faithful blessed Ramadan, the Assembly urged them to also remember the less privileged in the society and pray for their beloved state during the special period.

In his own message, the SSG, Moshood Adeoti enjoined Muslims to observe the Ramadan with fervent prayers for the state and the nation at large.

In a statement personally signed by him, Adeoti urged that the period should be used by all Muslims to pray for the country in general and the state in particular, admonishing all practicing Muslims on the need to maintain piety throughout the Ramadan period with a view to seeking and securing the favour of Allah during the fasting period.

“Fasting should not be seen as a mere religious rites, but rather as a way of seeking the face of Allah and enhancing the physical well-being of a practicing Muslim.

“The act of going for hours without any food or water intake should be a way of life for every believer of God and a way of maintaining sound healthy living,” Adeoti opined.

The prominent All Progressives Congress (APC) member in the State also admonished Muslims partaking in the ongoing Ramadan not to impose unnecessary financial burden on their family members in an attempt to observe the Ramadan.

Alhaji Adeoti therefore charged all residents in the state to pray along with the Muslims during the holy month of Ramadan for the state to continue witnessing unprecedented development even after the expiration of the current administration in the state.