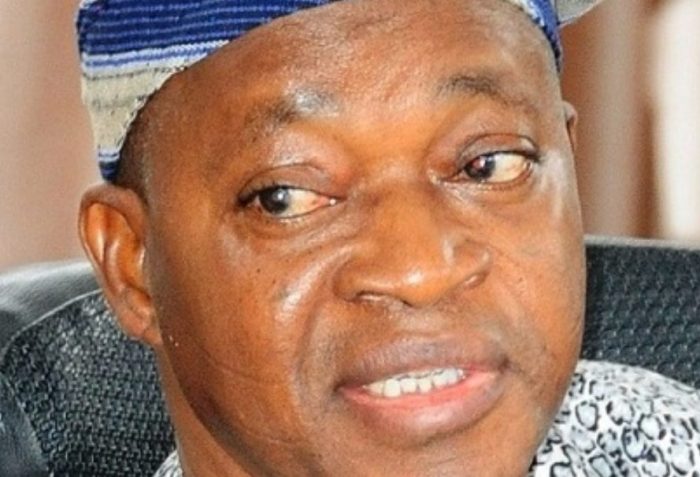 The Alliance of Collaborating Political Parties ACPP comprising political parties have pledged their support for the APC Candidate, Alhaji Gboyega Oyetola in tomorrow’s Osun Governorship Re-Run election.
Addressing a press conference on Wednesday, the Osun State Chairman of the ACPP, Mr Adesoji Masilo adduced Competence, Intelligence, Proven Track Record among other sterling qualities of Oyetola as the the reason behind their support for the APC flag bearer.
The Alliance which comprises all leading Political Parties in the state of Osun including the All Progressives Congress APC before it became the ruling party said it has resolved to go with Oyetola for the all round progress and development of the State of Osun.
The ACPP which commended the Independent National Electoral Commission INEC for a peaceful, free and fair and credible process urging it to replicate same in the seven units where re-run is holding tomorrow.
Masilo said “As stakeholders and lovers of development, we consider competence, good track record, education, private and public sectors experience, intelligence and good conduct as factors in choosing who to support. Considering all these, we are left with no choice than to declare our support for Gboyega Oyetola, the APC candidate. We fully endorse his candidature.”
“It is our firm opinion that he has the capacity to govern Osun and continue the development of the state. Oyetola is a God-fearing, capable, well educated, humane, honest and a man of integrity.”
“We urge the people of Osun who are voting in the seven polling units in Ife-North, Ife-South, Orolu and Osogbo Local Government Areas to massively vote for him tomorrow. We also urge the people to be orderly, peaceful and law abiding during and after the runoff election.”
“We condemn strongly the monetisation of election in Osun by the PDP as manifested in buying voters card, paying for votes and making voters to swear to satanic oaths in exchange for cash. This amounts to political corruption that is capable of subverting and undermining the foundation of democracy in Nigeria and Osun in particular.”
The ACPP said “We call on law enforcement agents to investigate this matter, apprehend the perpetrators and make them to face the law. This evil and cancerous development must be excised from our body politic.”
“We call on all the security agencies to be at alert and ensure that nobody, irrespective of political affiliation, is allowed to jeopardise the peaceful atmosphere of the state during and after the election.”
Members of the ACPN who attended the Press Conference are Prince Adesoji Masilo APA, Dr Gbenga Afeni ACD, Alh. Rafiu Anifowose GPN, Prince Adegoke Adefare NNPP,  Mrs Adebayo Rasidat PANDEL.
Others are Dr Kolawole Ojonla PDC, Mr Wole Adedoyin HDP, Mr Victor Olapade BNPP, Prince Femi Adeniran CAC, Raphael Faremi MMN, Pa Fasorepo G.O NCP, Chief Omojaro Dapo LPN, Prophet Mojeed Folorunso JMPP, Kunle Oyerinde MAJA.

Lopsided Appointments and The Presidential Fact!