Between Osun And Ekiti

Ekiti Governor, Kayode Fayemi, gave a lament, at the May 13 launch of Federal Government’s home-grown school feeding programme, in the state. “Your Excellency,” he told Vice President Yemi Osunbajo, who was in Ado Ekiti for the flag-off, “my government paid significant attention to social investment initiatives in my first term in office.” “We had…”
Yusuf
featured hero Op-Ed 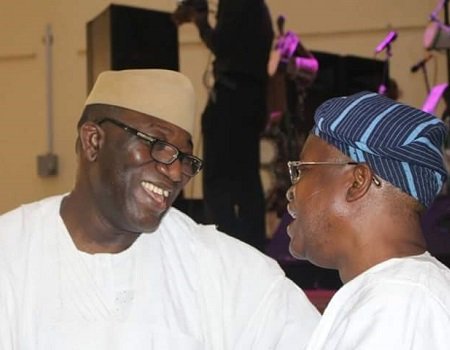 Ekiti Governor, Kayode Fayemi, gave a lament, at the May 13 launch of Federal Government’s home-grown school feeding programme, in the state.

“Your Excellency,” he told Vice President Yemi Osunbajo, who was in Ado Ekiti for the flag-off, “my government paid significant attention to social investment initiatives in my first term in office.”

But then came the Ayo Fayose debacle, and everything crumbled: “All these programmes were jettisoned in the four-year interregnum that we spent out of office,” Dr. Fayemi rued, “and this significantly affected the quality of life in our state. Not only did we lose our number 1 position in school enrolment we were in the country in 2014,” he added, “we now occupy the last position in enrolment in the South West as at 2018.”

All those well-thought out schemes, gone — at the roar of vacuous “stomach infrastructure”!

Ekiti’s fate could easily have been Osun’s – no thanks to reckless electoral choices; primed by selfish and irresponsible elite, with near-absolute contempt for the wellness of the collective.

That is why, with the courts now revalidating his mandate, Osun Governor, Gboyega Oyetola, should consolidate on the development agenda of the Aregbesola years; of which, the governor himself was part-implementer; as the former governor’s chief of staff, for the entire eight years.

This counsel is for good reasons.  By a report in the May 8 issue of Business Day, Osun’s 10.3% is the lowest unemployment rate in the country.  The report quoted the latest National Bureau of Statistics (NBS) figures.  That was no accident.  It was result of years of punishing thinking and gruelling work.

Osun’s figures best the South West’s 14% (the lowest in regional spread in the country); and certainly dwarf South-South’s 32% (the highest national unemployment figures, even with the Niger Delta awash with crude oil cash).

Still, in unemployment figures, 10.3% is not the lowest Osun has posted.  In 2017, the NBS unemployment and underemployment report, for the year’s first quarter, give Osun’s unemployment rate at 5.3%.

Back in 2010 – the Aregbesola governorship started in November that year – NBS gave Osun’s unemployment statistics as 17.2%.

Still, if the latest NBS figure is 10.3%; contrasted to 5.3% for the first quarter of 2017 – might the Osun push against unemployment then be faltering?  Perhaps; but that shows the new government cannot afford to take its eyes off the ball.

That reinforces the advice to the Oyetola government to further consolidate the social infrastructure segment, of the state’s development agenda, of the last eight years.

Even then, the blip and dip could be due to the electoral distraction of the past months.  The Osun elite, baiting and goading, forced a fearsome electoral impasse.  For a moment, the spectre of a dancing but empty governor loomed.  Other things being equal, that would have completely drained Osun, of its eight-year gains.

The Court of Appeal verdict, on the gubernatorial dispute, has somewhat reestablished some stability, pending the final stop at the Supreme Court.  It however shows how easily a state on the mend could take a knock; and return to old vegetative ways.

That is one danger that must be avoided at all cost; and it would have been nice if the Osun political elite, even with their fierce progressive-conservative divide, could forge a consensus to put the people first – above gilt-edge elite privileges; that however put the majority in ruins.  But alas!

People first — that would appear the simple but clear thinking behind Osun’s current social protection and social investment programmes, which have done much to lift the majority, driven by the following concepts: banish hunger, banish poverty, banish unemployment, promote healthy living, promote functional education and promote communal peace and progress.

It’s early days yet – even after eight years and counting – but these Osun social infrastructure policies could well pass as the most transformational, since the old Western Region of Chief Obafemi Awolowo.

During the Awo era, elite opposition came in form of nasty anti-taxation campaigns.  That made the Awolowo government to lose the first federal election, after the 1955 introduction of the epochal free primary education programme.

During the Aregbesola governorship, it came in form of vicious media propaganda, headlined by the salary crisis; and charges of phantom “Islamization”, all targeted at diverting attention from real development going on, in a state that had been prostrate for too long.   That drove the Oyetola election into a hideous stalemate.

But even with a lean purse, the Osun human development stats have been impressive: In 2013, with figures from the UNDP Human Development Index Report 2015, Osun’s human development index (HDI) was 0.4938, the 9th highest in Nigeria, despite not being among the Top 9 drawers from the federal purse.

Three years later in 2016, despite a crippling recession in the Nigerian economy, the Osun HDI had notched up to 0.5123, according to UNDP/NBS figures, released in October 2018.

So, whereas media headlines feasted on “hafsa” (half-salary) and allied banalities, suggesting some contrived economic meltdown, the glorious reverse was the case.

Osun was on its way to becoming a model in citizen equity, judged by how state resources ensure the greatest happiness of the greatest number, to use the immortal words of Jeremy Bentham.

That much was validated by Osun’s low misery index – the second out of Nigeria’s 36 states – for 2017.  According to figures compiled by Financial Derivatives Company Ltd, a Lagos research firm, the figure was 35.56%

That means specific programmes like O’Meals (schools feeding programme), OYES (the Osun Youth Empowerment Scheme), which apart from its 8, 000 cadet-volunteers, has also trained Osun graduates and non-graduates in specific skills; and O-REHAB, aimed at the mentally challenged and the destitute, have had a great impact on the majority.  Yet, these are programmes the political elite pooh-pooh.

Osun is clearly on the mend.  But it is early days.

That is why Governor Oyetola will do well to stick to the development charter of the past eight years.  With 12 cumulative years of those people-centric policies, Osun would surely be a state to beat.

What is more?  Its purse might not be so lean.

Culled from The Nation