•Court Reserves Judgement By Solomon Odeniyi The absence of Justice Peter Obiorah who read the lead judgement in favour of the Peoples Democratic Party (PDP) candidate, Senator Ademola Adeleke over the Osun governorship election became an issue before the panel hearing the appeal arising from the matter on Wednesday. Counsel to Governor Gboyega Oyetola, Wole…”
Yusuf
featured hero Osun 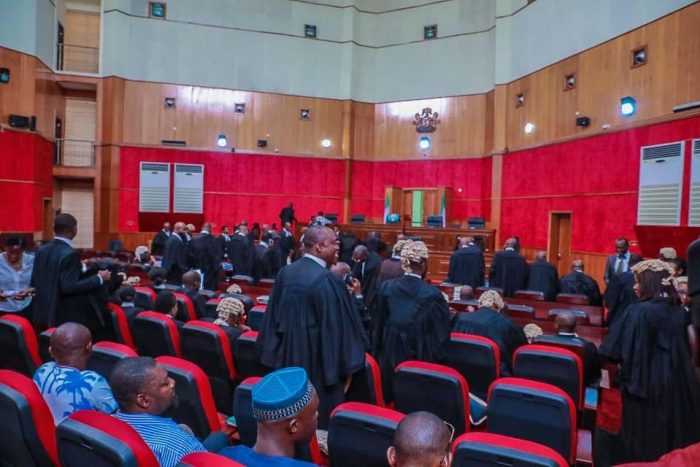 The absence of Justice Peter Obiorah who read the lead judgement in favour of the Peoples Democratic Party (PDP) candidate, Senator Ademola Adeleke over the Osun governorship election became an issue before the panel hearing the appeal arising from the matter on Wednesday.

Counsel to Governor Gboyega Oyetola, Wole Olanipekun (SAN) said the non-signing of the February 6, 2019 court record was sufficient evidence that he was absent from the proceedings.

Citing various Supreme Court judgments to back his argument, Olanipekun said Justice Obiorah’s presence or otherwise “goes to the root of fair hearing, saying, “Adjudication cannot be done by proxy”.

He added that contrary to the claim by the counsel for Adeleke and the PDP, there was no conflict in the tribunal’s record, as it was clear from the record that Justice Obiorah was absent from the proceedings of February 6, 2019 which formed the fulcrum of the lead judgement.

Oyetola, his party, the All Progressives Congress, and the Independent National Electoral Commission, then urged the appeal panel to overturn the March 22, 2019 majority judgment of the state Election Petitions Tribunal, which nullified the governor’s victory at the September 2018 poll.

Responding on the issue of the absence of Justice Obiorah on the February 6, 2019 proceedings of the tribunal, the lawyer representing both the PDP and Adeleke, Dr. Onyechi Ikpeazu (SAN), said there was a conflict in the record of the tribunal given the fact that the list of judges who sat that day contained Justice Obiorah’sname, but only that the judge did not sign the proceedings.

He noted that the appellants ought to have filed an affidavit alleging that the judge was absent from the proceedings and have the same affidavit served on the judge so that he could respond to the allegation.

He said for the Court of Appeal to come to a conclusion that the judge was absent; the judge must be heard first.

According to him, in the event that the judge was truly absent at the proceedings it could not amount to a nullification of the totality of the judgment read by the judge.

Olanipekun also maintained that the deduction of results said to have been affected by non-compliance and the declaration of Adeleke as the winner by the tribunal clearly violated the provision of Section 140(2) of the Electoral Act, which, according to him, only empowers an election tribunal to order a re-run when allegation of substantial non-compliance of the Electoral Act is proved.

Ikpeazu also defended the majority judgment’s deduction of the affected votes and the tribunal’s declaration of Adeleke the winner on the grounds that the section 140(2) of the Electoral Act cited by Olanipekun had been struck down by Justice Gabriel Kolawole (now of the Court of Appeal) who was then sitting as a judge of the Federal High Court in Abuja.

According to him, the petition filed before the tribunal was incompetent as it only sought an order declaring the petitioners winner based on the September 22, 2018 poll with the exclusion of the supplementary poll.

Olujinmi also faulted the cancellation of results of the September 22, 2018 election in 17 polling units on the grounds of non-compliance with the Electoral Act.

He added that the petitioners only complained of non-compliance in respect of the supplementary poll of September 27, 2018 but the tribunal, in its majority judgment, mis-directed the complaints against the election held in the 17 polling units on September 22, 2018.

Olujinmi also noted that the judgment held that the uncertified result sheets tendered by the petitioners were merely dumped on the tribunal without linking them to the case, yet the majority members went on to rely on the said dumped result sheets to deduct the results recorded by both the APC and the PDP in the 17 polling units.

INEC’s lawyer, Yusuf Ali (SAN), also urged the Court of Appeal to set aside the majority judgment on the grounds that in one breath, it held that the petitioners failed to prove their allegations of over-voting and non-accreditation of voters, yet in another breath, went on to nullify the election in 17 polling units on the basis of “non-compliance.”

Ali said the petitioners’ witnesses admitted during trial that the non-compliance in the form of failure of the electoral officers to fill some columns on result sheets accounting for accreditation of voters and ballot paper usage in the 17 polling units did not affect the votes recorded for the various parties in the polling units.

He added that by virtue of Section 138 of the Electoral Act, the non-filling of the columns on the result sheets did not amount to a substantial non-compliance with the Electoral Act and never envisaged to be part of possible grounds of appeal.

In his responses to Olanipekun, Olujinmi and Ali, Ikpeazu maintained that his clients, having “satisfied the constitutional threshold after the September 22, 2018 election, there was no reason why INEC should not have declared them the winner.”

He said his clients only waited for the supplementary election to be concluded since they could only file a petition after INEC must have announced the winner of the poll, contending that his clients’ petition was therefore not rendered incompetent for anchoring his prayers on only the September 22, 2018 election.

Ikpeazu also insisted that the non-filling of some columns of the result sheets went to the root of the transparency of the entire electoral process.

Mr Kehinde Ogunwumiju (SAN), argued Adeleke and the PDP’s cross-appeal, which was also opposed by the individual lawyers representing Oyetola, the APC and INEC.

The five-man panel led by Justice Jummai Sankey, heard all the three appeals and a cross-appeal filed in relation to the disputed election and reserved its judgments.

Other members of the appeal panel which heard all the four appeals on Wednesday were Justices Abubakar Yahaya, George Mbaba, Isaiah Akeju and Bitrus Sanga.

INEC had declared Oyetola and the APC the winner of the Osun governorship election on the basis of the cumulative results of the September 22, 2018 main election and the September 27, 2018 supplementary poll.

Dissatisfied with the result declared by INEC, the PDP and Adeleke had filed their petition before the three-man Osun Election Petitions Tribunal, contending that they were the true winner of the election as they had already won after the September 22, 2018 poll and that there was no need for the September 27, 2018 supplementary election.

The tribunal, in its March 22, 2019 split judgment of two-to-one, nullified Oyetola’s victory and declared Adeleke and the PDP the winner of the election.

The tribunal’s chairman, Justice Ibrahim Sirajo, in his minority judgment, dissented from the majority judgment credited to Justices Peter Obiorah and Adegboye Gbolagunte.

The trio of Oyetola, the APC and INEC filed separate appeals challenging the majority judgment.

Although, the majority judgment of the tribunal was in their favour, both Adeleke and the PDP also filed a cross-appeal to challenge the aspect of the verdict which held that they failed to prove allegation of over-voting raised in their petition.

COVID-19: Full Compliance In Osun On Day 1 Of Total Lockdown