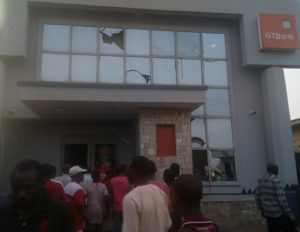 Adepoju in an interview with our correspondent said the robbers took the local security personnel by surprise. He stated that there was little they could do when they learnt of the robbery because of the sophisticated weapons the robbers came with.

He said, “After the robbery, we counted about 50 dead policemen and civilians. They shattered the bodies with bullets. They targeted mainly the heads of their victims.”

He stated that the bandits stormed the area and started shooting indiscriminately with heavy guns, adding that they ran to inform the police as they did not have any ammunition to defend themselves or to confront the robbers.

Adepoju stated that before they could reach the police station, the bandits had already killed some victims, including policemen.

He also appealed to the federal and state governments to provide them with weapons and to motivate them.

The vigilance group boss said it would be impossible for the robbers to operate and go unchallenged if the vigilantes were armed.

He further appealed to wealthy indigenes of Offa to help them, saying they were only rendering voluntary work to the community.

Adepoju said, “This is new to us. Bandits came to Offa some years ago. After that, all security operatives, including vigilantes, started to monitor the town from morning till night. They came twice at a time but it was not possible for them to operate.

A retired police inspector, Mr. James Oyeyemi, who lost her daughter, Grace Makinde, an inspector, to the robbery, said the bandits were able to operate unhindered because of the sophisticated weapons they used.

He stated that it was important to adequately equip and motivate the police, noting that with adequate equipment and manpower, the police would combat security challenges.

“In the past, the IG used to equip the police with armoured car and bulletproof vests. So where are they now? They do not maintain the vehicles for operations, they do not buy arms and they do not pay them well? How do they want the police to perform? They cannot perform.’’

The 72-year-old, who said he retired in 1998 after 35 years of service, accused the police of not officially informing families of the slain police officers of what happened to their relations.

He stated that when he got information about the robbery, he sent someone to verify the situation.

“It is not good to talk about the security situation in Nigeria because it is too bad. If there was enough security, how would armed robbers come to police station and attack policemen? Also, “I learnt that some deceased policemen were dumped in a mortuary in Ilorin and nobody cared for them. Families of the deceased were not informed on time about the incident. It is wrong. I am a retired police officer.

“In the past, they would have contacted families of the deceased police officers who would arrange how to bury their dead. They would then talk of how to get their entitlements. But nowadays, it is not the same,” he added.

Police Reveal Cause Of Zamfara Killings