It has been gathered that seven suspects had been arrested in connection with the robbery operations. The CP, during a media briefing in Ilorin, the state capital, said the number of injured victims had yet to be ascertained as they were receiving treatment at different hospitals. He stated that the Inspector-General of Police, Mr. Ibrahim…”
Editor
News 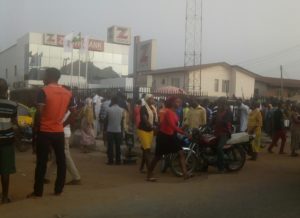 It has been gathered that seven suspects had been arrested in connection with the robbery operations.

The CP, during a media briefing in Ilorin, the state capital, said the number of injured victims had yet to be ascertained as they were receiving treatment at different hospitals.

He stated that the Inspector-General of Police, Mr. Ibrahim Idris, had ordered a full-scale investigation into the incident.

Ado said, “Seven suspects were arrested; one at Igosun Road and six others at different locations in Offa. They are helping us in our investigation.

“Seven vehicles abandoned by the robbers were recovered. Some rifles were carted away by the robbers. The command wishes to express its heartfelt condolences to the families and friends of the victims while also wishing the injured quick recovery.”

Also, the state Governor, Mr. Abdulfatah Ahmed, has offered N5m to anyone with useful information that could lead to the arrest of the robbers.

Ahmed, in a statement by his spokesperson, Dr. Muyideen Akorede, called on anyone with useful information on the incident to contact the state police command on the following mobiles — 08037391280 and 08032365122.

He said, “While we mourn our dead with a heart full of sadness, and care for the injured by paying all their medical bills, we will do everything in our power to bring the attackers to justice and ensure that never again does any community or people in our state experience such tragedy.”

The governor said there was an urgent need to ensure that justice was done on the matter, assuring informants of anonymity, confidentiality and safety.

Ahmed said the police and other security agencies in the country had begun a manhunt for the perpetrators of the attack on Offa community.

He pledged to spare no effort in supporting the law enforcement agencies to apprehend and prosecute the perpetrators.

Similarly, Senate President, Dr. Bukola Saraki, said the National Assembly was committed to initiating template that would address insecurity, insufficient funding and inadequate personnel, including structure of the police.

Speaking during a condolence visit to the Olofa of Offa, Oba Muftau Esuwoye, on the incident, Saraki said it was not advisable inviting the military for assistance.

He said, “There is no society that delegates the responsibilities of the police to the military. Because it also has its own fallbacks; the number of the military is very thin. They are in most of the states of the federation. This makes it difficult for them to protect the territorial integrity of the country.

“This calls for the general improvement on the security infrastructure in the country.’’

The Senate President stated that Nigeria’s security challenges were as a result of the country’s inadequate response to security.

He said, “All the issue had to do with how we will improve on our security infrastructure. It is clear that we are not responding adequately to this. That is why we organised a security summit sometime ago to address the issue and to work closely with the executive and see how we can find solutions to the security problems in the country.

“We, in the legislative arm, are ready to come up with the real design to improve on the security challenges, whether it is the human resources, equipment, funding or legislation. There is also the issue of the actual structure of the police.

“This issue requires a very radical and serious-minded approach. Unless we address this, we will continue to have this kind of scenario where a bunch of criminals will hold a town for two hours and carry out this mayhem. There is no society that will really allow this kind of thing to happen.”

Saraki added that in a place like Offa, known for its vibrancy in commerce, the issue of insecurity must be tackled so people could continue to go about their daily activities.

“The police must see this as an institutional issue. It is not personal. On our part as legislators, we are ready to do anything that will empower them,” he said.

Also, the Olofa called for the establishment of state police.

The monarch said, “It will be better for the Federal Government to establish state police. With that, they will be closer to the people and the state government. This is the fourth time that we will experience this kind of robbery attacks in the last 10 years. One of the major problems of the Force is inadequate manpower.

“We discovered that in the Offa Local Government Area, the number of policemen is not up to 50. Anytime there is a robbery, there will be no reinforcement. What we need is manpower. The state government can afford to buy armoured personnel carriers and it can build more police stations. But if the manpower is not there, it is not enough.

“What the Federal Government needs to do is to employ as many graduates looking for jobs into the Force, Army, Air Force and the Navy. There are lots of unemployed graduates ready to join these military and para-military forces. There is no security at all in the country.’’

The monarch, who noted that the community was involved in local policing, said robbers always caught the town unawares.

He said, “There is a risk attached to the use of local hunters. By the time we involve them in security because of a day like we just witnessed, the police will arrest them and say they are carrying dane guns.”

Nigerians Charged On Fear Of God, Service To Humanity