NWFL Nationwide side, Naija Ratels FC have acquired the slot of Invicinble Angels in the NWFL Championship after a mutual agreement was reached by the two clubs on Friday evening. The management of the two Benue State Football sides, confirmed the development to journalists on Friday evening and noted that the deal was a…”
Yusuf
Sports 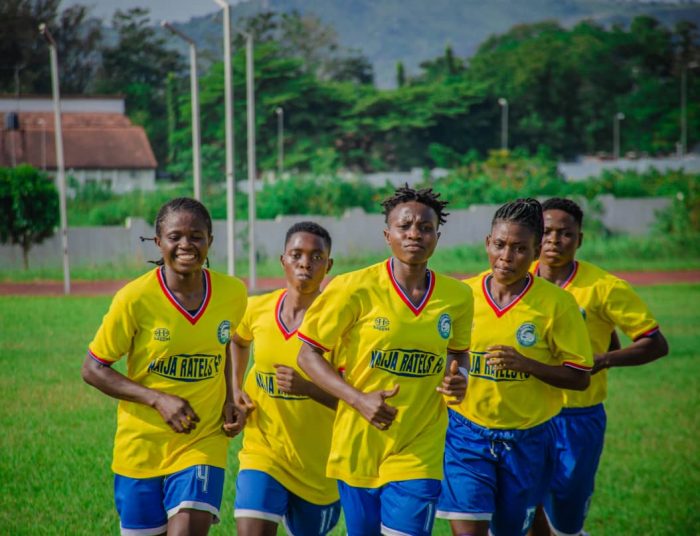 NWFL Nationwide side, Naija Ratels FC have acquired the slot of Invicinble Angels in the NWFL Championship after a mutual agreement was reached by the two clubs on Friday evening.

The management of the two Benue State Football sides, confirmed the development to journalists on Friday evening and noted that the deal was a neccesary step to improve the standard of women football in Benue.

Invincible Angels in a statement during the weekend said the agreement was sealed after a thorough discussion between both parties with both Club Chairmen leading the negotiation. The Chairman of the Gboko based side, Mr. Chur Jr MichaelRandy noted that the club is aware of the challenges ahead in terms of the new club licensing/documentation policy introduced by the Sports Ministry and the NWFL under the leadership of Aisha Falode.

“We understand we might not be able to cope with the financial terms, club licensing, documentation and other requirements under the new policy of the NWFL.

“This is the reason we thought and agreed mutually that we should give the baton to our sister club, Naija Ratels to finish the race.

“We had challenges last year in the Premier League and thought we were going to get help from the Benue State Government, but we never did. Unfortunately things have gotten worse financially with the COVID-19 pandemic ravaging the world, the best decision was to hand the slot over to a sister club who is capable.

In his remarks the President of Naija Ratels Football Club, Barrister Paul Edeh thanked the management of Invicinble Angels for the opportunity and also made it known that proper documentation as regards the change of status has been done officially by the NWFL. “When Invincible Angels FC approached us to take their NWFL Championship slot, we received the news with great joy and did not hesitate to accept the offer after mutually agreeing on the terms of the offer. It is worthy of mention that the paper work has been done and the NWFL leadership under the Chairperson of Aisha Falode has since done the change of name and endorsed Naija Ratels FC as a team in the NWFL Championship.

“I want to use this opportunity to thank the Chairman of Invincible Angels FC Mr Chur Jr MichaelRandy for giving us the right to take their slot. I also want to thank the Chairperson of the NWFL Ms Aisha Falode for making the process of our registration seamless.

“I have no doubt that the 2021 season will indeed be a year to be reckoned with as we have continued to prepare assiduously to be victorious in the Championship,” he concluded.

UCL Draw: Chelsea Take On Juve While PSG And Man City Square Off