The friendly match played by the Super Eagles and the Teranger lions yesterday at the Hive stadium of Barnet Football Club in North London, the match settled as the 1-1 draw. This was a brilliant encounter that both team gave their best to the make the best out of it. The Super Eagles coach said the…”
Yusuf
Sports 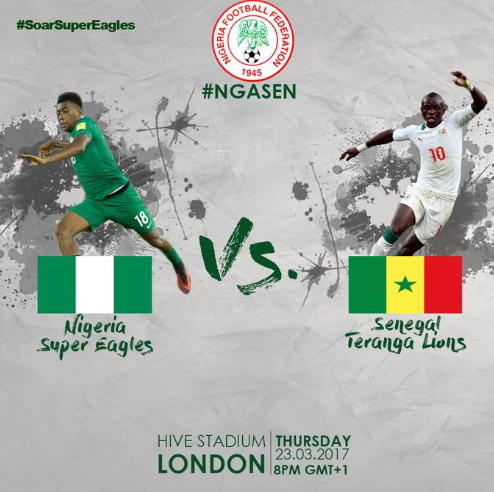 The friendly match played by the Super Eagles and the Teranger lions yesterday at the Hive stadium of Barnet Football Club in North London, the match settled as the 1-1 draw. This was a brilliant encounter that both team gave their best to the make the best out of it.

The Super Eagles coach said the opponent for the friendly was to show how strong there are and how physical they can get with themselves and Teranger Lions and how they can use the opportunity to test themselves.

This was some test. Senegal settled quicker and better in the opening stages of the first half as would be expected of a team who reached the quarter finals of AFCON just 6 weeks ago. They pressed Nigeria and in those opening moments Kenneth Omeruo was caught out a few times. A cross by Moussaka Sow out on the left was glanced against a post by Cheick Ndoye. A few minutes later Mame Biram Diouf of Stoke City clattered into the back of skipper Ogenyi Onazi with his knee. It was a dangerous and needless assault. Onazi lay sprawled on the turf for while before being carried off on a stretcher.

The introduction of John Ogu for the stricken Onazi changed the game for Nigeria as the physically imposing Ogu alongside the ever improving Wilfred Ndidi started to get to grips with the physicality of Senegal and Nigeria started to play. Also, Omeruo got a grip on this right back position so the team improved. With the improvement came chances.

Kelechi Iheanacho wasted two of the best. First, he was released by an astute pass from Ndidi with only the keeper to beat he dragged his shot wide. And just before half time, quick interchange between Moses Simon and Alex Iwobi had the Arsenal man set up Iheanacho this time inside the 6 yard box he still shot wide. To be fair, Cheick Kouyate made a desperate attempt of a block which probably put him off. Still, a player of his quality should have scored.

Senegal started the second half like a house on fire bit Nigeria were still dangerous on the counter attack. Ten minutes into the second half Diouf broke down the right on a counter. The impressive Ndidi blocked his cross for a corner. From the resultant corner the Nigerians failed to clear properly and during the ping ball that ensued the ball fell to Sow inside the box. He coolly controlled and lashed home. A deserved lead and they continued with the territorial advantage thereafter. For the Nigerian defence William Troost-Ekong was immense. He won everything in the air and seemed to relish the physical challenge.

The introductions of Isaacs Success and Oghene Etebo for Simon and Iwobi got Nigeria back in the game. The Watford forward especially was a handful. One of his jinking runs ended with him setting up Etebo for left footed effort from the edge of the box that the keeper tipped round the post.

Finally the breakthrough came for the Eagles when Senegal lost possession in the middle of the pitch and Etebo sprung Iheanacho quickly. Keeper came out and the striker went over. Penalty. He got up and confidently sent the keeper the wrong way to get his side level.

Both sides pressed hard for the winner but the defences held steady until in injury time. Here another sub Kayode Olarenwaju released Iheanacho edge of the area. The Man City striker chose to shoot when Success and Ogu were better placed, screwing his effort well wide. Final score 1-1. Fair result.