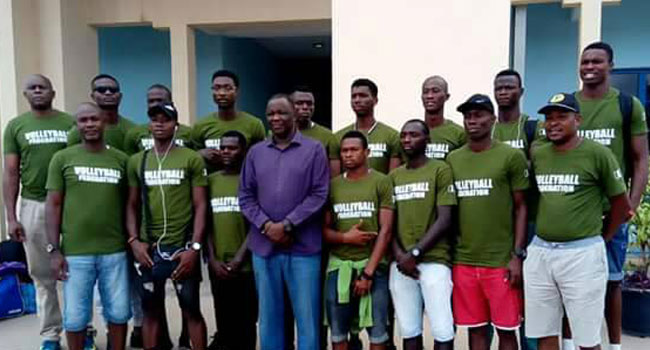 The Nigeria Volleyball Federation (NVBF) have announced that the proposed Volleyball Premier League will take place from November 1-10, 2018 in Kaduna.

The President of the Federation, Musa Nimrod, stated that the league was delayed due to the hosting of the U21 Africa Men’s Nation’s Cup in Abuja.

“The Volleyball Federation is yet to get a sponsor for the league. The Premier League competition had to be moved out from Abuja to Kaduna by the League Management Committee because of cost reduction,” he said.

According to him, the league cannot start this month due to the preliminaries of team games ahead of the 2018 National Sports Festival in Abuja later next month.

“We have put plans on the way and all things being equal, the league should be back next month. We never planned to postpone the league but Nigeria had to host the rest of Africa in the men’s U21 Championship which was commended by the Confederation of Africa Volleyball, the Zonal eliminations of the National Sports Festival in October amongst others,” he stated.

He said, “The Umaru Musa Yar’adua Indoor Sports Hall will witness within two weeks of uninterrupted volleyball for both men and women.

According to the president, the league was moved to Kaduna by the League Management Committee due to lack of sponsor and to reduce the cost of running the league.

The NVBF boss stressed that the league will impact positively on the development of the sport at the grassroots level across the country.

He added, “Getting the league right would mean the total transformation of Nigerian volleyball from the grassroots to the national level. The league will drive all volleyball developments in this country. If we fix league, it will change many things because it is an economy on its own.

“Our target is to bring over 2, 000 Nigerians to the stadium in every day. Nigerians are gradually beginning to love the game volleyball again after our successful performance at the Africa Youth Games, the U20 girls and the recently concluded U21 Men’s Africa Championships.”