Unai Emery believes Arsenal’s blistering form has restored the bond between the team and their supporters after the Gunners crushed Fulham 5-1 to record the club’s longest winning streak for 11 years. Emery’s side turned on the style on the banks of the River Thames, romping to their biggest win of the season as the resurgent…”
Yusuf
Sports 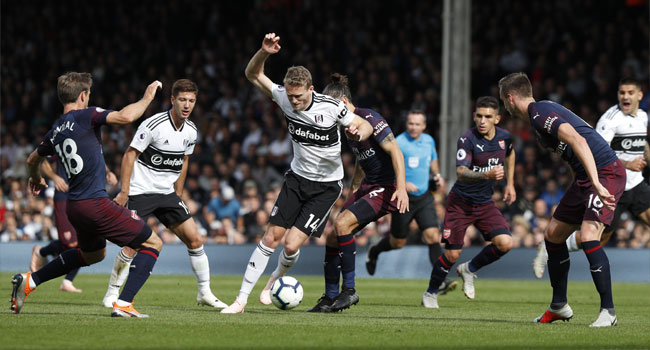 Unai Emery believes Arsenal’s blistering form has restored the bond between the team and their supporters after the Gunners crushed Fulham 5-1 to record the club’s longest winning streak for 11 years.

Emery’s side turned on the style on the banks of the River Thames, romping to their biggest win of the season as the resurgent Gunners moved into the Premier League’s top four.

Alexandre Lacazette sparked Arsenal’s power surge at Craven Cottage, with his superb second-half strike restoring their lead after Andre Schurrle had cancelled out his opener.

Pierre-Emerick Aubameyang netted twice in the closing stages as Arsenal won six consecutive league matches within a single campaign for the first time since 2016.

It was a significant statement of intent from a team widely written off ahead of Emery’s first season in charge.

“Our performance over the 90 minutes was very important. We worked very hard in the second half to get this result with our momentum on the pitch,” Emery said.

“I believe in us, we believe in our process but also we must keep taking confidence. I think we are in the first part of the war.

“It is very difficult but we must prepare, continue improving and show big commitment.”

Emery was expected to need a long period to revive Arsenal after the depressing final years of the Wenger era.

But the former Paris Saint-Germain boss has helped Arsenal quickly rediscover their verve and struggling Fulham had no answer to their enterprising display.

No wonder jubilant Gunners crammed into one corner of Craven Cottage celebrated the goal with chants of “We’ve got our Arsenal back”.

That unity between fans and players was badly missing as supporters staged protests against Wenger last season.

“You need to feel together with the supporters and the players. This spirit and mentality is very important for us,” Emery said.

“To show our quality and work, then together we can be happy like today. We need them to support us. The players feel that.

“We are happy but also calm because we know each match is difficult. We are going to continue working.”

While Arsenal are improved, they have been aided by a soft fixture list in recent weeks and even Emery demurred when asked if his team are now title contenders.

“We lost the first two matches against Manchester City and Chelsea. We were calm then and we need to be the same way in our mentality when we are winning,” he said.

“I don’t want to look back. Every match is different. We have a better position in the table for our objections, but we have to be calm.”

Fulham are off to their worst start to a top-flight season with one win in eight games following last season’s promotion.

They waved the white flag as Arsenal ran riot, leaving Fulham boss Slavisa Jokanovic frustrated with their effort levels in the second half.

“We need to be more solid and more competitive if you want to be honest. We opened all the doors and they finished easily,” Jokanovic said.

“We showed so many weaknesses for this Premier League level.

“Arsenal showed their quality and pace, but we surrendered in the last 10 minutes.”