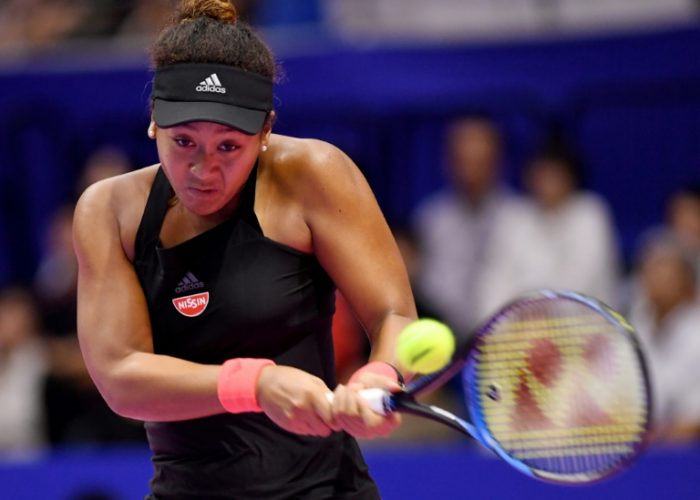 Former world number one Pliskova beat Croatia’s Donna Vekic 6-2, 4-6, 6-3 but took well over two hours to get the job done.

Osaka, however, made quick work of a dangerous opponent who had knocked out top seed and defending champion Caroline Wozniacki, breaking twice in a one-sided first set which she took with a blistering forehand down the line.

The 20-year-old, who has climbed to seventh in the world rankings since her stunning victory over Serena Williams in New York, piled on the pressure in the second.

A brutal Osaka forehand forced a break in the fifth game, before a vicious backhand return forced Giorgi to whiff a shot beyond the baseline on match point.

“I was pretty nervous because I really wanted to get to the final,” said 2016 runner-up Osaka, who fired down nine aces in a dominant display.

“If she’s on, it would’ve been almost impossible to beat her,” added Osaka. “The only thing that I could do is play as well as I can and hope for the best.”

Fourth seed Pliskova took just 12 minutes to secure a 4-0 lead before closing out the first set with one of her 11 aces.

Vekic hit back to take the second as Pliskova’s serve imploded, the world number eight blotting her copybook with seven double-faults, many of them coming on key points.

But Pliskova snaffled an early break in the decider and hung on to reach her first Tokyo final, a forehand rocket ending her opponent’s spirited resistance.

“That was tough and I was lucky to win,” admitted Pliskova, who is chasing an 11th career title.

“I’ve never been in a final in Japan and the last one is always the toughest. But at least you know you can put everything into it. You don’t get to play a final every week so I want to enjoy it.

“Naomi is playing with confidence,” added Pliskova. “I have my weapons, she also has some. But I believe I have a chance.”

Osaka will be aiming to scoop her third WTA Tour singles crown after her breakthrough at Indian Wells in March and remarkable US Open victory.

Arsenal Fed-Up Of Ozil’s Slow Down

Heat Between CHAN Eagles And Palancas Negras In Morocco