A fire outbreak at a section of Binukonu Ultra Modern Market, Ojota Lagos in the early hours of Friday has destroyed properties worth millions of Naira. This is said to be the third fire incident at the market in three years. Previous incidents occurred in 2015 and November 2017. Friday’s fire, which was believed to…”
Editor
News 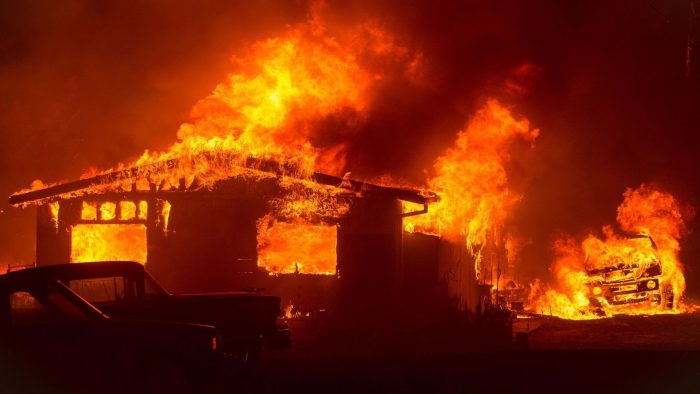 A fire outbreak at a section of Binukonu Ultra Modern Market, Ojota Lagos in the early hours of Friday has destroyed properties worth millions of Naira.

This is said to be the third fire incident at the market in three years. Previous incidents occurred in 2015 and November 2017.

Friday’s fire, which was believed to have been caused by an electrical fault, started at 1.30am and razed over fifty stalls in the market.

At 4.10am when the NAN correspondent arrived at the scene, firefighters who came with two trucks from the Lagos State Emergency Management Agency (LASEMA) were seen putting out the blaze, which was still raging.

Panicky traders tried to salvage their goods in their shops from the approaching fire.

Alhaja Rehanat Salami, the female Head of the market (Iya-Oloja) said that the fire was caused by an electrical fault.

She said: “I didn’t look at the time when I received a phone call that the market was burning when I hurriedly started coming here.

“When the fire occurred on the two previous occasions, we did everything the government instructed us to do.

“When the fire occurred the first time, the government helped us to reconstruct the affected stalls for free.

“I heard that this fire was caused by an electrical spark, I had warned everyone to always turn off their electricity connections when there is a power outage.

“We make sure we put off all the lights when we close for the day at the market.”

The secretary of the market, Mr Gbenga Fayemi revealed previous efforts the management of the market had made to prevent a reccurrence of a fire outbreak.

“This fire that occurred just now is the third time that it is occurring,the first was three years ago and the last one occurred last year.

“The traders had not fully recovered from the previous incidents when this one occurred despite all our efforts to prevent a reoccurrence.

“When the first incident occurred Hon. Rotimi Agunsoye of the House of Representatives, gave us some fire fighting equipment.

“When the second incident occurred, we tried using the equipment but it didn’t quench the fire.

“I also installed the equipment in all these shops that got burnt because I was told that the equipment will burst and stop the fire when a fire begins but I was surprised that it did not work today,” he said.

Fayemi said the fire services did not arrive at the scene till about 2.30am which was an hour after the first call was made to alert them about the blaze.

“When they came, their water was not enough I had to tell them to send more water tankers here because the fire was much more than we expected.

“Two fire trucks are here from LASEMA, the fire fighters had to go to Ogba to get more water, I wonder why the water channels created by Lagos State Government don’t work,” he said.

Mrs Olabisi Salami, a trader who sells frozen meat and fish in the market tearfully lamented to NAN about her financial losses.

She said “I was called at 2 a.m. that the market was on fire, when I got here I realised everywhere has been totally burnt.

“I have no insurance. When the first incident occurred, the local government rebuilt the affected stalls.

“I had just used a loan to purchase a lot of fresh frozen produce on Tuesday in preparation for the Easter holiday and now this happened on Friday.

“I have lost five deep freezers and goods worth N1.6million to this fire, Nigerians should help me, I don’t know what to do, this is the second time this is happening to me,”Salami lamented.

Another trader, Mrs Toyin Shodara, also talked about her losses in the fire incident.

“I sell drinks and snacks, I got to know about the fire incident about 3a.m this morning. I have a month old baby, so I could not come immediately I heard the news. It was my husband that came.

“The fire wasn’t a lot on my own side of the market, I was able to salvage a few things, though it affected my freezer, plastic drinks and my crates of minerals.

“I have no insurance, I don’t know how I will recover from this. Everything is in the hands of God,” she said.

Other traders who were badly affected by the fire declined interviews with NAN because they were too distraught to speak.

Mr Kehinde Adebayo, the Public Relations Officer (PRO) of LASEMA, in a phone interview told NAN that he could not comment on the alleged one hour lateness of the fire services and insufficient water in the fire trucks.

“I cannot comment on that. Only the Managing Director (MD) can comment on that. What I can do is to issue an official press statement. All I can say before the statement is issued is that there was sufficient water for the fire trucks,” he said.

Mr Afolabi Sofola, the Chairman of Kosofe Local Government Area in a phone interview with NAN talked about efforts to stop the fire and the Local Government’s recovery plans for the traders affected by the fire at the Binukonu Market.

Afolabi said:”I was woken up at around 3.30am and I was told that the market was on fire and immediately I told the fire brigade to go there.

“I wanted to leave home at that time to go there but we are very much aware that the Inspector General of Police have recalled all our security details and we have to be careful these days about security.

“I’m presently on my way there, but the information available at my disposal is that the incessant power outage could have caused the fire outbreak, we will get a report before the afternoon.

“In my first tenure as Chairman, I had urged the traders to do insurance and none of them was particularly keen.

“We are sensitising them on the importance of insurance, because it is important in all walks of life, even the staff of my local government are currently in the process of being insured.

“We will have a meeting and put heads together, see the extent of the damage and how we can rally around them to assist them and collaborate with other agencies to see how we can be of assistance. This is very unfortunate.

“We have to sensitise our people on the fact that we should not leave our appliances on. Switching them off will prevent a fire outbreak,” the local government Chairman said.