Former England captain Wayne Rooney was Monday banned from driving for two years and ordered to perform 100 hours of unpaid work after pleading guilty to drink driving. The Everton forward was stopped by police when driving a woman’s black Volkswagen Beetle at 2:00 am (0100 GMT) on September 1, while his pregnant wife and…”
Yusuf
Sports 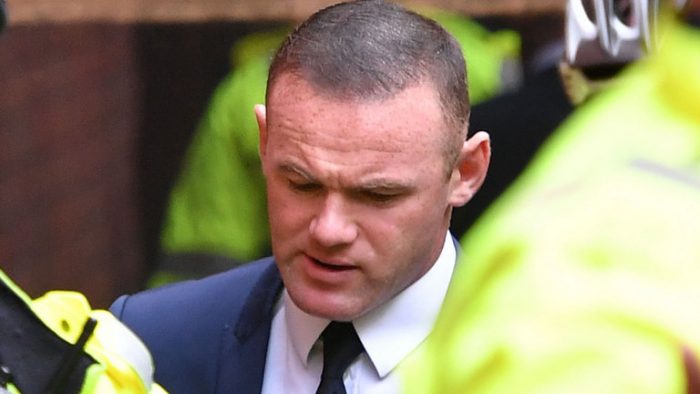 The Everton forward was stopped by police when driving a woman’s black Volkswagen Beetle at 2:00 am (0100 GMT) on September 1, while his pregnant wife and their three sons were on holiday.

Rooney apologised for his “unforgivable lack of judgement” after his guilty plea at Stockport Magistrates’ Court in the northwest of England.

“Following today’s court hearing I want publicly to apologise for my unforgivable lack of judgement in driving while over the legal limit. It was completely wrong,” he said in a statement.

“I have already said sorry to my family, my manager and chairman and everyone at Everton FC. Now I want to apologise to all the fans and everyone else who has followed and supported me throughout my career.

“Of course I accept the sentence of the court and hope that I can make some amends through my community service.”

Earlier, Rooney, 31, made no comment as he was confronted by a media scrum outside the court.

Wearing a blue suit with his hands in his pockets, he walked into the court building accompanied by a small entourage.

He has been married to his high-school sweetheart Coleen since 2008 and they are expecting their fourth child.

Everton manager Ronald Koeman said earlier this month the matter would be dealt with “internally”.

Rooney was given a warm welcome at Old Trafford on his return to former club Manchester United on Sunday but it ended in disappointment with a 4-0 defeat at Everton.

Rooney made a successful start to his second Everton spell following his return to the club from United, scoring on his first two Premier League appearances.

His form moved England manager Gareth Southgate to offer him an international recall, but he decided to call time on his England career.

Everton is currently 18th in the Premier League after three successive defeats.

Abubakar Bala Not Satisfied Despite His Side’s Victory