Paris Saint-Germain season has been going well, till on Sunda, where there was a 2-0 win over Lyon also laid bare certain tensions in their all-star front line. PSG was leading 1-0 at the Parc des Princes when they won a penalty with 10 minutes remaining for a foul on Kylian Mbappe, making his home…”
Yusuf
Sports 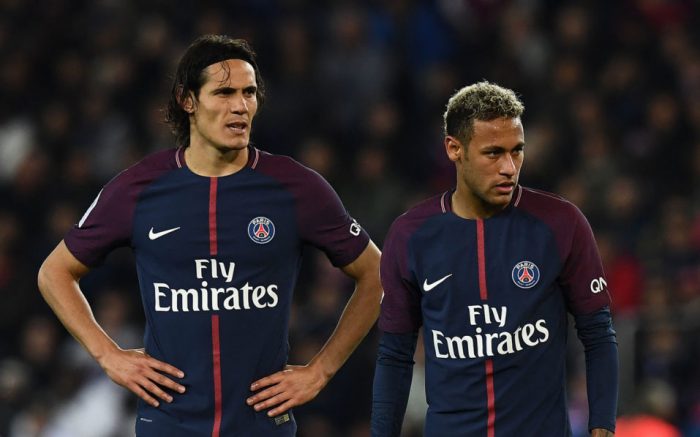 Paris Saint-Germain season has been going well, till on Sunda, where there was a 2-0 win over Lyon also laid bare certain tensions in their all-star front line.

PSG was leading 1-0 at the Parc des Princes when they won a penalty with 10 minutes remaining for a foul on Kylian Mbappe, making his home debut.

Having already scored three times from the spot this season, Edinson Cavani assumed the responsibility would once again be his.

Neymar tried to get the ball from the Uruguayan but it was Cavani who eventually took it. And his effort was brilliantly saved, Anthony Lopes tipping the ball onto the bar.

“The penalties are taken by a couple of players, one is Cavani and the other is Neymar. There needs to be a gentleman’s agreement on the pitch to decide who takes the penalties,” coach Unai Emery admitted later.

“We will sort things out internally for the next time because I think they are both capable of taking them, and I want the two of them to mix up who takes them.”

Those comments and the fact Cavani was unsuccessful from the spot suggests Neymar will get his chance in future.

The Brazilian had previously tried and failed to grab the ball from Cavani when a penalty was awarded in the 3-0 win over Saint-Etienne last month. Cavani scored that time.

Earlier in Sunday’s game, the duo disagreed over who should take a free-kick with the match still goalless. Dani Alves intervened to give his compatriot the ball on that occasion, and Neymar’s strike was saved.

“They are two great players. They want to score goals. There are no problems between them, everything is fine,” insisted PSG defender Presnel Kimpembe.

Most coaches would envy the embarrassment of riches at Emery’s disposal.

The ‘MCN’ front line of Mbappe, Cavani and Neymar has cost the capital club 466 million euros ($557 million, £411 million) but now the coach has to somehow keep them all happy.

Cavani scored a remarkable 49 goals in all competitions last season and already has nine this season — it would have been 10 had the opener against Lyon not been credited as a Marcelo own goal.

But Cavani, who previously lived in the shadow of Zlatan Ibrahimovic, has seen PSG commit the two biggest transfer fees in history to sign Neymar and Mbappe.

And 222 million-euro man Neymar has come to Paris to be the main man after spending four years in Lionel Messi’s shadow at Barcelona.

“This victory has exposed tensions between Neymar and Cavani,” said sports daily L’Equipe on its front page on Monday.

The ‘MCN’ scored eight goals between them in their first two matches together against Metz (5-1) and Celtic (5-0), but Sunday was less encouraging.

Cavani saw very little of the ball, while Neymar and Mbappe were relatively subdued, even if they combined to force PSG’s second on the night, a Jeremy Morel own goal.

Julian Draxler, a 40 million-euro signing from Wolfsburg in January, was also shoehorned into the team on Sunday but overloading the side with attacking stars is to the detriment of the overall balance.

PSG have not slipped up yet, but Sunday’s game showed that Emery has plenty on his plate.

My Believe Is That No One Is Better Than Me- Ronaldo