Governments at all levels in Nigeria have been charged to listen to the yearnings of Nigerian youths and review the country’s security architecture to engender peace in the land. A Non-Governmental Organisation, the Forum for National Builders and Social Development, gave the charge in a statement yesterday, saying that the trend of violence that erupted…”
Yusuf
featured News 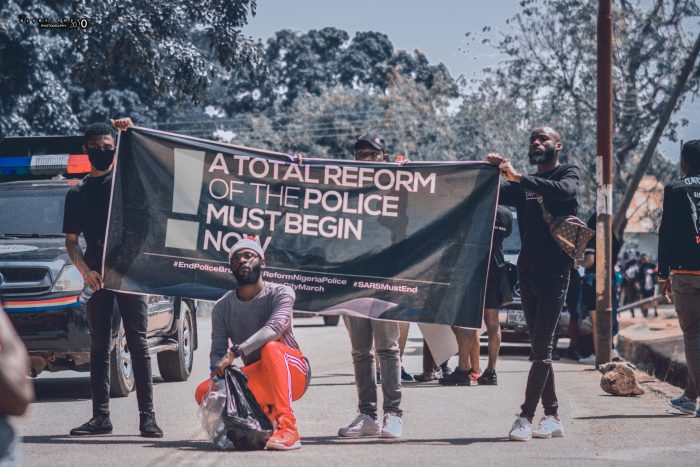 Governments at all levels in Nigeria have been charged to listen to the yearnings of Nigerian youths and review the country’s security architecture to engender peace in the land.

A Non-Governmental Organisation, the Forum for National Builders and Social Development, gave the charge in a statement yesterday, saying that the trend of violence that erupted after the peaceful demonstration of the youths against police brutality showed that government needed to do more for the Nigerian people.

Signed by Mr Ayo Odeyemi, the Convener of the group and two other members, Alhaji Lateef Bakare and Chief Abiola Oloke, the forum commended the peaceful protesters for making history to register their displeasure with the wave of insecurity and extra-judicial killings in the nation, a move which has shown that they are ready to ensure the greatness of Nigeria.

It also condemned the violence that broke out as an aftermath to the #ENDSARS protests, stressing that government should be cautious in the deployment of the military to restore peace to troubled spots.

The statement said: “We condemn in its entirety, the killing of policemen, burning of police stations and other government properties, attacks on Nigeria Correctional Centres in Edo, Ondo and Lagos States, looting of both private and public properties in the name of protests by these hoodlums.

“The unison which the youths spoke and their persistence and focus on their demands, has no doubt rekindled the hope of many Nigerians particularly those of the older generation that the youths are ready to take their rightful place in shaping the future of the country for greatness.

“The continuous failure of governance; which has led to the exclusion of a large proportion of the citizenry from access to basic services such as quality education, healthcare, stable electricity, portable water, etc; is unsustainable and must be redressed without further delay by instituting strong changes within our political and governance systems towards ensuring that only competent, capable service-oriented people of character get into leadership and the civil service is restructured to deliver.

“Government must create the right environment for business and investment to flourish as this is the only sustainable way to create employment for and positively engage our teeming youths as a way of utilising their creative youthful vigour and keep them out of mischief;

“Protests, especially large-scale protests like the #EndSARS protest, must have clear goals, milestones and an endgame to avoid long drawn out street engagements that could snowball into the uncontrolled riots and violence.

“In conclusion, we condole with all the families that have lost loved ones in the cause of the protests or the later violence that followed the protest. We also sympathise with other victims who were either wounded or lost valuable properties to the hoodlums and anarchists. We call on all well-meaning citizens and protesters to suspend any plans to go back to the streets and take the engagement to the judicial panels being setup in each state.

“The government, on its part, should use this opportunity to proactively embark on a wholesale review of the National Security Achitecture, condition of service of our uniformed services, especially the Nigeria Police, and bridge the gap in manning and training of the personnel of the Nigeria Police.

“Any reform that would bring about lasting improvement in the police service situation would also address the need for strengthening the intelligence unit of the police, incorporating an independent police ombudsman unit for monitoring police conduct and forestalling corruption of the service, and ultimately acceding to the call for multi-tier policing towards ensuring policing becomes community based and civil.”

What We Discussed With Buhari At Security Council Meeting – Defence Minister