Kaduna State Governor, Nasir Ahmad El-rufai has ordered the arrest and subsequently sent a Kaduna-based journalist, Mr Jacob Onjewu Dickson to Prison Custody, on the allegation of writing a story the state Government described as inciting. Jacob Onjewu was invited by the State Police command over a story an online news medium www.autthenticnewsdaily broke that…”
Yusuf
News 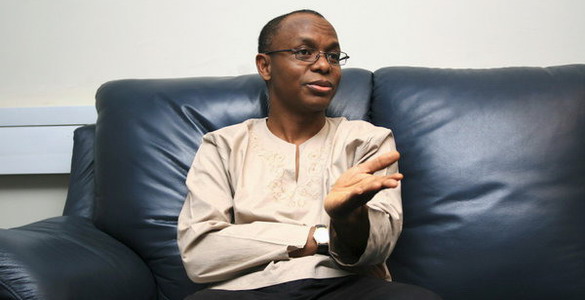 Kaduna State Governor, Nasir Ahmad El-rufai has ordered the arrest and subsequently sent a Kaduna-based journalist, Mr Jacob Onjewu Dickson to Prison Custody, on the allegation of writing a story the state Government described as inciting.

Jacob Onjewu was invited by the State Police command over a story an online news medium www.autthenticnewsdaily broke that the governor was pelted and booed in  Angwan Gado a suburb of Malali axis in Kaduna North local government area of the state where a communal clash was said to have broken out earlier in the week.

The online medium was believed to be managed by Mr Dickson, but the said story was written by one  PHILIBUS DAUDA. Following the report on www.authenticnewsdaily, other conventional media reported the story.

However, Mr Dickson was on Thursday invited by the state Police Command to write a statement and thereafter was detained in the police custody where he passed the night in a police cell at the police headquarters.

Mr Dickson was on Friday shipped to Court, in Kaduna Magistrate  Court 1  where a secret trial was conducted in the judge office and Mr Jacob was asked to be remanded in prison custody without the option of bail.

It would be recalled that www.authenticnewsdaily reported that, Kaduna State Governor, Malam Nasir el-Rufai was said to be stoned by angry youths in Ungwan Gado Community, a suburb of Kaduna metropolis, earlier this week.

It was gathered that the governor was there to broker peace between that community and a neighbouring community, resulting from the gruesome murder of a teenager, a day before his visit.

The incident occurred at about 9 pm, in spite of a strong presence of security operatives, deployed to the area to douse the rising tension.

An eyewitness informed that the governor on arriving the area was pelted, with chants of ‘ba mu so’ when translated from Hausa, means ‘we don’t want you’ chorused by the angry youths.

It was gathered that trouble in the communities all located within Malali axis in Kaduna, broke out when youths suspected to be under the influence of drugs stabbed a teenager to death at a public gathering they all attended.

It is still unclear if the youth that was murdered was a Muslim or Christian, but as it stands, the crisis is beginning to take a religious colouration.

Efforts to reach el-Rufai’s spokesman, Samuel Aruwan and the Police Public Relations Officer, Kaduna State, Zubairu Abubakar to respond to the development proved abortive as calls put to them were not picked. Text message sent to him on the development was also not responded to as at the time of filing this report.

As at the time of this report, tension is still high in the affected communities, with fears that reprisals may take place in other parts of Kaduna.

It was observed that Hausa traders who usually thronged the Yam Market located in Sabon Tasha, a 100 percent Christian community were completely absent from there on Tuesday night as rumours of the crisis spread throughout Kaduna City.