Gov. David Umahi of Ebonyi has pledged not to abandon the Peoples Democratic Party (PDP) in spite of the crisis currently rocking the party at the national level. Umahi made the pledge on Sunday during a Christmas ‘Get-Together’ he organised for the State Working Committee (SWC) of the PDP including its local and zonal committee…”
Editor
featured News Politics 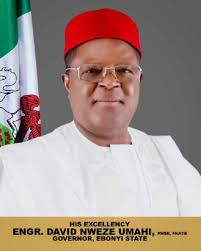 Gov. David Umahi of Ebonyi has pledged not to abandon the Peoples Democratic Party (PDP) in spite of the crisis currently rocking the party at the national level.

Umahi made the pledge on Sunday during a Christmas ‘Get-Together’ he organised for the State Working Committee (SWC) of the PDP including its local and zonal committee members.

The governor spoke against the backdrop of fears in the state that he would soon dump the party due to the crisis and to secure his second-term bid.

According to him, the current challenges confronting the party will not lead to its demise as it will soon fizzle out with the commitment of its dedicated members.

“Anybody who believes that I would leave PDP for the All Progressives Congress (APC) or any other party is sleeping and should be woken from sleep.

“APC and other parties cannot win election in this state because PDP has performed marvellously and cannot be arm-twisted,’’ he said.

The governor said that infrastructure projects, especially roads were being executed in all Local Government Areas (LGAs) of the state, courtesy of the PDP- led government.

‘“We are not just constructing roads but doing so on asphalt and stone base and other sectors such as education, health, agriculture, human empowerment among others, are feeling our impact,” Umahi said.

The governor advised the party leaders to shun corrupt and divisive tendencies in order to succeed and reposition the party for the onerous tasks ahead.

“You must avoid taking bribes, embezzling party funds among other negative acts, as contentment and Godliness is very important to achieve success.

“When you are given N10 million for instance, present the actual amount to the members because the worst thing in life is to embezzle funds meant for all, alone,” he said.

The state PDP Chairman, Mr Onyekachi Nwebonyi, thanked the governor for the reception and pledged to support him in justifying the mandate given to him by the people.

“We have learnt from the mistakes of the past and have been repositioned to maintain our resounding electoral success in 2019 and beyond.

“The people are witnesses to your massive infrastructure strides and impact in all sectors of the state which would make us maintain our overwhelming dominance in the state,” he said.

The Secretary to the State Government, Prof. Bernard Odoh, thanked the governor for identifying with various sectors of the state during the yuletide.

“Ebonyi is the only state that earmarked N1.7billion to touch the lives of its people during this Christmas period.

“This will definitely cushion effects of the current recession in the country and make the people part of the state’s governance,’’ Odoh said

It is reported that the party stakeholders used the occasion to suggest ways of enhancing the party’s well-being and pledged their support for the governor.