Human Rights lawyer, Mr. Femi Falana SAN has backed Professor Wole Soyinka over his comment over the death of former Nigeria Attorney general and minister of justice, Late Chief Bola Ige. Chief Femi Falana, said the killers of Ige must be found. He also noted that Soyinka through his comment shortly after the emergence of…”
Victor
News 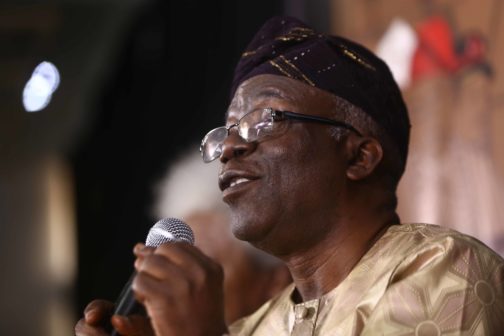 Chief Femi Falana, said the killers of Ige must be found. He also noted that Soyinka through his comment shortly after the emergence of Sen. Iyiola Omisore a prime suspect in the gruesome assassination of the late Ige, as the National secretary of the ruling All Progressive Congress, had reminded the President, Major General Muhammadu Buhari (retd.), of his pledge to open an enquiry into the country’s spate of political murders.

Falana noted, “If you (Prof. Soyinka) are sued, we will represent you free of charge because you are taking on a public issue.”

Recall that Soyinka had some days ago made a public shaking comment about the emergence of Omisore, as the National Secretary of APC. “The resumption of an investigation into Ige’s murder was already hamstrung and disrobed of credibility with the emergence of a prime suspect in the case as the National Secretary of the ruling All Progressive Congress”, the statement expressed by Soyinka on Saturday.

Meanwhile, former deputy governor of the State of Osun, Iyiola Omisore who emerged the party’s national secretary at the 2022 national convention of the APC held from March 26 to 27, In 2002, was arraigned for Ige’s murder but later acquitted alongside 10 others tried for the case, replied to Soyinka’s position in a statement, also instructed his lawyer to write the elder statesman demanding a retraction of the comments.

The Nobel laureate, Prof Wole Soyinka, on Thursday, expressed willingness to be involved in legal proceedings to unravel the killers of a former Attorney General of the Federation and Minister of Justice, Chief Bola Ige.

Soyinka’s statement has prompted reactions from different corners across the country in the last one week.