Maritime Workers under the aegis of the Maritime Workers Union of Nigeria (MWUN) have paralyzed activities at both the entry and exit gates of the APM Terminals (APMT), Apapa, Lagos State. The workers in their hundreds who accused the terminal operator of flagrant abuse and breach of Nigerian content law, were carrying placards with different…”
Olamide
News 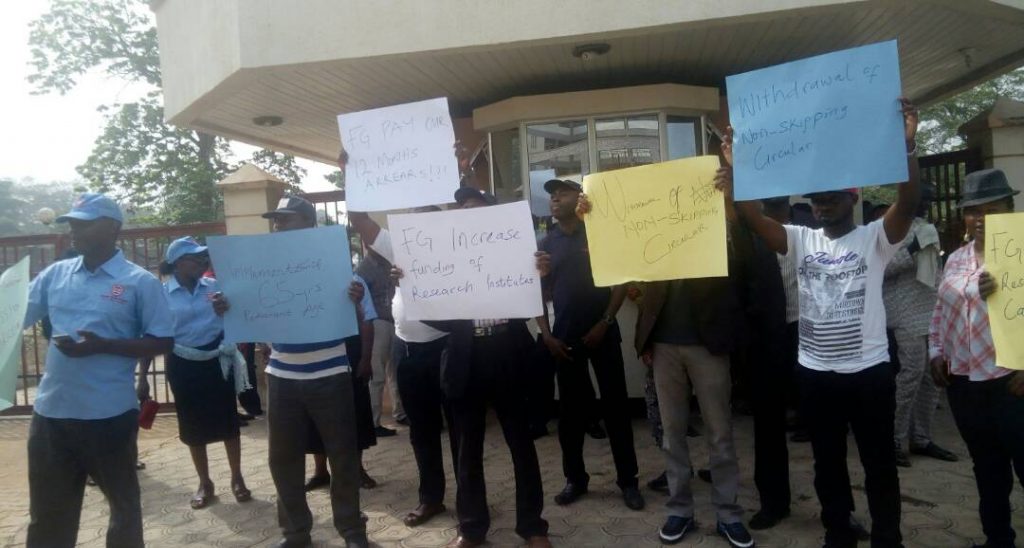 Maritime Workers under the aegis of the Maritime Workers Union of Nigeria (MWUN) have paralyzed activities at both the entry and exit gates of the APM Terminals (APMT), Apapa, Lagos State.

The workers in their hundreds who accused the terminal operator of flagrant abuse and breach of Nigerian content law, were carrying placards with different inscriptions campaigning against rascism and maltreatment amidst others.

It was gathered that before the premises of the largest container terminal in Africa was shutdown on Thursday, April 15, over alleged racism and breach of agreement, the maritime workers had earlier given ultimatum, and that at the expiration of the ultimatum, the terminals activities will be leveled down.

The management of the APMT have in the past three weeks, been in a running battle over the replacement of Nigerians with foreign workers.

Last week, both parties entered into discussions in an attempt to resolve the issue but failed to reach an agreement after the management was alleged to have refused to give a time frame when some of the foreigners would leave.

Reports have it that the management had claimed the foreigners were brought in to train Nigerians.

The union, therefore, made good its threat on Thursday morning when aggrieved workers blocked all entrances to the terminal even as they turned back staff from gaining entry into the facilities.

Prince Adewale Adeyanju, President General of MWUN, who confirmed the shutdown of the terminal said “The workers have shut down the terminal because of the anti-labour practices going on at APMT

“It depends on APMT, let them go and reposition themselves and follow due process in line with the National Joint Industrial Negotiating Council, NJIC agreement that we signed with them. It is by law. They are taking advantage of Nigerians and bringing in foreigners to take over our jobs. Now the workers have taken their fate or destiny in their hands that they won’t allow this to happen.

“The jobs that Nigerians can do, APMT is bringing in Egyptians, Ghanaians, among others to come and head departments that Nigerians have been heading. The white man heading the terminal has no regard for Nigerians. He is in our father’s land and yet he would be calling us all sorts of names. This is totally unacceptable. It is too bad.

They don’t like us, yet they are making a lot of money in Nigeria, and taking the money back to develop their own country at the expense of Nigerians.

He then implored the Nigerian Immigration Service to investigate and look into the foreigners engaged by APMT to take jobs belonging to Nigerians.

“Immigration should check what their work permit says, you cannot just come into this country as an expatriate, you must have your work permit.”

Boko Haram: UK Committed To The Fight Against Terrorism