By Sodiq Yusuf The world over, the media is seen as the 4th estate of the realm. The reason not far-fetched because of the pivotal roles the sector plays in everyday life; because lack of Information causes Ignorance. It is of this essence that timely, actual, factual, accurate and most importantly objective information is needed…”
Yusuf
featured Op-Ed 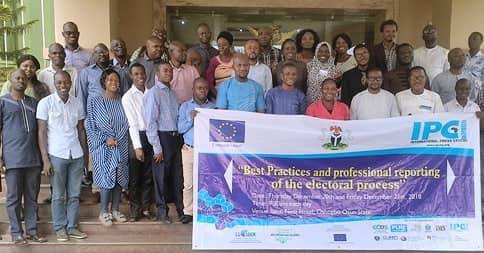 The world over, the media is seen as the 4th estate of the realm. The reason not far-fetched because of the pivotal roles the sector plays in everyday life; because lack of Information causes Ignorance. It is of this essence that timely, actual, factual, accurate and most importantly objective information is needed to keep the world going.

And as sensitive and fundamental the role of this necessary component of society is expedient, so it is with rules and regulations or what is called Ethics in the Academic World. From Human Interest, Sports, Politics, Education, Health and so on, the media mirrors happenings in the society and feed the society with the information that emanates from it. Asking people questions about what is going on in their lives and telling them the stories.

Every minute, hour, day, week, month and year round, the media brings to the people varying perspectives about different subjects which are most times feed the curiosity of the audience. One of those sensitive and important roles the media has had to deal with is telling people what happens in their Political Environment. Politics all over the world is played by smart, intelligent, trained and very eloquent minds who have different tools to change narrative, mould perspectives and define the space of governance; even sometimes the work of Media Organizations in some Climate.

A Mass Communication Scholar, Denis McQuail in his theory of Media defines its roles as just 3: Oil, Glue and Dynamite. In the explanation of his theory, the media holds the society with what it gives to the society with its bold Glue, makes the society run very well daily like a car engine that depends on Oil and performs the work of Dynamite in fighting for the people when they are either cheated or oppressed majorly by Political Forces.

Politics is a dirty game everywhere on the planet; Earth. It is one of the most interesting, challenging and critical areas the media cover. There are several interests to cater for in this definitive structure of Human society; from Parties, Interest Groups to the ones with the power – The Electorate. Varying media organizations at one time or the other have been found wanton of bias in their Political Reportage.

For example, two popular mediums in the United States of America; The Cable News Network – CNN and FOX News are believed to be for the two main parties in American Democracy. While the CNN is reputed for its stiff opposition and criticism of the Donald Trump presidency and so is with state-owned FOX News which traditionally hails every step of the government without possibly looking back.

Back home in Nigeria, the media is of essence. Virtually a day does not go in Nigeria’s 19 years of Democracy without one Political Issue or the other being of keen interest to these media firms. And with Elections being the defining moment for the reign or stay of Politicians in office in the most populous black nation like its peers globally, it is always a do or die affair. Although, the contest is heated by the vituperations of gladiators, the contribution of the media to make the polity more tensed is evident in the myriad of sensational, violence-breeding and War-inducing headlines.

Feuds, Differences, Hate Speech and Violence are the major characteristics of the conventional Nigerian Political system. Whenever events like this happen, it comes to the place of the Media to bring to bear; its expertise, know-how and professionalism to handle such situations.

With representatives of the Print, Broadcast and the New Media in attendance, the gathering brought salient minds in Journalism together with a common goal; to learn more, get exposed to the new trends in the media world as well as adapting to the Ethics of the Profession. Posers were also raised on how to deal with issues professionally considering the Proprietorial factor in many media organizations.

The don while touching on Pre-bendalism and God-fatherism in Nigerian politics was quick to urge the Election Reporter to cross check facts, write objectively and be mindful of the use of Language. Prof Popoola posited that the bane of various Political Conflicts is fueled by the reportage of such issues which importantly needs to be adequately addressed to make reports Reliable, Verifiable and devoid of foul languages.

Journalism being an evident based practice deals with a lots of Facts. In its imperial definition, Facts are Sacred. This culminates in the relevance and importance of facts to writing a balanced and factual news story. However, various statements are made pre, during and post electioneering. This is why a responsible journalist must take into consideration in his practice; the habit and culture of Fact-Checking.

David Ajikobi, the Lead contributor to Africa Check, the first Independent Fact-Checking Organization in Africa told us at the Workshop that fact checking is imperative to assess the quality of information dished out by various players in the socio-economic life of the society especially Politicians during elections.

He stressed the need for Journalists to assess claims made in the public arena using Journalistic skills and Evidence drawn from publicly available experts. Various fact checking indices like Historical Data, Comparisons, Statistics and its Legality according to the Tech expert are expedient for every media practitioner so as not to feed the public with inundated, unverifiable and incorrect information.

The two areas of Conflict-Sensitive Reporting and Fact-Checking go side by side. As it remains less than 45 days to the 2019 General Elections, Election Reporters, Media Executives and Government Propagandists must learn to allow for a free and democratic press. For a Democracy to thrive and grow as we enter two decades of its experience in Nigeria, stakeholders in the Media and Politics should see the next elections as a platform to improve our electoral process, fashion out strategies of bettering the lots of Nigerians and building a violence, crime free society as we evolve in our Electoral Process.

Osun: Preparing For The Future

Sustainable Development In An Emerging State Like Osun By Rauf Aregbesola