By Sola Jacobs Some groups of women have resolved to take lead role in the fight against corruption, as it has negative effects on their general well-being. This was the resolution of women from various associations in the state of Osun at a two-day workshop organised by the Women Advocates Research and Documentation Centre (WARDC)…”
Yusuf
News 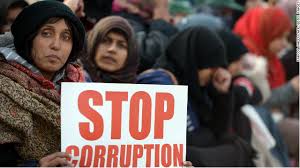 Some groups of women have resolved to take lead role in the fight against corruption, as it has negative effects on their general well-being.

This was the resolution of women from various associations in the state of Osun at a two-day workshop organised by the Women Advocates Research and Documentation Centre (WARDC) in Osogbo, the State capital.

According to the Director of the organisation, Dr Abiola Akiode, corruption is a phenomenon which promotes conflict and prevent better growth and services.

She stated further that the workshop seeks to change corrupt tendencies which had permeated all institutions.

To prevent and fight corruption, she opined that there is need to demand for accountability and challenge corruption, in all  sectors of  governance.

She also emphasised that women should be voice for others, especially those at the grassroot, while the various institutions and systems should create enabling environment for women to challenge accountability.

In his own contribution at the workshop, Dr Kehinde Olayode of Obafemi Awolowo University Ile-Ife said that there is corruption in Nigeria and the government had been using it as a political instrument to hold the country.

He stated further that the recent negotiation of the Federal Government with the abductors of Dapchi girls, whereby money exchange hands with insurgent group, revealed that people in government benefited from the gesture.

Dr Olayode said except there is a restructure of the state and the country truely true federalism, fight against corruption will continually be a mirage.

He was of the opinion that political corruption is endemic and systemic in Nigeria.

Another speaker at the workshop, Dr Iyabo Bashir delved on “Gender and Corruption in Nigeria” and said men and women defines corruption differently as women tends to see it as a moral issue, whereas men see it as a legal issue.

In her summation, corruption thrives where there are institutional lapses, weak justice system and space for discourse.

To stem the tides of corruption in Nigeria participants were of the opinions that crusade against corruption must be championed by each family, society and the nation at large.

It was also agreed that poverty must be stamped out of the society, if the war against corruption must be won.

The participants agreed that while there is need to strengthen the institutional system, remove obsolete laws, demand transparency and accountability from those in government,  there must be stringent punishment for those found committing the act.

The workshop also sought to make women identify corruption practices, not engaging in it, forms groups to fight it in all entity as they are at the receiving ends of negative effects of corruption in society and the nation at large.

Osun Must Focus On Localisation To Be Self-dependent, Says Expert