Nobel Laureate Wole Soyinka has accused that government of encouraging herdsmen attack in several parts of the country. Soyinka who spoke at a press conference on the damaging consequences of marauding herdsmen on the nation, noted the unforced errors going on in the nation with the theme: “Herdsmen and Nation: Valentine Card or Valedictory Rites?”…”
Editor
News 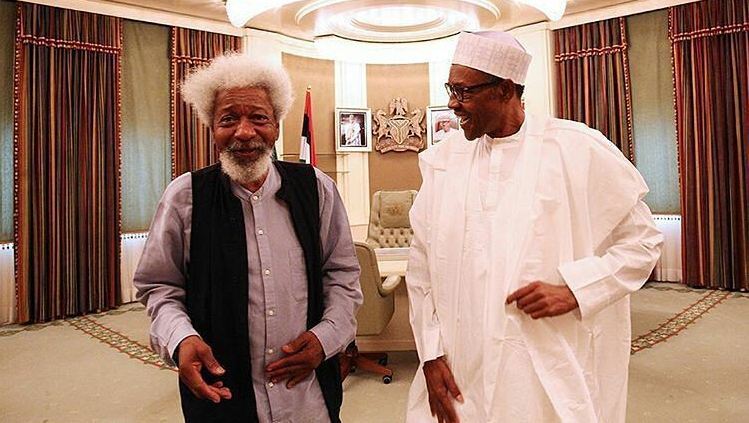 Nobel Laureate Wole Soyinka has accused that government of encouraging herdsmen attack in several parts of the country.

Soyinka who spoke at a press conference on the damaging consequences of marauding herdsmen on the nation, noted the unforced errors going on in the nation with the theme: “Herdsmen and Nation: Valentine Card or Valedictory Rites?” said the sooner Buhari gets out of that trance, the better for the country.

Prof. Soyinka gave an analogical tale of a state whose master’s insensitivity allows for the overbearing actions of his subjects.

He lamented that mass destruction of farmlands in the most horrifying manner had become a norm, festering with the encouragement of the government’s body language.

Soyinka described as appalling the position of the Inspector General of Police that the loss of lives in Benue State, and consequent increase in the number of internal refugees, was simply a communual clash.

In his view, little will be achieved in security without state police.

“If the IG can sit in Abuja and say of an event that is happening under the jurisdiction of a governor in another state is just a communal clash when people are being slaughtered and their villages are being occupied, it shows complete alienation. Then there is the authority of Governors who have the ultimate authority for security. It is the governor who is supposed to be the chief security officer. We are now back to authoritative voices saying indeed, state police need to be decentralised. We have been saying it and others have been saying for a long time. We are now getting back to the commonsensical issue that the nation cannot function under a single police command,” he said.

Acknowledging, however, that the Nigerian Army has done marvelously in degrading the capacity of the Boko-Haram insurgents, the poet-activist said “it must now turn around to face another phenomenon which is considered in some international circles deadlier than the Boko-Haram”.

According to him, the containing efforts happening now should have begun six months as he expected the force to have immediately transferred its concentration from operations, such as Python Dance and Crocodile Smile to where the heat was.

He said the security agencies have the responsibility to look at highly-placed people in whose interest anarchy can be fostered.

Soyinka added: “Why colonies were brought in to complicate things, I do not know. Ranches; that’s the word used everywhere. There is no organized illegal force that does not sooner or later spin up. Are these internally generated or are they being launhed by individuals who in their interest the nation must be in a state of anarchy? We sometimes talk about corruption but we don’t understand how far corruption goes. When you think of the amount being stolen in this country, enough funds illegal fund to destabilise the country. We might end up discovering that some of these people profit from ensuring there is chaos from Maiduguri to Lagos.”

Speaking on restructuring, Soyinka said: “Sooner or later, people will recognise the fact it’s not broken record they are listening to, it’s their hearing that is impaired. In other words, we have been shouting restructuring, now its inevitability has always been stressed. The internal relationship of the units of this country be decentralised. And anytime you talk about restructuring, you hear this gibberish that the sovereignty of this country will not be compromised. Who is talking about sovereignty? We are saying the internal components of the country needed to be addressed … We must decentralise governance.”

Asked what he would tell President Buhari if he met him, the Nobel laureate said: “I would say: Mr President, I think you are under a trance. “The sooner he gets out of it the better. So many unforced errors are going on,” he added.

Prof. Soyinka cited Buhari’s recall of the Executive Secretary of the National Health Insurance Scheme (NHIS), Usman Yusuf, after he was suspended for alleged graft by Minister of Health Isaac Adewole, as a recent example of the unforced errors that have characterised the administration.