Patrice Evra is back to football after the 36-year-old free agent and five-time Premier League winner was bailed out by Westham The former Manchester United star who scored the final United goal of David Moyes’ short reign as Old Trafford boss, will wear the jersey No 27 which was kast worn by Dimitril Payet Evra’s…”
Editor
Sports 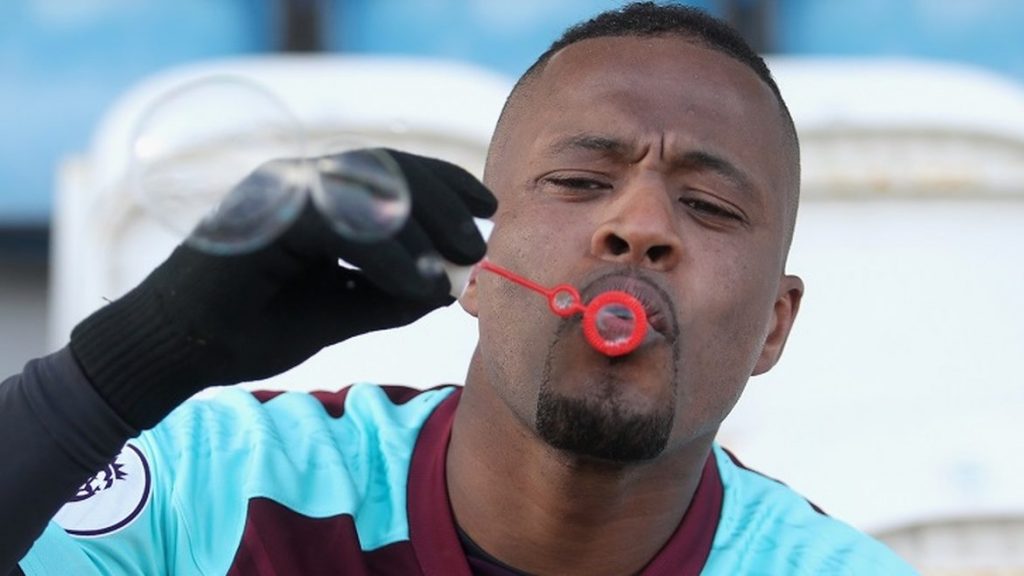 The former Manchester United star who scored the final United goal of David Moyes’ short reign as Old Trafford boss, will wear the jersey No 27 which was kast worn by Dimitril Payet

Evra’s move to West Ham comes less than three months after he was sacked by Marseille for aiming a kung-fu kick at an abusive fan.

That incident occurred during a Europa League game and evoked memories of Eric Cantona’s astonishing attack on a Crystal Palace fan. Evra’s kick earned him an £8,000 fine and a UEFA ban from European competitions — although he is still eligible to play in the Premier League.

The eccentric left back, whose contract runs until the end of this season, was registered in time to feature against Watford at the London Stadium on Saturday.

Evra brings a great deal of experience with him, having won the Champions League at United under Sir Alex Ferguson in 2008.

The signing comes five days after West Ham sacked director of recruitment Tony Henry, who Sportsmail revealed had told agents he did not want to sign any more African players. Evra was born in Senegal and has been capped 81 times for France.

Evra is free to play in the Premier League, despite picking up a European ban by UEFA

‘I’m really happy to be a Hammer, to be back in the Premier League and I love this game,’ said Evra, whose unveiling video included shots of him blowing bubbles.

‘It’s amazing to be back and I am thankful to West Ham for giving me the opportunity to do my job. You don’t realise how lucky you are and just to wake up this morning and know I am going to train with my new team-mates made me smile. It happened really fast.

‘My agent called me and told me I needed to come back from Dubai to London as quickly as I could and I had a nice meeting with the manager, who I know from Manchester United, and I met the chairman, David Sullivan, so it was really easy.

‘When you have to make a deal and money is not the issue, the deal can be done in five minutes.’

Evra, who could face United when they travel to east London on Sunday March 18, had no problems in passing his medical at West Ham’s Rush Green complex after keeping himself fit while he has been without a club.

Meanwhile, angry West Ham fans are planning a large protest ahead of their home game against Burnley next month, involving hearses and a march to the London Stadium.

A funding page has already passed the £25,500 mark and the fan group behind the demonstration on March 10 may also stage a mock funeral at their old Upton Park site.

Fans are unhappy about ‘broken promises’ made by the club’s board and were unimpressed by activity in the January transfer window. The Real Fans of West Ham Action Group, who are organising the protest, are in talks with the Metropolitan Police to finalise the details of their march.

A spokesman for the group said: ‘We actually just want what the board promised us — a successful football club.’

During West Ham’s 3-1 defeat at Brighton on Saturday, visiting supporters unfurled a ‘sack the board’ banner as they pile pressure on Sullivan, David Gold and Karren Brady.

Whatever money is left over from the funds raised for the protest will be donated to West Ham fan Isla Caton, a three-year-old girl suffering from neuroblastoma, a rare cancer.

‘I really feel blessed to be here, let’s work, and don’t forget I love this game,’ Evra said

The defender has been given the No 27 shirt, previously worn by compatriot Dimitri Payet