By Nofisat Marindoti Governor, State of Osun, Ogbeni Rauf Aregbesola has bemoaned the evils of war and its subsequent consequences.  Launching the Emblem commemorating the 2018 Armed Forces Remembrance Day at the Government house in Osogbo on Monday, Aregbesola expressed that War, no matter how justifiable, is bad business anywhere. “I soberly and thoughtfully welcome you…”
Yusuf
featured Osun 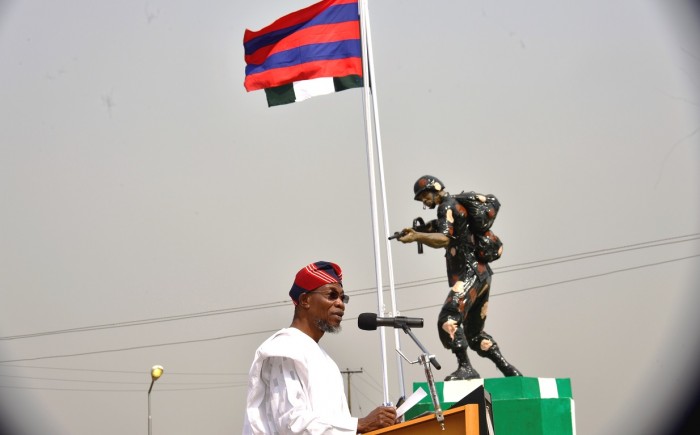 Governor, State of Osun, Ogbeni Rauf Aregbesola has bemoaned the evils of war and its subsequent consequences.

Launching the Emblem commemorating the 2018 Armed Forces Remembrance Day at the Government house in Osogbo on Monday, Aregbesola expressed that War, no matter how justifiable, is bad business anywhere.

“I soberly and thoughtfully welcome you all to this important National event, the launching of the emblem in remembrance of our soldiers that died and were wounded in war and to honour and support the veterans that are alive.

“These are soldiers who gave their lives in wars beginning from the First World War, Second World War, the Nigerian Civil War and the various armed engagements to defend Nigeria’s territorial integrity and keep our people safe.

“This is to commemorate also the Nigerian Civil War that was fought to keep Nigeria one. In all these wars, many lives have been lost, many more wounded and unquantifiable property destroyed. Many of the wounded regrettably lost limbs, while others suffered permanent incapacitation requiring hospice and dependency for the rest of their lives. There are others alive that carried scars from the horrors of war, on their minds that may never heal. We pray that God almighty will comfort them and heal their souls.

“War, no matter how justifiable, is bad business anywhere. This is why we must all work towards avoiding one, at all cost. When a soldier is killed, a dream dies. A woman becomes a widow, some children lost a father and some parents lost a promising son.”

Aregbesola thereby urged the people to embrace peace, be law abiding instead of resorting to war.

“We must all remember the factors that led to the wars that claimed such noble lives. A common factor being mindless pursuit of one’s interest, not caring how it affects others and what will be the consequences. Another being the penchant to incite others to hatred and violence. Others include the false sense of racial, religious or ethnic superiority and the tendency to look down upon and oppress those that are different from us religiously, ethnically, socially, economically, politically and ideologically.

“The best way to honour the memory of the dead is to prevent wars, in order that their sacrifice will not be in vain.

We must find a way to make the veterans to be productive. It is regrettable that our society has only engaged them in security and mostly driving duties.

“The veterans should also demonstrate good citizenship by being law abiding in the society. Too often they tend to settle dispute with force, side stepping the rule of law, in a way that suggests that they do not subscribe to the rules of the larger society.