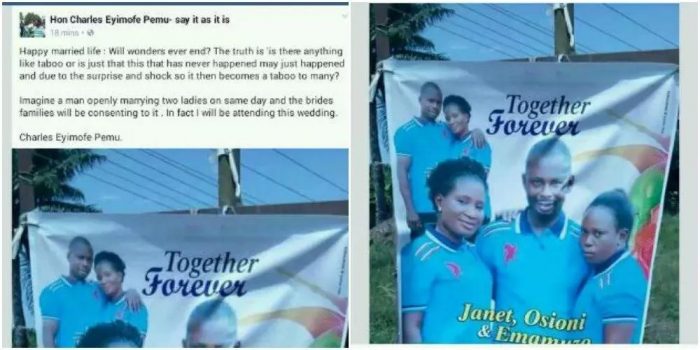 A Nigerian man named Emamuzo is about to marry two ladies, Janet and Osioni on the same day. The wedding banner features him with the two ladies and also him with each of them separately.

NAIJ.com noticed Facebook user Hon. Charles was one of the first people to speak on it. He said: “‘Happy married life : Will wonders ever end? The truth is ‘is there anything like taboo or is just that this that has never happened may just happened and due to the surprise and shock so it then becomes a taboo to many?”

“Imagine a man openly marrying two ladies on same day and the brides families will be consenting to it . In fact I will be attending this wedding.”

It seems people are upset by the way the man has proudly announced his wedding or perhaps the audacity to marry both at the same time instead of one after the other. What do you think?

Majek Fashek Denies Ever Being A Drug Addict