VIDEO: Kemi Olunloyo In Tears As She Kneels, Begs Pastor Ibiyeomie, Vows To Spend Her Life In Salvation Ministry

Daughter of a former governor of Oyo State, and a US-trained controversial journalist, Kemi Olunloyo, has attended Salvation Ministry where she asked Pastor David Ibiyeomie for forgiveness. Kemi was allegedly locked up in Port Harcourt prison by the pastor after she accused him of dating and buying expensive cars for some Nollywood actresses. The…”
Yusuf
News 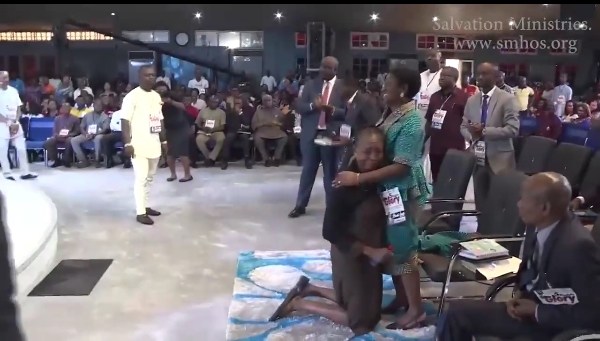 Daughter of a former governor of Oyo State, and a US-trained controversial journalist, Kemi Olunloyo, has attended Salvation Ministry where she asked Pastor David Ibiyeomie for forgiveness.

Kemi was allegedly locked up in Port Harcourt prison by the pastor after she accused him of dating and buying expensive cars for some Nollywood actresses.

The journalist, known for making shocking revelations about people, was released from prison last week, after spending over a month in her second stint.

In a post she shared on her Instagram page, @HNNAfrica, Kemi, who cried out during the week that her health was failing her, also claimed that a touch by the Pastor healed her of asthma and migraine.

She wrote, “@david_ibiyeomie officially helps me surrender my life to Jesus.

“Been doing outdoor therapy as instructed by my psychotherapist. Venturing out safely into neighborhoods which I’ve been doing as part of my treatment of depression.

“I normally go to 3pm prayers at the Catholic church down the street to get spiritual energy. Last night, I decided to go to New GRA to worship at#Salvationministries.

“I walked into the kingdom of God like no other. This church was very different. I was lifted! They were having 4.30pm prayers after a 21 day fast. I joined them in an energized service in a God anointed mega church. I ate communion and drank wine. The Lord was everywhere!

“After service I asked security personnel to meet Pastor Ibiyeomie privately in his office to pray for me. The men in black suits took me to a waiting room and then asked me to come in.

“There were 5 pastors in the room watching. Two were my prosecuting lawyers, then I walked up to him telling him I was the one he locked up in prison! I knelt down and he grabbed my hands.

“Suddenly my all day asthma wheezing and migraine vanished! He had divine powers of some kind. He prayed for me, told me he had forgiven me long time ago and repeated it in front of me again. I told him I was not bitter and have forgiven him too.

“I have decided to serve God and it will be through Salvation Ministries and him.

“Pray that the holy spirit transforms#DavidIbiyeomie into a greater realm of sensitivity, revelation, and divine direction that will give birth to manifestation of the holy spirit in time for next week 22nd-26th January 2018 when he invited me for his #5NOG 5 nights of glory. He says miracles happen during that week.

“My miracles started last night. I will give my compelling testimony soon. I am never leaving PH again. I begin serving the Lord here working in his church and will stoop to conquer flying my flags with Jesus here at Salvation Ministries.”

Osun Is Poised For Good Governance In 2023 – Adeleke