University Of Ilesa: Workers Fume, Call For Review Of Law

Ismaeel Uthman Staff of Osun State College of Education, Ilesa which has been upgraded to University of Ilesa, have claimed that their fate is hanging in the balance, following the creation of the varsity. According to the staff, the existing workers of the college are not being integrated into the University of Ilesa, and there…”
Yusuf
Education featured hero Osun 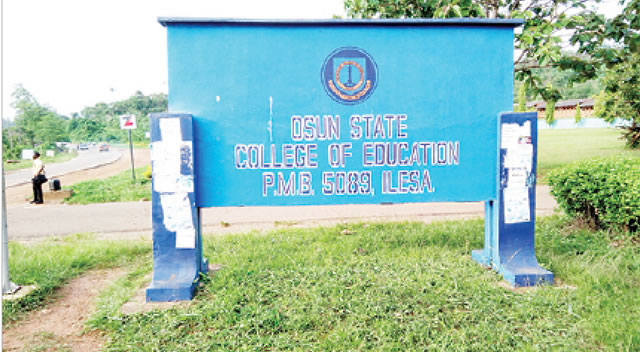 Staff of Osun State College of Education, Ilesa which has been upgraded to University of Ilesa, have claimed that their fate is hanging in the balance, following the creation of the varsity.

According to the staff, the existing workers of the college are not being integrated into the University of Ilesa, and there is no modalities for settling outstanding liabilities of the OSSCE, Ilesa.

In a letter written by the Negotiating Council of Non Teaching Staff and Senior Staff Union of College of Education, Ilesa chapter, the workers called on the State Government and House of Assembly to review the law establishing the university to take care of their employment and other important issues.

The workers also frowned at the appointment of Principal Officers into the University of Ilesa without consideration and input of the senior staff of the college.

They also condemned prohibition of unionism in the University of Ilesa, describing it as uncalled for and undemocratic.

According to the workers in the letter signed by the Chairman of SSUCOEN, Comrade Olarenwaju A.F. and NASU Chairman, Comrade Adepoju M.A, there is need for the review of the law establishing the university, saying there are many unaddressed matters in the law.

The workers said: “In order to ensure that the University takes off on sure footing, we wish to intimate your good offices of our observations relating to flaws in the law as well as the flawed approach adopted by the Implementation Committee, and suggest necessary amendments in the law and correction of some of the steps already taken by the Implementation Committee.

“After careful study of the law, we wish to observe that there is no part of the law addressing the integration/transition of staff of the defunct Osun State College of Education, Ilesa into the UNILESA for continuation of their career.

“An amendment should be made to the law to allow all staff of the defunct Osun State College of Education, Ilesa to be unconditionally integrated to the UNILESA as staff and placed on positions commensurate with their current posts.

“Your Excellency may wish to note that the defunct Osun State College of Education, Ilesa, had been running degree programmes of other Universities for years and the profile of existing teaching and non-teaching staff had always been used to obtain accreditation of the programmes. These same staff profiles were used to obtain the NUC recognition and certificate of practice for the new University.

“It will be morally wrong and unjust for the new University to rubbish the staff that were used to support argument for its existence.

“We observe that the appointment of Principal Officers was rightly put under the powers and functions of the Governing Council as on page 8 through 9 of the law.

“Making another provision under the same law for the appointment of Pioneer Council and Principal Officers as on page 44 is considered by us as unnecessary and capable of undermining the sure-footed take off of the University as due process and international best practices in appointment can be sidetracked hiding under this provision.”

Making their demands, the workers said: “The provision, tagged “Appointment of Pioneer Council and Principal Officers” should be expunged from the law.

“We observe that provision number 13 of page 59 puts a ban on “Staff Association /Unions in the University. We want to state that this provision is un-called for, particularly during a democratic dispensation.

“Labour matters are in the exclusive list of the Nigerian constitution 1999 (as amended) Cap 4 (40), Right to Peaceful Association is enshrined in the 1999 constitution of the Federal Republic of Nigeria.

“Considering the foregoing, we ask that the provision banning union activities in the law in question be expunged. This is moreso because unions are already existing peacefully in the defunct College and playing critical roles in ensuring smooth management/staff relations.

“We ask that the modalities for staff Pension Scheme be spelt out in the law to enable us know where we belong.

“We ask that the government should state categorically the modalities for payment of the arrears of the peculiar allowances owed staff of the defunct Osun State College of Education, Ilesa transiting to UNILESA.

“We ask that since the new UNILESA is fully owned by the Osun State Government which also owned and controlled the activities of defunct OSCOED, Ilesa, the government should state categorically the modalities for the payment of the arrears of salaries owed the staff of the defunct OSUN State College of Education, Ilesa transiting”