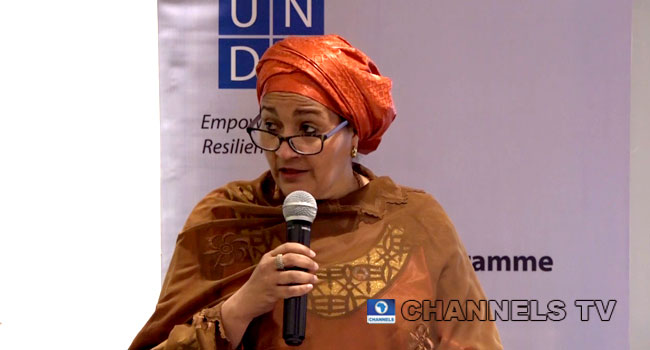 The United Nations has reappointed Amina Mohammed from Nigeria as Deputy Secretary-general of the organisation.
It was gathered United Nations Secretary-General Antonio Guterres has been unanimously re-elected for a second five-year term by the 193-member United Nations General Assembly.

Guterres’ second term starts on January 1, 2022, and will run for a period of five years. He succeeded Ban Ki-moon in January 2017 as the ninth secretary-general.
While speaking with journalists after taking the oath of office for a second term, he said has extended an offer to Mohammed to continue in office.

“After being elected, I have the pleasure to invite the deputy secretary-general to remain in my second mandate and I hope she will accept,” he said.

Mohammed, who was standing behind Guterres at the press briefing, responded with the comment “absolute honour”.

Mohammed is a diplomat and politician who is serving as the fifth Deputy Secretary-General of the United Nations.

She had also served as the special adviser to Ban Ki-moon on post-2015 development planning, which focused on the 2030 agenda for sustainable development goals.

Previously, she was Nigeria’s Minister of Environment from 2015 to 2016 and was a key player in the Post-2015 Development Agenda process.

Mohammed was born in Liverpool, the UK to a Nigerian veterinarian-officer and a British nurse. She is the eldest of five daughters.

O.J Simpson Is Living Life To The Fullest After Release From Jail