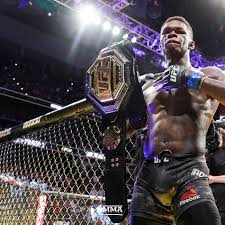 Nigeria’s Israel Adesanya won on a unanimous decision in a rematch against Italian Marvin Vettori to retain his middleweight championship at UFC 263 Saturday night.

At the third full-capacity UFC event without coronavirus-related restrictions, Adesanya won 50-45 on all three judges’ scorecards.

Adesanya’s prowess in using his feet effectively helped in keeping Vettori off balance for the better part of the rematch. Renowned as one of the best strikers in the division, the 31-year-old landed several leg shots and jabs as he dimmed Vettori’s dream of becoming the first Italian UFC champion.

Adesanya and Vettori fought in Glendale three years ago, a split-decision win by Adesanya that left neither fighter satisfied.

Vettori believed he won, Adesanya thought it was too close and the buildup to the rematch was contentious, including an off-the-rails news conference Thursday.

Adesanya lost to light heavyweight champion Jan Blachowicz in his last fight while trying to add a second title belt, but remains undefeated as a middleweight.