Two students of the Kwara State University, KWASU, Malete, Animasahun Rokeeb Mayowa and Lawal Alamin Tewogbola were on Tuesday, convicted and sentenced to various jail terms by Kwara State High Court in Ilorin for offences bordering on cyber-fraud. The duo of Animasahun and Lawal, who are natives of Oyo and Offa in Oyo and Kwara…”
Olamide
Crime News 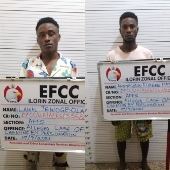 The duo of Animasahun and Lawal, who are natives of Oyo and Offa in Oyo and Kwara States, respectively were prosecuted on separate charge by the Ilorin Zonal Command of the Economic and Financial Crimes Commission, EFCC.
The defendants pleaded guilty to the charges against them.

Following their plea, counsel to the EFCC, Rasheedat Alao, through Salaudeen Abdulrasaq and Kaludeen Yahaya, who are operatives of the Commission reviewed the facts of the cases against Animasahun and Lawal.

The witnesses told the court how intelligence reports led to the arrest of the defendants in Malete Area of Kwara State with several incriminating documents.

Several documents including their extra-judicial statements and iPhones were tendered and admitted in evidence.

Alao thereafter urged the court to consider the plea of the defendants, the extra-judicial statements, and exhibits tendered and convict them as charged.
Justice Akinpelu in her judgment agreed that the prosecution had established its case against each of the defendants. Consequently, he pronounced them guilty.

The judge sentenced Animasahun to six months imprisonment with option of fine of N150,000.00 (One Hundred and Fifty Thousand Naira ). The court ordered that a Toyota Camry Car 2007 model, which was recovered from him at the point of arrest and the iPhone which he used to perpetrate the crime be forfeited to the Federal Government.

Similarly, Justice Akinpelu sentenced Lawal to six months imprisonment on each of the two counts against him, which would run concurrently with option of N100,00 (One Hundred Thousand Naira ) fine on each count. The court also ordered the forfeiture of the sum of $225 (Two Hundred and Twenty Five Dollars), which he benefited from the crime and iPhone 6, which was used as instrumentality for the crime, to the Federal Government.

Photos: Appreciating The Armed Forces Of Nigeria… Those Who Were Killed, Wounded While In Battle