Secretary of State Rex Tillerson, who’s been staring disbelievingly at Donald Trump since the first day of his bungled presidency, finally called it quits today after months of internal wrangling with his boss.  With multiple news organizations reporting on Thursday that Mr. Trump was preparing to dump the former Exxon Mobil CEO after he had…”
Yusuf
World News 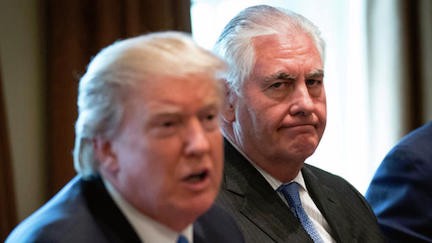 Secretary of State Rex Tillerson, who’s been staring disbelievingly at Donald Trump since the first day of his bungled presidency, finally called it quits today after months of internal wrangling with his boss.

It reads as follows:

That’s right, you heard me correctly, President Moron. With a capital “M.”

And for the record, I didn’t say it just once, but more like a hundred times to anyone in Washington who would listen, because I swear to fucking God that I have never met anyone dumber than you.

Where do I begin to share my contempt for everything you and your extended family of goofball dimwits represents?

Oh, wait, I know, how about we start with your little ass-wipe of a son-in-law, Prince Dunderhead? I knew the second you threw that candy-ass, sniveling milksop into my State Department meetings that he couldn’t pour piss out of a boot if it had a hole in the toe and the directions printed on the heel. The nonsense that came out of that weasel’s mouth was about as welcome as an outhouse breeze and as useless as two buggies in a one-horse town.

Speaking of useless, let me waste a few sentences on that pretty Princess Paramour of yours. Please tell me what the hell that pocketful of pudding is doing in the White House? Trying to have a meaningful conversation with Ivanka is like trying to put socks on a barnyard hen. IMPOSSIBLE! I’d truly rather argue with a wooden Indian than listen to that vertical mashed potato’s fatuous chatter for one more minute.

And since absolutely everyone but you knows that Steve Bannon is still pulling at your puppet springs, let me briefly comment on that festering hog. This guy is such a lowlife he has to look up to see hell and so crooked that if he swallowed a nail he’d spit up a corkscrew. I have never had one conversation with that conniving dog where I didn’t walk away scratching fleas. If you were even one twig smarter than that barn swallow’s nest sitting on your head, you’d see that Old Stevie is playing you like a fiddler at a West Texas kicker dance.

I could go on, but I’m a polite fella and, besides, I’ve only got a minute before I have to catch the Exxon jet back to Houston where I’ll resume my $45-million-a- year job managing people who have no slack in their ropes and aren’t on a first name basis with the bottom of the deck.

Now, as I return to my preferred position as a titan of industry (a real one, not a bankrupt idiot businessman like you), I want to share some words of Texas wisdom from Mama Tillerson that helped me get through the past ten months every time I thought of your gargantuan stupidity: “Sometimes, Rex, you just have to close your eyes, take a deep breath, count to ten, remind yourself that you wouldn’t look good in prison stripes, and just smile at the dumb-ass and walk away.”

So, goodbye, you mind-boggling bozo.

P.S. Just a reminder, you lost the election by 3.5 million votes, which is roughly the populations of Houston and Dallas combined. Where I come from, that’s called a whupping!