Thank You For Your Loyalty- APC to Osun People

The All Progressives Congress (APC) in Osun has praised the people of the state, including the civil servants for ‘their loyalty and understanding in the difficult period of massive economic recession that Nigeria has been living through since 2014’. In particular, the APC said that the party was ‘proud of the people’s resilience and determination…”
Editor
featured hero Osun 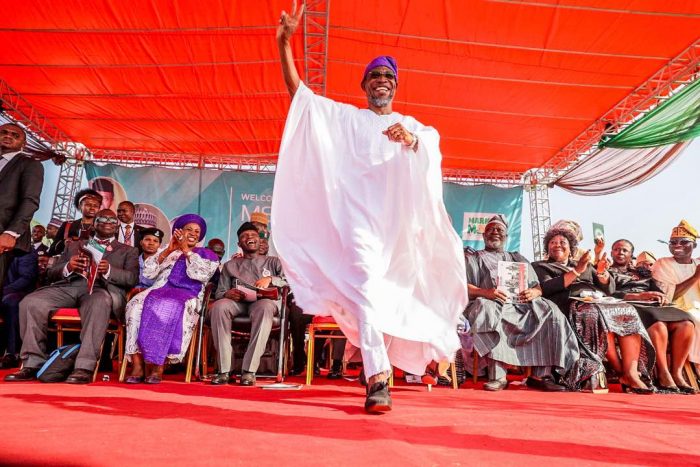 The All Progressives Congress (APC) in Osun has praised the people of the state, including the civil servants for ‘their loyalty and understanding in the difficult period of massive economic recession that Nigeria has been living through since 2014’.

In particular, the APC said that the party was ‘proud of the people’s resilience and determination to forge ahead with progressive ideas in spite of the difficulties that 2017 has presented’.

These compliments were contained in the end of the year message from the party’s chairman, Prince Gboyega Famodun, issued to the media in Osogbo on Sunday.

According to the party, ‘regardless that the state is one of the least resourced in the Nigerian Federation, it has demonstrated perhaps the most innovative capabilities in effecting the changes and developments necessary for economic growth in unprecedented circumstances.

‘We have seen one of the most destructive opposition yet in Osun over the last seven years and the most evil campaign is in the making to lay to waste all that Aregbesola-led APC government has done since 2010.

‘But you, the people of Osun have seen it all; you have experienced the difference between light and darkness, evil and good and you are in the best position to make a choice.

‘In 2014, amid a vicious PDP campaign, which drew blood and tears from the people, Osun stood firm behind the good, and they threw evil into the garbage heap.

‘Yet, for the second time in four years, the good people of Osun will again be required to decide whether they will reject the evil as they did in 2014. That momentous year starts this January.

‘In 2003, Osun made a terrible mistake to give the PDP a chance. It was such horrible experience that in 2007, they had to vote that party out of office. Their choice was violated until 2010 when justice was served.

‘However, evil continued to fight to steal the soul of Osun, but in spite of all the then Federal might and force of violence, the people of Osun stood their grounds and the PDP was again rejected.

‘This year, they will be pitching up a battle royale in the unlikely event of attempting to capture Osun and avenge 2007 and 2014. And like wounded lions, they will ravage the state by discontinuing every policy of the APC (God forbid) that had brought joy to the people of Osun’, the APC warned.

‘Let it be stated in very clear terms; the APC has confidence and trust in the people of Osun that they will vote to continue with the progress so far made by Ogbeni Rauf Aregbesola. That means they will decide to retain APC in power.
It takes a united people to decide to sustain progressive government. We therefore urge the people that in the interest of their children and grandchildren, nothing should be allowed to truncate the progress made in education, in infrastructure, in agriculture and in social welfare as well as in the economy of Osun.

‘We are in the dawn of a new era when Osun will ranked further amongst the leading states of the Federation. And CONTINUITY will be the gateway into that era’, the APC declared.

Buhari To Swear-In Aregbesola, Other Ministers On August 21