Tension In Abia Over Alleged Bribery Plot In Governorship Tussle

Supreme Court has fixed May 12 to deliver final judgment on the Abia state governorship tussle. Samson Ogah is challenging an incumbent, Okezie Ikpeazu, on who was the qualified candidate of the Peoples Democratic Party, in the 2015 governorship election. Ikechukwu Nzeribe in this post alleges that there is a plot to change the favor…”
Editor
News 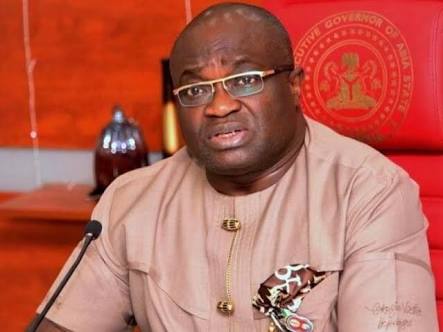 Supreme Court has fixed May 12 to deliver final judgment on the Abia state governorship tussle. Samson Ogah is challenging an incumbent, Okezie Ikpeazu, on who was the qualified candidate of the Peoples Democratic Party, in the 2015 governorship election.

Ikechukwu Nzeribe in this post alleges that there is a plot to change the favor of the judgment between Samson Ogah and Okezie Ikpeazu in court.

A revelation from a group, Abia Democratic Think-tank (ADT), relying on an insider information, alleged that the plot involves directly, on one hand, a high-ranking Supreme Court Judge. On the other hand, a South East governor and same ranking Supreme Court Judge. It is gathered that the plot which is ultimately centered on money and marital relationship sentiments, is being used by the South East governor as a backup to have two high ranking APC personalities in the government endorse the plot.

They plan to endorse with huge sums of money and pledge of decamping to the APC as conditions given to the governor.

The source also disclosed that the plot was actually the reason why the South East governor claimed a few months ago that some governors in the South-East would soon move to APC.

It would be recalled that after the Abia state PDP primaries in 2014 which produced the then governor, Theodore Orji, was alleged to have been manipulated in favour of Ikpeazu. Dr. Uche Ogah had gone to the Federal High Court to challenge the qualification of Ikpeazu to contest the primaries given that he did not only fail to pay his taxes as and when due but also falsified tax clearance certificates and receipts to mislead the electoral body and the party.

Ikpeazu and his people used all sorts of means to frustrate the case with appeals that ended in the Supreme Court which ruled in January 2016 that there is merit in the case and transmitted it back to the Federal High Court for expedited hearing.

In June 2016, the Federal High Court in its judgment held that Ikpeazu actually falsified records and removed him as governor and asked that Ogah is sworn in. Ikpeazu started procuring a back yard stay of execution from a judge of the state high court in Abia. The said Judge has since been dismissed from the judiciary.

The source also disclosed that the Supreme Court has decided to manipulate the upcoming judgment of May 12 in favour of Ikpeazu. Because there are no sufficient legal arguments to say that Ikpeazu did not falsify his tax returns, the Supreme Court is set to deliver the judgment on the basis of technicalities.

One of the technicalities to be used is that Ogah rejected the outcome of the primaries where he came second and cannot turn around and benefit from the same results.

Some of the questionable arguments made by the court of appeal would be rehashed including the issue of originating summons and therefore denied Ikpeazu fair hearing, ignoring the Appeal Court’s earlier decision..

The alleged Supreme Court Judge at the center of this plot, is a blood sister of the wife of a Traditional Ruler from Ikpeazu’s old Obioma Ngwa extraction is involved. Sources close to this conspiracy say the deal had since been sealed a few months ago.

The traditional ruler in question is a beneficiary of a Jeep, a lot of money and a brand new storey building to compensate him and his wife for brokering the deal that is aimed at keeping Abia in perpetual political slavery.

The traditional ruler and another undisclosed personality were said to have expressed anger recently against some high-ranking officials of the state government for their penchant for mismanaging sensitive information especially under the influence of alcohol. They insisted that it would be better the case is lost than to win a case that would turn back to deny them their freedom in the hands of security agents, courtesy of individual blunders, especially during this period of undercover operations.

Ikpeazu and his inner caucus have been celebrating and have told people that Ogah, Otti, and Nwosu are wasting their time and money.

At some point, it appeared that the Supreme Court would not hear Otti and Nwosu, as boasted by one of Ikpeazu’s lawyers until reason prevailed recently and they decided to hear them anyway, to fulfill all righteousness even when the judgment had since been written.

Some of the judges felt that a case of forgery and falsification should not be treated in such a manner as to give the impression that the Supreme Court was tacitly endorsing falsification of records and forgery of documents, especially where it involves high ranking public officials presiding over sensitive positions.

The judgment which has already been written amongst the judges would dismiss Ogah’s appeal for lack of merit and reaffirm Ikpeazu as governor. This is very sad given that majority of Abia people wanted change given the election controversies and poor governorship credentials of Ikpeazu.

This would be the second time the Supreme Court will be inflicting injury on Abia people based on vested Interest. The aggrieved source, according to the group which is said to have been part of the government and its plot until recently shortchanged, and knows almost everything that transpired has vowed to wait patiently for the Supreme Court to execute its coup in favour of Ikpeazu before collaborating with the group in unleashing its full arsenal with indisputable facts that would make many heads roll.

Nzeribe is a public analyst wrote in from Abia State.

Buhari Returns To Nigeria After Medical Trip To London