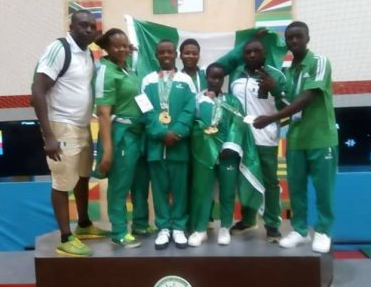 Team Nigeria placed fifth at the third edition of the African Youth Games in Algiers.

Team Nigeria finished fifth behind Egypt, Algeria, Tunisia and Morocco at the end of the 2018 African Youth Games in Algiers.

According to the medals table from the organisers of the games Nigeria had a total of 103 medals with 29 gold, 32 silver and 42 bronze medals.

Algeria finished on the second winning 226 medals, including 71 gold, 72 silver and 83 bronze just behind Egypt.

Sariki lost his final bout 4-0 to Abbes Houari from Algeria after beating Shaaban Abdalla of Egypt by 6-4 and Ghazouani Ayoub of Tunisia by 6-4.

Ozutu, competing in the 48kg lost in the final against Mohamed Benmehiriz of Egypt by 11-1 while Nnaemeka lost to Fathi Ismail by 3-0 in the 65kg final.

Ogidi lost 8-4 to Egypt’s Fouad Ahmed in the 51kg category to settle for silver; while Ladoja also lost to another Egyptian Khalil Ahmed in the 110kg gold medal event.

Tope defeated Pameli Harmalala of Madagascar to win a bronze in the 61kg men’s freestyle. Okafor also beat Mohamed Camara 7-2 points to win a bronze medal in the 55kg fight.

In the women’s category, Morufat Folarin won gold in the women’s 44 kg, while her team-mate Agba Ebelechukwu also dominated the 48kg division winning gold as well.

In Football, Nigeria’s Under 15 national team, lost 3-1 to Morocco in the final. In the men’s handball event, Nigeria clinched the bronze medal after defeating Morocco by 24-17 points. In Hockey, Nigeria’s women’s hockey team lost 2-0 to Ghana in the quarterfinals.

Rosemary Chukwuma won two gold in the women’s 100m and 200m while Meyiwa Ine won the other gold in the men’s triple jump.

Iruoghene Okoro won bronze in the men’s 200m and while Sarah Oluigbo also placed third in the women’s 400m hurdles to win bronze as well.

In table tennis Esther Oribamise and Azeez Solanke won silver in the mixed doubles event while Oribamise grabbed bronze in the women’s singles. Oribamise and Solanke lost to Egyptian duo Youssef Abdel-Aziz and Marwa Alhodaby in the final of the event to win silver.

Solanke had finished fifth after he lost by Abdel-Aziz in the quarterfinals of the men’s singles while Oribamise who lost to Alhodaby in the semi-final of the women’s singles bounced back to defeat Mauritius’ Jalim Nandeshwaree in the bronze match. Oribamise will represent Nigeria at the 2018 Youth Olympic Games in Buenos Aires later in the year.

Nigeria’s male volleyball team also won gold in their event and qualified for the 2019 FIVB U-19 World Boys’ Championship in Iran.

Nigeria beat Egypt 3-2 to clinch the medal and qualification. They defeated Tunisia in the quarterfinals and Algeria in the semi-finals.

The African Youth Games targets the 14 to 18 age group and is planned to contribute to the development of African sport and to the growth of Olympic values.

Iceland FA Boss Issues warning To Nigeria, Others: We’ll Shock The World Like At Euro 2016

Neymar Shines In Serene Amid Contemplation Of Incompetence