Members of Osun, Ogun, Oyo, Ekiti and Kwara States Houses of Assembly, as well as the Senator Representing Osun East Senatorial District, Babajide Omoworare have congratulated the Chairman, Osun Assembly Committee on Information and Strategy, Olatunbosun Oyintiloye on the Best South-West Lawmaker award 2016, conferred on him by the Federal Radio Corporation of Nigeria (FRCN)….”
Yusuf
Oduduwa 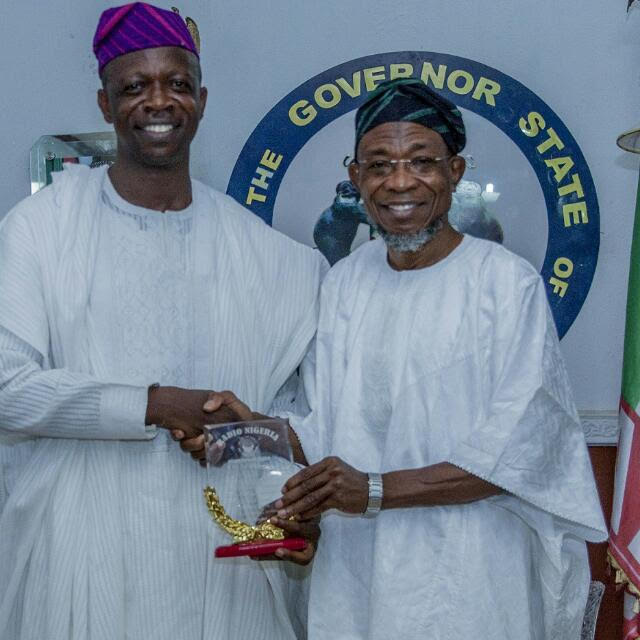 Members of Osun, Ogun, Oyo, Ekiti and Kwara States Houses of Assembly, as well as the Senator Representing Osun East Senatorial District, Babajide Omoworare have congratulated the Chairman, Osun Assembly Committee on Information and Strategy, Olatunbosun Oyintiloye on the Best South-West Lawmaker award 2016, conferred on him by the Federal Radio Corporation of Nigeria (FRCN).
In separate congratulatory messages through their speakers, the parliament said the honour on Oyintiloye was a well-deserved one.
The Speaker, Osun Assembly, Honourable Najeem Salaam said, the honour has confirmed the clear demonstration of Oyintiloyes commitment to adding value, especially in his legislative assignments.
He said, the honour was a well-deserved one, saying, it would encourage him and his colleagues to be more committed with the belief that somebody somewhere is watching.
Salaam commended the FRCN management for recognizing and rewarding excellence, diligence and commitment to community service.
Also, in a letter signed by the Ogun Speaker, Honourable Suraju Adekunbi, he said the honour was an eloquent confirmation of Oyintiloyes mastery of the job of information management of the legislative arm of government.
I wish to congratulate you on the well-deserved honour conferred on you by the FRCN. To me, it is a clear testimony to your stride in the State of Osun and Nigeria as a whole.
It is an eloquent confirmation of your mastery of the job of information fulcrum of the legislative arm and be assured of my standing in solidarity with you now and in the days ahead, Adekunbi said.
The Ekiti Speaker, Honourable Kola Oluwawole said, the award was a demonstration of Oyintiloyes commitment to the development of the grassroot.
He congratulated him and urged him not to relent in his efforts toward quality representation of his people.
Also, the Speaker, Oyo Assembly, Honourable Micheal Adeyemo said, the selection of the Osun lawmaker was not misplaced, saying, he actually deserved the honour.
He noted that this would strengthen the determination of other lawmakers in the South-west region and Nigeria as a whole to make meaningful impact in the lives of the people.
In his own, the Kwara Speaker, Dr Ali Ahmad in a letter said, Oyintiloye has become a pride of the legislative arm of government in his state and South-West in general, saying, the honour would be appreciated by those who believe in hardworking, diligence and commitment to grassroot development.
He said: With the little I know about Honourable Oyintiloye, he has always been committed to adding value, especially on media management and community development for which he was honoured.
Also, Omoworare, in a letter personally signed by him, said, Oyintiloyes recognition by the FRCN was an indication of his reputation as a season media practitioner and information manager.
Indeed, you are a source pride and inspiration to not just the people of Obokun, but the entire people of Osun. This award is a sound of an irrefutable confirmation that your appointment as the Osun House Committee Chairman on Information and Strategy is a classical example of a round peg in a round hole.
You have justified all expectations in the discharge of your constitutional duties as a quintessential politician. While I am convinced that this award is just the beginning of greater things to come, please be assured of my continue support, Omoworare stated.