Senator Isa Misau, Bauchi-APC, on Tuesday lent his voice to the trending social media outcry against the activities of the Nigeria Police Force’s Special Anti-robbery Squad, SARS. An hashtag #ENDSARS, calling for the scrapping of the police unit, trended on the social media over the weekend. Nigerians, who used the social media to recount their…”
Yusuf
News 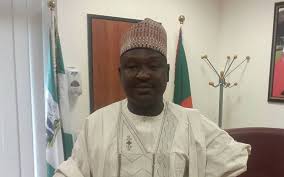 An hashtag #ENDSARS, calling for the scrapping of the police unit, trended on the social media over the weekend.

Nigerians, who used the social media to recount their experiences with SARS operatives, listed allegations of extra-judicial killings, wanton arrests and dispossession of properties through physical assault and other intimidation tactics.

Presenting the issue as a point of order, Mr. Misau said SARS has grown out of the authority of state police commissioners who are supposed to regulate their activities.

He said, “According to the Police Act and regulations, the force Criminal and Investigation and Intelligence, force CID, is the highest investigating arm of the Nigerian police. And for effective and efficient administration, the department is divided into 14 sections of which the Special Anti-robbery squad, SARS, is one of them.”

“SARS is supposed to be a section in each state command criminal investigation department with sole responsibility of handling armed robbery cases and answerable to the state commissioner of Police.”

Relaying experiences of Nigerians in some of the petitions he received, the former cop hinged on dangers of keeping a unit of the police force which has placed itself above the law.

“Mr. President, I have in the last few months received several petitions from my constituency against SARS. The complaints vary from extra-judicial killings, brutality, torture, arrest for bribe and other menacing conduct by the men of the unit.

“Most of the tweets with the hashtag, EndSARS, reported several cases of harassment, and arbitrary arrest of Nigerian youths labelling them Yahoo Boys.

“Mr. President, the complaints have ranged from how officers waylaid citizens at ATM points to how they often threaten to kill avowing they will get away with it. There are specific cases of how SARS officers allegedly murder citizens for declining to pay bribes.”

Mr. Misau said the Senate must take a bold stand on the issue and end the operation of SARS.

“It is dangerous for us to have a unit of the Police Force act as if it is above the law. We must now take a major decision to end SARS until a unit built around the rule of law and human rights observance is created by the police.”

Mr. Misau condemned the police’s reaction to the series of allegations against SARS.

Following growing outrage against the activities of SARS, the Inspector-General of Police, Ibrahim Idris, on Sunday ordered the immediate reorganisation of the notorious unit.

But the Senator is pessimistic about this move, noting that previous attempts by the police Force to sanitise the unit has proved ineffective.

“I’m aware that in 2015, the then IGP, Solomon Arase, had due to incessant reports of abuses by the squad split SARS into two units with a view to checking its human rights abuses. This was done to ensure that officers don’t make arrest and investigate the same case. However, the abuses have continued.

“The police high command had earlier said that it has no intention to scrap the squad and contrary to claims. Rather than to take note of complains by the general public, and proceed to investigate and take actions against these human rights’ abuses, they only make matters worse by calling these campaigners criminals,” he said.

He prayed that the Senate set up a committee to investigate the allegations of human rights abuse by SARS.

The Senate President, Bukola Saraki, noted that the issue should be given urgent attention as it affects many Nigerians.

“I think it is clear that something wrong is going on and it needs urgent attention,” he said.

The Senate referred the issue to the ad-hoc committee on security already set up.