“Nigeria has survived the mills of fussy rumour of the demise of a serving Senator Isiaka Adeleke as one death, too many, professing that the progressive vote pattern that determined the outcome of the July 7, 2017 Osun West senatorial bye-election will work for the governing party in the state, come September 22”. No one…”
Editor
News Op-Ed Osun 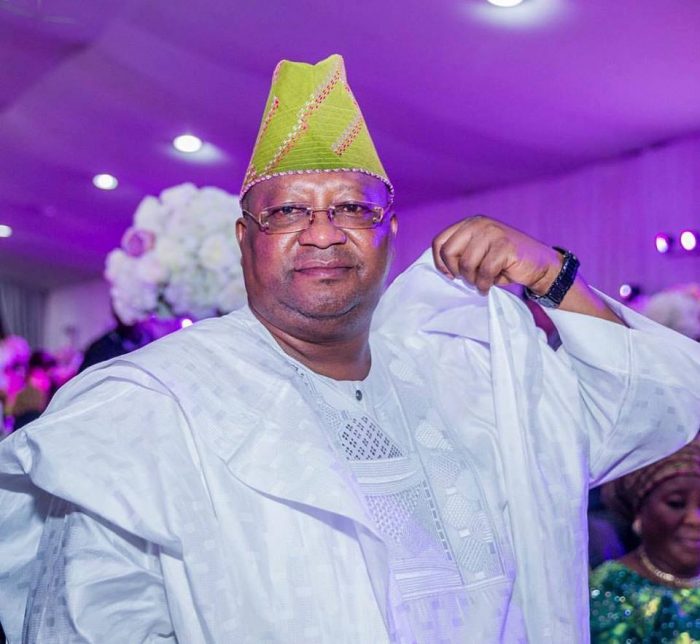 “Nigeria has survived the mills of fussy rumour of the demise of a serving Senator Isiaka Adeleke as one death, too many, professing that the progressive vote pattern that determined the outcome of the July 7, 2017 Osun West senatorial bye-election will work for the governing party in the state, come September 22”.

No one invoked voodoo, no mutual suspicion, no gulf of distrust, no face-off, no one did double–talk, and no brushed or unanswered questions; no one begrudged the other, no one at each other’s throat, never for once in a shouting match; no one rebuffed overtures for understanding, no one parried and toed heart–broken lines, or held personal differences to shared, heart–to–heart objectives; no one waged war on the other, eyeball to eyeball, calling names and slinging mud to warrant  truce; and no one violated civilized rules of interaction, neither did any of their common engagements degenerate into a carnival of altercations nor were there patch–works of dichotomy, hide and seek woven into any fragile fabric. Indeed, there was no rat race to outshine one another and no frosty, soured, thawed relationship to have pitted one against the other. Rather, they both oft-times attended a flurry of socio–political gatherings together, pleasantly characterized by exchange of polite, heart–warming words and clinging of glasses.

But suddenly, one of the two died like a candle in the wind; and politicians, decked in distractions in the State of Osun, Nigeria, hurriedly dusted their rumour grimmer, with rage like in a Mafia connection and swooped the death of one on the other. And in a twinkle, the rumour mill first spewed forth like a trickle, a whisper; and almost in firing succession, the rumour went viral, an uproar, the howling momentum of a mighty river, with the agility too difficult to fathom; and like a thunderclap, the rumour hanged the sudden death of Isiaka Adeleke, first executive governor of Osun and a serving senator from Osun West on Governor Rauf Aregbesola.

The foul of the unbridled rumour was such a disagreeable thing in the peaceful and accommodating Osun under the governing All Progressives Congress (APC) as the rumour, akin to the spindles of the Christmas Treelight, was a tempest in a teapot that sent missiles of mud in the direction of a clean slate. Aregbesola was at the receiving end of the rumour tangle, dropped like a basket of rotten eggs in a manner that splashed the rot with a velocity that over stretched Osun political elasticity and left the state infuriated, awe-stricken. And looking straight and unruffled, Aregbesola, in a posture of easy gait and cool mien, not one given to flippancy had his countenance underlined his dignified silence, unassuming innocence and solid resolve that never asked the rumour splitters for a retraction or apology. In place of stalling, he swiftly reconciled himself with the reality that the fussy rumour required proofs; he muscled requisite political will and took the rumour and the consequent ruin of the sensibility of Osun to Coroner Inquest as a way out of the quagmire, to unravel how Adeleke died if indeed his demise carried the imprimatur of one death, too many. And the Inquest became the plank for the understanding of the routes to Adeleke’s death, not a cudgel in the hand to declare a manhunt after anybody.

On the flip side, someone apparently wild, frivolous, mischievous, daredevilry in his warped mind steeped in morbid hatred for the Inquest, placed quick bucks on the Adeleke family that made them dramatically exhibit contra sensibility to the Inquest as sheer political brinkmanship and dismissively branded the Inquest a hollow ritual of loose ends and political hype, sort of political frenzy, vicious enough to have made the Inquest a deadlock of the opposites: one was the family, the insular; and the other, Aregbesola, the  bridge-builder. But the satanic man failed to impugn on the integrity, competence and public acceptability of the Inquest.

As I remember today with a profound sense of bad loss, the late Senator Adeleke who died a year ago, I am convinced that the spectral of his death set tongues wagging though, it was irreconcilable to hang his demise on Aregbesola  and cause social convulsion as a result by mechanical aggregation of protesters whizzing sounds of flying stones, stoking wild fire, muttering inanities and singing war in a Desert War style, that did no honour at all to the well-known simplicity, civility and non-abrasive nature of the departed good senator. It was one death that revealed Aregbesola’s wrinkles of pain. At an Ogbeni Till Day Break, the governor-public interactive forum in Osogbo, the state capital, Aregbesola, in a huff made titanic efforts that explained in brevity why and how he could not have known anything about the senator’s death. And the audience hung on his lips in studied attention as he spoke visibly at pain!

The triad of the deceased family’s furrows of worry, Aregbesola’s pain in the marrow, and the haze–the heat–the hurt of the rumour in Osun pined away as the cause of the death of Adeleke, initially shrouded in a pall of secrecy was made public at the Inquest.  “There were no tracks of poison in the system of the late senator. The deceased had administration of overdose of sedative and analgesic by intravenous means which action was hastened by the presence of alcohol in the system,” the Coroner’s findings stated. The verdict of the Inquest removed the heavy, clumsy and superfluous lid on Osun; and the rumour, its maze, rubbish, and the pain in Aregbesola, all burst asunder.

In his two-term in office, Aregbesola never treated rumour mongers on the same wave length with distracters, character assassins like an unwanted egg which ‘meat and shell,’ you throw away. But they have on their own chosen to stand aloof like a lid from the bow with sinister motive always to distort, misrepresent, manipulate and soil the banner of Aregbesola by all sorts of riffraff, having only one strategy, always a rehash of the old banality and polemics, abandoned shams and sallies or witticisms, senseless jibes and babbles, and wretched yelps and subterfuge to annex Aregbesola and his government.

As I fondly remember our good party man, the late Distinguished Senator Adeleke, Osun has survived the rumour and its stings that trailed his death. I know of no job more fatiguing, more thankless and most disgusting than the trade of the oppositions in Osun, toiling and moiling with prodigious efforts through that filth and inventing and paddling rumours and distractions here and there, intent to scuttle, stifle the September 22 massive votes configuration for the governing APC. The same established progressive vote pattern that determined the outcome of the July 7, 2017 Osun West Senatorial bye–election in the state will readily work for APC in the forthcoming governorship poll in the state, to be further determined by such factors as the party’s acceptable candidate, its issue–based blitzkrieg, and the empirically tangible development projects–the Osun untypical utilitarianism – the greatest happiness for the greatest number of Osun people, in contrast to the Peoples Democratic party (PDP)’s typical bujebudanuism – the greatest waste of happiness for the greatest number of Osun people in the PDP’s yesteryears that also engendered the tyranny of the privileged few over the suffering majority in the state, which the party chieftains, the PDP wastrels at the national level have now profusely regretted and apologized to Nigerians. Nemesis on the prowl! But penitence or no penitence, PDP will never come back in the Bola Ige House, Osogbo.

Rather, the Osun electorate high sense of appreciation of the heroics of Aregbesola in the art and science of people-driven governance, with audible developments in the state will handsomely pay off, count down to the September 22 pay back time.

A Letter To Chief Olusegun Obasanjo Phd, The Man Of Many Letters By Dr. Ugoji Egbujo