Senate To Facilitate Refund Of N24.6bn Spent On Federal Roads In Osun

By Saindat AbdulRouf Nigeria Senate has assured that it would assist the government of Osun to get the refund of N24.6 billion spent on the construction of federal road across the state. This is as the Senate Committee on Works scored the intervention of Osun Governor, Rauf Aregbesola high on road construction across the length…”
Yusuf
featured Osun 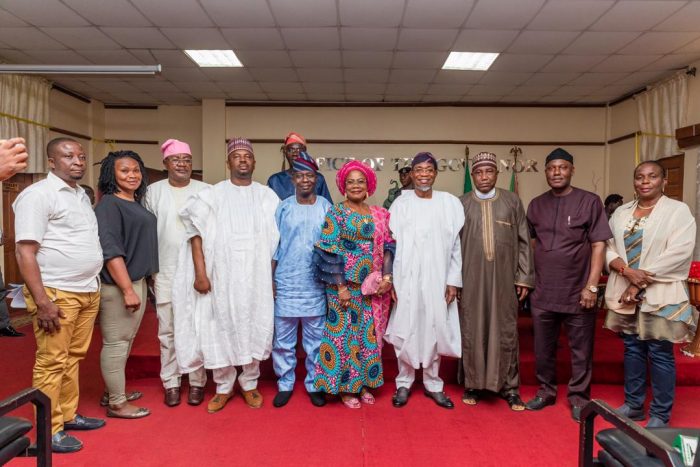 Nigeria Senate has assured that it would assist the government of Osun to get the refund of N24.6 billion spent on the construction of federal road across the state.

This is as the Senate Committee on Works scored the intervention of Osun Governor, Rauf Aregbesola high on road construction across the length and breath of the state in a bid to drive economic development.

These were the messages by the Senate committee on Works led by its Chairman, Senator Kabiru Ibrahim Gaya during the committee’s nationwide oversight visit and inspection of all federal roads in the country.

Senator Gaya pointed out that members of the committee had been to about 28 states of the federation by road and have seen the deplorable condition of most of the federal roads, sighting the Ogbomoso/Osogbo road as example of such road which something urgent should be done about.

He commended the efforts of Aregbesola on the Osogbo/Ikirun/Kwara boundary road as well as the Osogbo/Gbongan road, expressing delight that the roads are done to the specifications of the Federal ministry of works. Gaya said, “moving round Osun, we discovered that the state government has made tremendous effort on the Osogbo/Ikirun/Kwara boundary road and the Osogbo/Gbongan road. I promise that we will do everything possible to ensure that the funds for the roads are refunded as soon as possible.

“The roads within the state are mostly used by people in the state for their day to day activities which leads to economic development of the state, that’s why I want to sincerely commend Aregbesola’s decision to embark on the project.

“It means a lot for the governor to take the courage to embark on the construction of federal roads, it means that he means well for the people and he is passionate about economic growth and development of his state”, he stated.

The Senator who frowned at the deplorable condition of the Osogbo/Ilesa road promised that all contractors handling federal roads who have not done well will be brought to book anytime from now.

In a remark, Governor Aregbesola commended the President Muhammadu Buhari-led federal government for his efforts at moving the nation forward despite the tough economic situation the president inherited. He said President Buhari has shown the passion to move the country forward in the past three years, while also commending the efforts of the Senate committee on works for striving to get quality job done on federal roads across the country.

Aregbesola who pointed out that infrastructure especially good roads are key to economic growth stated that nobody can underestimate the power of road to development.

The governor said his administration went into massive road construction because of the need to get the state out of the doldrums of backwardness and underdevelopment which the administration met it eight years ago.

Appealing to the committee to urgently do something about the Osogbo/Ilesa road, the governor explained that his government would have touched it, but because it has already been awarded to a contractor.

The governor said, “I want to appeal to you to quickly do something about the refund of the funds we have spent on federal roads in the state.

“We have committed about N24.6bn on federal roads across Osun, and out of this, N13.2bn has been captured and approved by the Senate but we have not been paid. We are happy that you are promising to assist us in getting the refund.

“We went into the massive construction of roads including federal roads because of our firm belief that no meaningful development can take place if there is no infrastructure, especially good roads on ground”, the governor restated.