Cristiano Ronaldo scored as Juventus bounced back from their midweek Champions League defeat by Manchester United with a 2-0 win over 10-man AC Milan in Serie A on Sunday, as Gonzalo Higuain missed a penalty before being sent off for the hosts. Mario Mandzukic headed in the opener in the eighth minute at the San…”
Yusuf
Sports 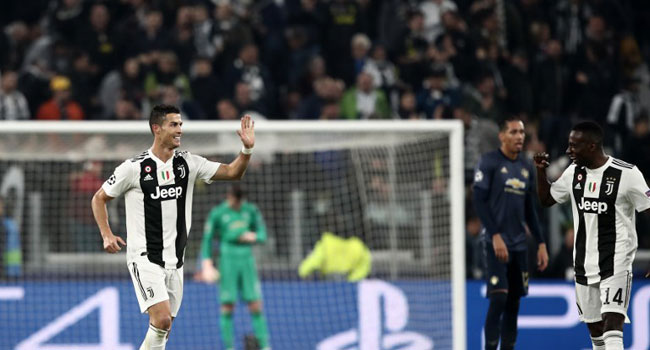 Cristiano Ronaldo scored as Juventus bounced back from their midweek Champions League defeat by Manchester United with a 2-0 win over 10-man AC Milan in Serie A on Sunday, as Gonzalo Higuain missed a penalty before being sent off for the hosts.

Mario Mandzukic headed in the opener in the eighth minute at the San Siro with Ronaldo adding a second on 81 minutes as Juventus maintained their six-point cushion ahead of the international break.

It got the defending seven-time Serie A champions back on track after suffering their first defeat of the season by United following two late goals despite Ronaldo’s stunning volley.

“Winning tonight was the only way to put aside what happened in the final five minutes of the Champions League game,” said Juve coach Massimiliano Allegri.

“It was important to win without conceding a goal and to regain the six-point advantage over Napoli who are having an excellent championship.”

A third loss of the campaign, however, saw AC Milan drop out of the Champions League places behind Lazio who moved back into fourth despite a 1-1 draw at Sassuolo.

Inter Milan’s seven-match winning streak ended with a 4-1 defeat at Atalanta, with Luciano Spalletti’s side losing second place to Napoli who came from behind to beat Genoa 2-1 on Saturday.

Juventus have 34 points from 12 games — six ahead of Carlo Ancelotti’s Napoli with Inter a further three behind.

“I’m very happy, especially for the team, because playing away to Milan is always very difficult,” said Ronaldo.

“It was important to win, because Napoli beat Genoa last night and we had to keep our distance.”

Allegri’s side rarely looked threatened by AC Milan with Mandzukic rising highest to nod in an Alex Sandro cross to dampen spirits among the 75,000-capacity crowd at the San Siro.

The Croatian World Cup runner-up could have made it two shortly after, meeting across this time from Ronaldo but Milan skipper Alessio Romagnoli blocked.

Higuain returned from a back problem to face his parent club but it was to be a nightmare outing for the forward who had been loaned out to Milan last summer to make space for Ronaldo.

The Argentine missed a penalty awarded after Medhi Benatia handled in the area five minutes before the break with Juventus goalkeeper Wojciech Szczesny tipping the ball onto the post.

Ronaldo tested Gianluigi Donnarumma in the AC Milan goal early in the second half before finally blasting in nine minutes from time for his first goal at the San Siro.

Minutes later Higuain saw red after shouting at the referee in frustration after a foul on Benatia, and was led off the pitch in tears.

“I told him not to exaggerate, to calm down and not to risk a major penalty,” said Ronaldo of what he told Higuain on the pitch.

“He was nervous, he was losing, but we must not blame him, he didn’t say anything.”

Mancini headed home in the 62nd minute to add to Hans Hateboer’s eighth-minute opener, with Berat Djimsiti and Alejandro Gomez sealing all three points for the hosts late on.

Inter captain Mauro Icardi had equalised when he slotted in a penalty just after the break, but his side finished with ten men after Marcelo Brozovic was sent off two minutes into injury time.

Roma got back to winning ways with a 4-1 success over Sampdoria to move up to sixth, within three points of the Champions League places behind Lazio and AC Milan.

Rock-bottom Chievo earned a 2-2 draw at home against Bologna to move onto zero points, having had three deducted for false accounting.

But coach Gian Piero Ventura told players he was quitting after the game, as he did not believe he could save them from relegation.

Elsewhere, Empoli got their first win since the opening match of the season, beating fellow strugglers Udinese 2-1, who they joined on nine points.