This is one piece I wish I did not have to write. But our penchant for feferity and spectacle at the highest reaches of our public life leave me no choice. As long as this obtains and I have breath in me, I hope I do not fail to call us to account when this…”
Editor
Op-Ed 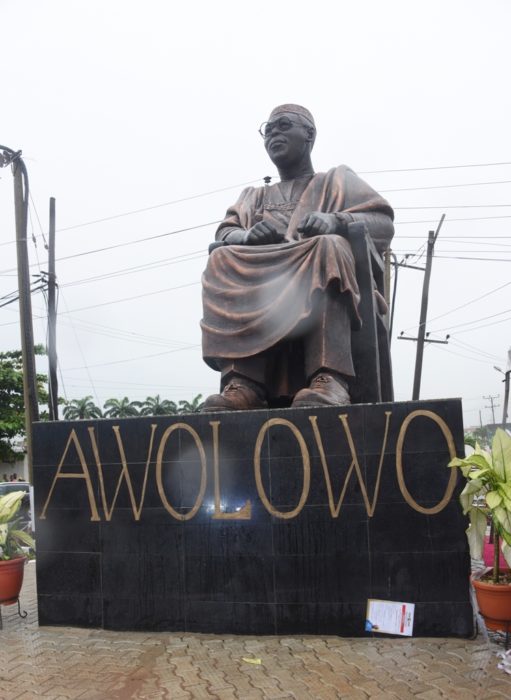 This is one piece I wish I did not have to write. But our penchant for feferity and spectacle at the highest reaches of our public life leave me no choice. As long as this obtains and I have breath in me, I hope I do not fail to call us to account when this penchant gets the better of us. Even if this does not resonate for many of us at the present time, my hope is that the future would at least find a record of dissenting voices insisting that we do right by ourselves and our posterity.

I woke up this morning in central New York State to the spectacle carried live on TVC News—thanks, TVC—of Akinwumi Ambode, the governor of Lagos State, flanked by the usual retinue, performing the unveiling of the new statue of Obafemi Awolowo. The new statue replaces a previous one that stood at Allen Avenue in the state capital, Ikeja that had been torn down.

I congratulate the governor and his executive on honouring Awolowo’s memory by commissioning this public monument. More Jeleen to their elbows. And had I not proceeded to read newspaper reports of the ceremony, specifically, Ambode’s address to the gathering, this piece would, perhaps, not have been written. The main points of the speech reported in The Nation newspaper, online edition, are at variance with what I believe a proper monumentalisation of Awolowo should look like. In other words, we have the right honoree, but, sadly, the wrong monument.

Public, physical monuments do not teach history. All the things that would enable Ambode and his fellow leaders in the western part of Nigeria he exhorted in his speech to do the things that would really advance Awolowo’s legacy beyond material embodiments in statues are precisely what I find lacking in repeated celebrations and invocations of Awolowo in our public life.

I have nothing against statues but I am convinced that a world in which there are more plaques commemorating Awolowo than schools, research centres and organisations studying his ideas and enshrining them in the imagination of future generations and the leadership they will furnish; or scholars, not hagiographers, dedicated to studying his ideas, is a world in which Awolowo’s memory is dishonoured and his ideas ignored, if not abandoned.

A word of caution here. However much we love plaques, we must not forget that it is a homonym of the plaque that our dentists are dedicated to removing when they afflict our teeth. All it takes is a parvenu, culturally illiterate future governor to tear down this or any other monument and remove the plaque just placed on it. It has happened before and, in light of our political culture, it will happen again.

But certain things are invulnerable to removal or the excesses of uninformed executives in public office. Indeed, the deeper the roots in the imagination, the more committed the workers in the vineyard of Awolowo’s ideas and their continuing relevance to the history of ideas, the more likely it is that future parvenu governors will have a difficult time toppling statues and removing plaques. Even when they do, more people will continue to live under the inspiration of those ideas and, therefore, be less agitated by the vagaries of a monument that remains forever vulnerable to the weather and human shenanigans.

I would like to use two excerpts from Ambode’s address to make the core point of this piece. According to him, as reported in The Nation, “Thirty years after his death, his thoughts and ideas on a wide range of issues relating to the economy, fiscal federalism and education among several others, are still relevant today as they were back in time. His legacies and landmark achievements, particularly in the Western region including Lagos colony, had endured and remain a source of inspiration and benchmark for progressive leadership in the country.” Further, “the vision of new generation leaders like us, is to consciously rise up to his ideals and principles.” [http://thenationonlineng.net/leaders-imbibe-awo-ideals/ (27/09/2017)]

In the two quotes, certain words stand out: “thoughts and ideas” and “ideals and principles”. If Awolowo’s thoughts and ideas as well as his ideals and principles are not only relevant but are also supposed to inspire “the vision of new generation leaders like [Ambode and others]”, one is welcome to ask where they—governors, civil servants, journalists, etc.—who dominate our public life and discourse are learning those ideas and ideals from. I am sure they are not receiving their inspiration from mute and inert statues.

In case Ambode and his colleagues need a reminder, ideas are not free floating like air to be inhaled from the atmosphere. They are to be nurtured, cultivated, and carefully disseminated. Given that Awolowo left us a sterling legacy of significant writings, one would think that those who are really motivated to be inspired by him would do the needful, especially if they are leaders and in control of the direction of the society, and invest in platforms dedicated to the study, development, diffusion of ideas and principles for which Awolowo is justly celebrated.

On this score, forget our universities. What think-tanks or similar institutions exist where those who are interested in Awolowo’s ideas and principles can go and be edified? Who are the experts and scholars, interpreters for the rest of us, of Awolowo’s recondite ideas, that the leadership in Awolowo’s backyard has trained, whose research it has supported and whose intellectual products have been disseminated, if only in the schools and institutions located there?

Mr. Ambode, whatever happened to the Obafemi Awolowo Institute for Governance and Public Policy located in Lekki and which was meant to do exactly the kinds of things that are sure to make Awolowo’s legacy available to future generations and make those who pass by the new statue better informed of why that new statue matters and become more appreciative of the ideas that are really the soul of the cold stone on a pedestal?

Yes, the Awolowo Institute is exactly the kind of monument that would ensure the prolongation of the legacy of Awolowo; the new statue will not. I went back to check the website of the institute before I started writing this piece and it is a shame to the memory of one of the foremost thinkers of thelast century.

If you were totally unaware of who Awolowo was and you are looking to be introduced to why his ideas matter—not just because he was a preeminent Yorùbá leader, a knock, if there is one, on his global status—that apology of a website for a state-sponsored think-tank is a sure turn-off. A stone image can only complement a legacy; it cannot be a substitute for it.

As for Awolowo’s thoughts and ideas being a source for current goings-on in the administrations of his self-appointed successors in our part of Nigeria, only one who is ill-informed would even think that, beyond mouthing platitudes and mimicking raiment, anyone, repeat anyone, of them has the foggiest idea of Awolowo’s philosophy of anything from management to statecraft to education to culture.

Who among the governors can claim to have any familiarity with Awolowo’s federalism, the subject-matter to which he devoted a substantial percentage of his writings? If they are, what would explain their recent canvassing of a return to a 1963 Constitution that Awolowo made clear fell short of what federalism should be; that was used cynically by his opponents to excise the Midwest while (1) leaving the northern behemoth untouched and (2) pretending to be solicitous of the rights of the minorities in the Western Region but not anywhere else in the country?

I hope that no one believes that Awolowo was uninformed of the merits of the 1963 Constitution. Yet, he called for its substantial revision both in Chapter 3 of Thoughts on the Nigerian Constitution (Ibadan: Oxford University Press, 1966) and in Chapter 10 of The People’s Republic (Ibadan: Oxford University Press, 1968). I know at least one Nigerian political leader who was also an intellectual who turned Thoughts on the Nigerian Constitution into a constant companion in his struggle for the emancipation of the Ogoni. Does anyone remember Ken Saro-Wiwa? That was one man who took to heart what Awolowo’s theory of federalism entails.

There is no way that any serious student of Awolowo would permit her/himself to embrace the illiteracy that informs the so-called debate on restructuring in Awolowo’s backyard right now.

Have our governors in the West studied Awolowo’s philosophy of education? Have they studied Awolowo’s management strategies? These are not rhetorical questions. How many “model schools” did Awolowo build? Could as many of us as benefitted from his educational philosophy and policies have done so had he settled on building a handful of “model schools”? How many schools did Awolowo merge or vacate for other uses?

Do our new generation leaders know anything about decentralization, local government, and empowering those units not for donating boreholes and handing out Christmas and Sallah rice, but for providing agricultural extension services by graduates of Schools of Agriculture; health services by graduates of Schools of Hygiene and Health Technology; education through Local Authority Schools Boards; and so on?

I make bold to say that it is because the transmission chains for knowledge from previous to succeeding generations have been broken that the current generation of leaders are often found wanting when it comes to performance. It is why a South-South governor would think that he has made a discovery in his grandiose announcement of a collective farming scheme modelled on the Israeli Kibbutz system. Had the Obafemi Awolowo Institute for Governance and Public Policy and similar outfits been doing their work of guiding and supporting serious engagement with Awolowo’s ideas, that governor would have known of the Farm Settlement Scheme, the role of Modern Schools in the programme, and how those settlements were integrated into governance and the economy.

Additionally, he would learn of the role of the Cooperative movement, introduced to Nigeria by Awolowo, supported and informed by a whole intellectual bureaucracy atop which sat the Cooperative College—state institutions, by the way—the Cooperative Bank and the panoply of Cooperative Thrift and Credit Societies, that ensured economic expansion to the remotest of areas in the old region.

I would like to congratulate Ambode, again, on raising a statue to Awolowo. But we need monuments of a different kind, sir. If you really want to build monuments to the man, build monuments that need no plaques on them, that cannot be toppled by future vagabond executives, that will ensure that his ideas and thoughts, ideals and principles, are shared, expounded, debated, criticized, and widely diffused through all the institutions where minds are molded and the future is prepared.

Make resources available for scholars, young and old, wishing to study and write on Awolowo’s ideas, supporting the publication of books and journals of significant academic merit dedicated to critical engagements with Awolowo’s and similar ideas. These can be in form of fellowships, residential and nonresidential, regular conferences, and huge material support for academic publications.
From the vantage point of an Awolowo scholar, those are the monuments that would please Awolowo, even if they do not bear his name. I can only hope that I am not mistaken.

Trump Is Delusional, He Lies All The Time – Bernie Sanders

The Making Of A Leader: Ogbeni @61