Re: Celebration Of Mediocrity BY Inwalomhe Donald

I want to describe several allegations leveled by Yemi Adebowale of Thisday Newspaper as crass ignorance and ill-informed. It shows that he is actually acting the script of the opposition in Osun State. Governor Rauf Aregbesola deserves commendations rather than subjective criticisms because he has turned Osun to a construction site and attracted development to…”
Editor
Op-Ed 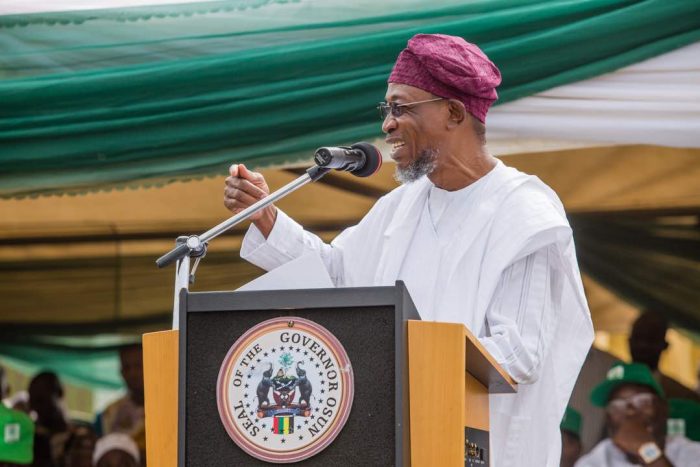 I want to describe several allegations leveled by Yemi Adebowale of Thisday Newspaper as crass ignorance and ill-informed. It shows that he is actually acting the script of the opposition in Osun State. Governor Rauf Aregbesola deserves commendations rather than subjective criticisms because he has turned Osun to a construction site and attracted development to the state.

Adebowale ought to cover his face in shame for his piece, having failed to see the giant strides and the rescue agenda in Osun. This is a signal that the platform he is using should be careful with him, as he is using the name of the newspaper to work for the opposition party.

For some time now, I have resolved to ignore Adebowale’s vituperations and his opposition co-travelers not because of his obstinacy, but for his deliberate attempt to distract Governor Aregbesola in the discharge of his statutory responsibilities to the people.

By now, I thought he would have grown up and shed himself of his infantile mentality to understand the nuances and dynamics of governance particularly in a state like Osun that was completely crippled by the shenanigans of his group, demagogues, but his persistent ignorance makes a refresher course a compelling need.

While I am of the opinion that constructive criticism is an integral part of the democratic order and governance process, doing so with so much ignorance and feeble knowledge creates more problem of misinformation for the larger society.

Let it be placed on record that Aregbesola embarked on global initiative aims at supporting capacity building in Osun and the rest of Nigeria to advance future leadership, focusing on sustainable global development by investing in human capital. As a symbol of national development, he introduced Sukuk Islamic bonds issuance programme to help fund big infrastructure needs in Africa’s biggest economy. Aiming to tie the transaction to one of several projects, Aregbesola has signed a Memorandum of Understanding (MoU) with a Chinese firm, Jiangsu Wuxi Taihu Cocoa Food Company Limited, to establish a N216 billion industrial park in Osun state.

The new Osun Airport makes Nigeria to save N22bn annually which is one of the lessons this strategic mega project taught Nigeria. When the first phase of MKO Abiola International Airport, Ido Osun in Osun state is completed, the facility will save the country a foreign exchange of N22 billion per annum.

Osun elementary schools were over-crowded, a perfect environment for diseases and deaths before Governor Aregbesola became the Governor in 2010. By 2016, the story has changed as representatives of various states in Nigeria, at the end of a three-day study of the Osun School Feeding Programme, vowed to use the template set by the state. They concluded that the Osun government had set a good template for the implementation of the nationwide school feeding programme.

No doubt, Osun has set a standard for both the 36 states and Federal Government of Nigeria to follow. Federal Government of Nigeria is building on progress made by the state government on School Feeding Programme. The Governor has transformed Osun schools from obscurity to limelight. Osun has built standard schools and produced nutritious meal for school pupils. The Osun government’s effort in the education sector has removed the dilapidated and neglected school buildings and replaces it with a conducive learning environment. Of the infrastructure upgrade under the first phase, the government has successfully commissioned Elementary Schools,  Middle Schools, and High Schools.

While there is a decline in Nigeria’s annual production of cocoa , Aregbesola has encouraged Osun cocoa farmers in Ondo, Edo, Delta and other southern states to boost cocoa production which has led to the expansion of Ede Cocoa Processing Plant which is the only functioning plant in Nigeria today. Aregbesola has re-ignited national interest in cocoa production by partnering with a Chinese firm to reactivate cocoa processing plant. Another lesson is that Aregbesola has turned cocoa to a vital product which contributes immensely to Osun economy and the welfare of the people. He has used cocoa to create an economy and other enterprises which has risen beyond producing raw cocoa by turning it into intermediate or finished products. Ede cocoa processing plant has moved from transition of a primary commodity exporter to an industrial producer. The plant has become strategic for national economic development and created incentives for cocoa industry in Nigeria. The incentives to return cocoa farmers to their farms have now been created.

But typical of Adebowale, already used to cheap propaganda, if he does not mention such humongous sum, such vacuous story would not soothe the sheer hollowness of his thoughts. He and his group presided over a regime of squandermania, kleptomania, crass brigandage and outright plundering of the economy to the extent that even Federal Government could not pay salaries of workers and pensioners.

He belongs to an era of financial recklessness and leadership atrophy that asphyxiated our collective enterprise. As a product of such cabal of economic predators, one wonders where Adebowale and his co-travelers derive the morality to even utter a word about due diligence and accountability.

The era of Aregbesola is one that has altered the sorry narrative of Osun to a more dignifying, edifying and superlative emanations. It is a narrative of development in the face of poor revenue occasioned by Adebowale’s group fat-cats who looted the treasury blind and annihilated the states of the Federation.

Now that Osun is working again, a thousand Yemi Adebowales cannot distract Aregbesola from delivering his electoral promises to the people who gave him their overwhelming mandate to lead them.

The Beautiful Ones Are Now Born