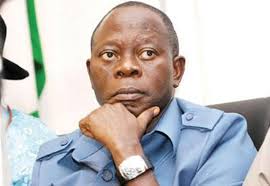 President Muhammadu Buhari has extolled the former governor of Edo State, Adams Oshiomole on clocking the age of 70 by Monday April 4, 2022.

Adams Oshiomole who served as the APC Chairman ensured President Buhari returned to Aso Villa for a second term in 2019. In the President’s message to the former APC Chairman, he described him as a person willing to dedicate himself for the greater good of the country.

“President Buhari believes Comrade Oshiomhole’s leadership strides in various sectors will stand the test of time, deploying his time and strength to the good of workers and Nigerians as a labour leader, Chairman of the Nigerian Labour Congress, and accepting the call into politics to serve his state.

“The President notes the mental soundness and experience of the former APC leader, willingly dedicating himself for the greater good of the country, and acting as the voice of the voiceless in different ramifications.

“As the former Governor turns 70, the President prays for good health, and continued service to God and humanity”, the statement reads.

EDITORIAL: The End Of Empires